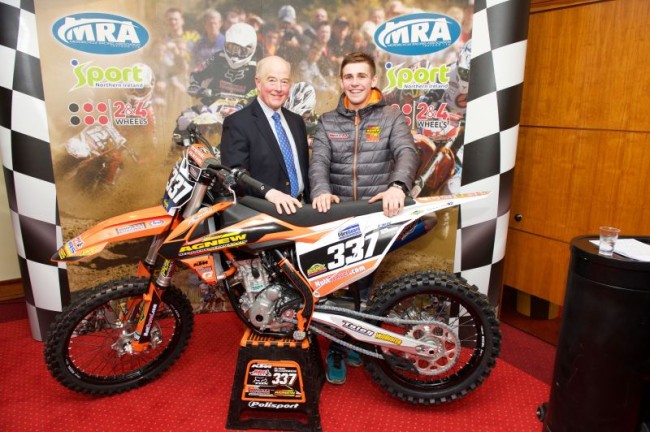 The 2016 MRA Motocross Championships were officially launched at a Press conference held at the Island Centre in Lisburn last week.

The big news for 2016 is the introduction of a new marketing strategy for the Ulster Solo Motocross Championships to stimulate interest in the media, and excitement amongst riders and spectators.

Highlights include a new logo to brand the Championships, new signage to the tracks and at the tracks, including banners, flags etc., a dedicated website for the Championship at www.ulstermx.com, dedicated Facebook page and Twitter feed, advertising in local papers leading up to the events, and video highlight packages created by Neil Mckeown of T9 images which will be available after the event.

The idea behind this is to increase the size of the gates, with last year having poor entries particularly in the Premier Class, this should provide better racing for the riders and spectators.

Also at the event, popular Comber rider Wayne Garrett announced his return from retirement/injury, and we all look forward to seeing Wayne in action again on his 350 KTM.

His long time rival Lisburns Richard Bird announced that he will be competing in both MX1 & MX2 in 2016, the reigning Irish Champion looking fit and well, said that it had been five or six years since he last raced in MX2 but was looking forward to taking on the ‘youngsters’.

The Championship kicks off in March, and we will keep everyone updated on positions, gossip and all the action during 2016.