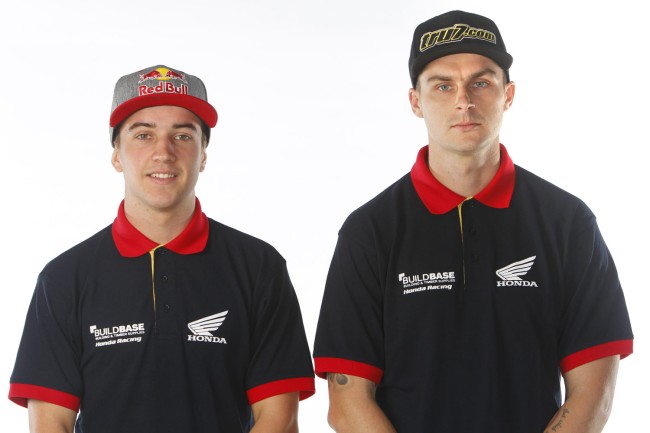 With Graeme Irwin and Martin Barr both leaving the set-up after two very successful seasons, Dave unveiled his new star signings at the International Dirt Bike Show on Saturday.

Jake, 27, is tasked with winning the Maxxis ACU British Motocross Championship and Michelin MX Nationals MX1 titles on a CRF450R while rising Kiwi star Josiah will go for domestic championship glory in MX2 on a CRF250R. He will also race selected EMX250 rounds.

“I’m very excited,” said the three-time world 500cc champion. “We’ve won the Maxxis this year and we want to continue to win it and Jake is one of the few people out there who is capable so we were really pleased to be able to sign him.

“With Josiah, to be honest, I was really surprised that he became available. As soon as I started to talk to him it was a no-brainer. He’s 18 years old, he’s only going to get faster and we’re really looking forward to working with him.”

Jake led this year’s Maxxis series after two rounds before an injury sustained at the Italian GP sidelined him for most of the season and persuaded him to retire from world championship racing.

“I decided this year I wanted to get away from grands prix,” said Jake. “Obviously, I wanted to get set up with the best team and get the best deal and have the best chance of winning and Dave’s unrivalled in that department.

“For years I’ve wanted to ride for Dave but he’s always been a national team and I’ve always had my mind set on GPs. When I made the decision to step back from GPs it was a case of getting something sorted as soon as possible and he was as keen if not keener for it.

“I’m really optimistic about next year. I just want to get back to enjoying my racing so, yeah, I’m excited. Dave’s focus is on the UK and he’s geared up for exactly that – I’ve only been with the team for two days and already I’ve got two bikes, I’ve got parts, I’ve even got goggles and tear-offs.”

Josiah, who’s raced in Europe since 2014 and won the Latvian round of the EMX250 championship this season, has his sights set on the top step of the podium.

“The goal is to win,” he said. “I don’t think Dave or myself expect anything less and I’m stoked to sign with him. When Dave came to me everyone I talked to about it had only good things to say so it didn’t take me long to decide.

“I’ve really been welcomed by everyone and it’s a real good feeling going into my winter training programme.”