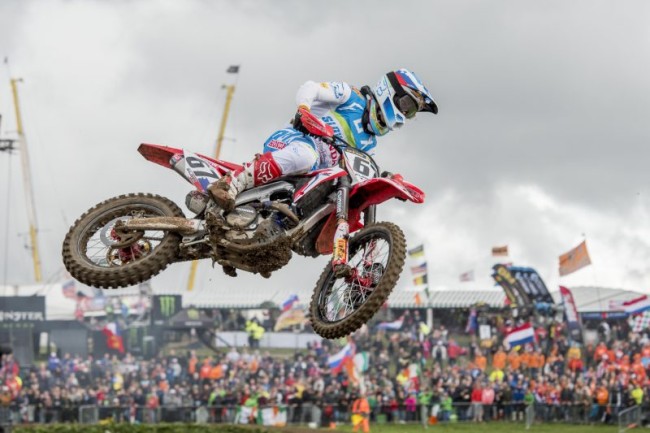 Zach Osborne was the star of the show on Saturday after a simply stunning ride through the field and a last lap battle and pass with MX2 rookie sensation Hunter Lawrence to win the MX2 moto!

Osborne admitted in the press conference even he didn’t expect to win the moto when he got to second, but former British champ and current US champ pulled the pin and set some blistering lap times to reel in Hunter Lawrence in front of a cheering British crowd who took Zach to their hearts during his stay in the UK.

Osborne in this form gives the USA a real chance tomorrow.

But big credit to Hunter Lawrence who didn’t give in without a fight and dropped his lap times to fend the American off showing just how much potential the talented Aussie really has.

Tim Gajser was also very impressive with a dominating win in the MXGP moto that included Tony Cairoli, demonstrating a his mental strength and determination after his tough year to help lead team Slovenia into the A final for the first time in number of years.

A mention also must go to Max Anstie, who passed Tony Cairoli around the outside before leaning in on the 2017 world champ to make the pass for third, only to collide with a back marker in mid-air on the last lap and lose third place in the process. Fortunately Max was able to remount and finish in fourth.

In the open class Jeffey Herlings simply ran away with it and we will have to wait until the final moto of the day to see him take on an in-form Tim Gajser and a no doubt motivated Antonio Cairoli.

Aussie Kirk Gibbs rode fantastic to take fourth ahead of Dean Wilon and ensure the Aussie’s are in the hunt for at least a podium tomorrow.

British champ Graeme Irwin finally got to show his speed on the world stage with a fine eighth place and holding off a charging Tanel Leok as they both started to reel in Thomas Covington towards the end of the moto. Team Ireland had a great day with a determined Martin Barr mixing it with the GP boys to take 14th in MX2 and Stuart Edmonds and good performance with 19th in MXGP – but the ambitious Dubliner wasn’t happy with his performance and wants more tomorrow! It meant 13 overall for the Irish and no B final in 2017!

The crowd was huge and they got behind team GB all day and with a solid performance from all three, the host country are definitely in the mix for the win.

But Saturday’s racing if anything,g added more confusion and option for predicting Sunday’s winner! Jeremy Seewer took a fine third in MX Open on the 450 to prove Switzerland are real podium contenders while Australia have to be seriously considered a podium threat if Lawrence gates well tomorrow. Add in the USA, GB, Netherlands, France, Belgium and even Italy – this really is one of the most wide-open in recent history.

With an even bigger crowd and the likelihood of some showers expected tomorrow- the only thing predictable is that it will be an epic day of racing!