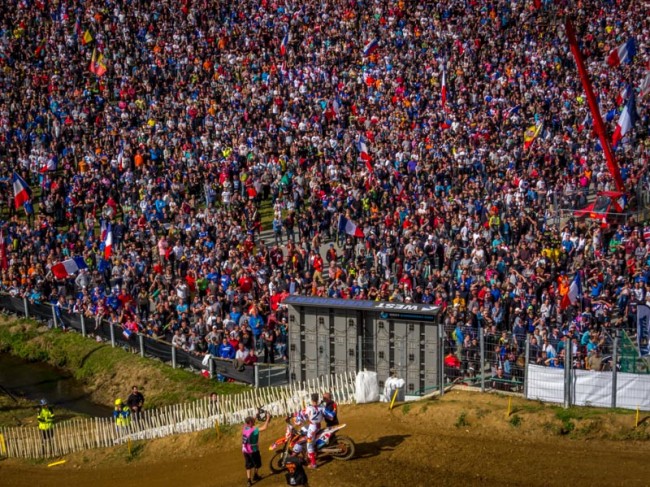 Team France gave the rest of the world a riding lesson in front of their rapturous home crowd to win all three motos.

Gautier Paulin worked his way past Ken De Dycker before reeling in a very impressive Ben Townley and taking the lead. Paulin said: ‘The crowd were crazy, I was riding easy the last few laps.’ And admitted he wanted to try an avoid
collisions with the very slow backmarkers.

Marvin Musquin simply dominated race two, grabbing the holeshot and pulling away from his AMA rival Martin. The happy
Frenchman said: ‘I had a great start, I was really happy about it, I wasn’t expecting it! This track is really tricky, there are many lines and it’s getting really bumpy and rutted, it’s easy to make a mistake out there.’

Race three was another Cooper Webb/Romain Febvre battle with the Frenchman running the American down for the third time in a week. Webb fought hard though, passing Febvre back but the Frenchman couldn’t be stopped, passing Webb back and pulling away for the win.

Febvre somewhat shockingly said he didn’t feel as good as he wanted too and is hoping to feel better tomorrow. On his battles with Webb he said: We had a nice battle, in the USA it was really clean so I have nothing to say about that but this morning (in practice) he tried to follow a quick lap I make, I saw that and slowed down and he came and block- passed me on the downhill. So I did the same to him in the next corner, so we need to be careful when he is behind for sure.

It was heartache for Great Britain after Shaun Simpson collided with an errant backmarker on the last lap of the MXGP race and went down while in fourth on the last lap. The Brit had been holding off Barcia but got up with a sore arm and finished eleventh with a rear brake issue.

Things got even worse for GB in race two though. Poor Max Anstie was running third just behind Martin when he had a bike issue coming down the big triple. Anstie had just got going when he got landed on and was thrown from his machine like a rag doll. The Brit was knocked out and has a broken arm and possible shoulder injuries, but there is also concern about his back and neck which took the full impact of the other machine, Anstie went straight to hospitals for further evaluation.

It was a bitter blow for GB who had been neck and neck with America for second overall today. Britain qualified 12th with Simpson and Wilson’s results but with Anstie out for GB, have no chance of a good result.

It was a bad day too for Pauls Jonas who had just got into fourth and set about joining the front three when he got caught the Anstie incident and ended up DNFing after a further crash.

MX2 world champion Tim Gajser didn’t have it any better. He gated second behind Webb and was all over the American on the opening lap until he crashed at the bottom of the hill. Gajser got back to eleventh but Slovenia now have to go to the B final and any chance Gajser had of running at the front tomorrow is pretty much over.

Team USA had 25th pick but you wouldn’t have known by the starts of Webb (holeshot) and Martin (second out of turn one) and their 2-2 scores gave them second overall. Justin Barcia started about tenth and came through to fourth but only after being passed by an on-form Martin Barr in lap one.

Unfortunately for Barr he crashed later that lap but Ireland still made the A final directly with Barr’s fifteenth and Irwin’s twelfth place finishes. Irwin even survived getting taken out by Pauls Jonass and another fall to get a superb results on an under-powered machine.

Max Nagl rode superbly from a bad start to fifth and was the fastest rider on the track at the end of the MXGP race as he reeled Barcia in for fourth on Saturday only to run out of time. But combined with a brilliant sixth by Ullrich in MX3 gave Germany fourth pick for tomorrow’s motos.

Tomorrow will be a new day and fast as France are you just can’t rule out a very determined American team who
will start superbly and do anything to take this win tomorrow – let’s French are ready for some aggressive racing!