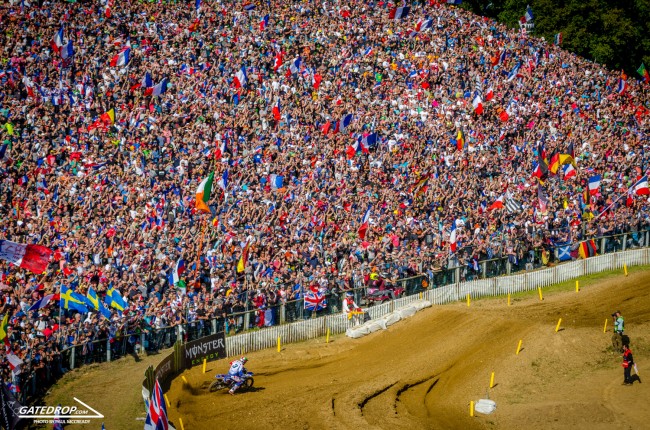 What a day at Ernee! A nail-biting French win in home soil against a superb American team meant it was a day that will go down in folklore in French motocross.

France and USA went into the last moto tied on points but France emerged from an epic finale with a two point win as the USA just couldn’t overcome their first bad starts of the weekend.

An exhausted Webb got straight off the bike, took his helmet off and sat down in the shade behind the starting gate, illustrating just how much effort the MXoN debutant had put in.

But France were imperious under immense pressure in the final moto with Roman Febvre starting top five and coming through the field again for a massive win. Paulin pulled a performance out of bag when he needed to as well. After a crash in race one Paulin did not look on his best form but a fighting fifth and gating ahead of the two Americans proved vital.

Paulin said race three was all about going to war and fighting to the end but admitted once he saw he only needed fifth to win he just rode steady.

Barcia rode a brilliant race to catch and pass Paulin and get into third, his pass on Bobreyshev gave him the overall in his class but it wasn’t enough to take the win for the team. Cooper Webb was brilliant all weekend but his start and a stall gave him too much to do pass Paulin even though he closed the gap in the last two laps.

Team USA were gracious in defeat and neither they nor France could believe the noise of the crowd. All three American riders said they knew exactly when a French rider was near them due to the noise!

The French were understandably overjoyed with their win but Febvre admitted there was a lot of pressure in the third moto and it was harder than race two because he couldn’t pull away from Ben Townley!

Townley maybe had the ride of the day and it was great to see the popular Kiwi put on such a performance but ultimately the day belonged to France who successfully defended their Nations crown in front of an ecstatic home crowd!