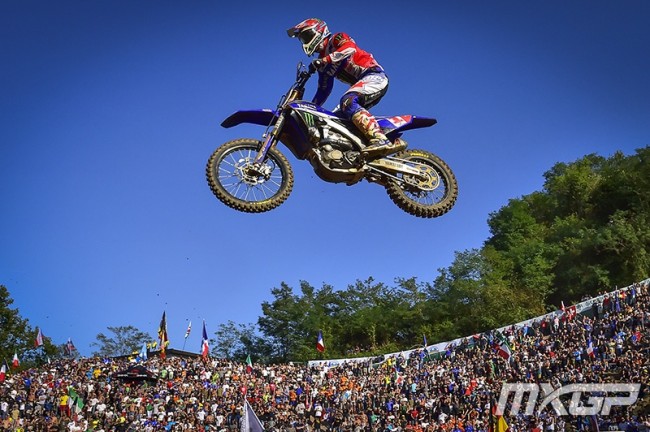 After a simply breathtaking MXON, we look back at some of the most memorable moments.

1. Jason Anderson getting landed on – First of all it’s great news that, aside from a concussion, Anderson was unhurt in the incident because it was awful to watch. From elation to devestation in one second for the American who rode a great race, but why was he rolling a double when he knew riders where coming behind him? I think the elation of the moment meant Anderson forgot the riders coming behind were still racing.

2. Last lap drama – In the B final Ireland sensationally made the mains when Henry Jacobi crashed on the final corner and couldn’t finish the race, after much confusion and disbelief Ireland were finally awarded the victory to get them to the A final yet again. Then, in the final moto of the weekend, more last lap drama led to more confusion and disbelief! The Netherlands thought they had it won until Febvre passed Searle with a few turns to go to unwittingly win the event for France! And a lap before that America were hanging onto victory by their fingertips when Webb sensationally went down. It was simply unbeleiveable and you just couldn’t have made the drama up.

3. Jeffrey Herlings – Herlings apparently didn’t want to race this event because he didn’t feel prepared on the 450. But KTM said you’re racing and it was just as well they did! Herlings was one crash away from winning all three motos and was the fastest rider in the world on the day on his worst surface – hard pack. He beat Cairoli straight up on home turf in that final moto despite racing back to back motos, it was an extememly impressive performance with only a few days on the bike. Herlings has vowed he will only get better from here, the rest of the boys in MXGP are going to have to do some serious work this winter to stay with him week-in, week-out on this evidence. But with Gajser not racing, there is still a bit of the unknown as the two 2016 world champs prepare to face-off in 2017.

4. American pride – You have to hand it to the Americans, they had a horrible day on Saturday but still very nearly won the event, despite none of their riders being the fastest in their classes. The heart and determination these guys have riding for their country is something else, they just never give up and seem to raise their game. Even Jason Thomas said Anderson’s ride in the second moto was his best since his win in A1, you just know US pride elevated Anderson back to that level. Webb, surprisingly, wasn’t on the level of Cairoli, Febvre, Herlings or even a superb Strijbos, but that didn’t stop him giving everything he had and his emotions at the end of the event showed just how much it meant, even if he had no reason to feel guilty about the crash. Yes they have the advantage of a huge country to choose riders from and really should win every year, but their determination and national pride, win or lose, is just superb to watch.

5. The pressure -Cooper Webb was under huge pressure in that final moto, he had Febvre right on him and couldn’t let him by in case Febvre got Webb and Searle and won the event for France, unfortunately Webb crashed but he wasn’t the only one under pressure. Herlings arguably had more pressure, unlike Webb who just needed top five, Herlings basically had to win both motos to give Holland a chance and even he crashed in the first one (with Bogers crashing in his first moto too) those points lost proved crucial. Cairoli too had all the pressure on him to get Italy in the top five and his 2-2 scores did the job. For France, Febvre and Paulin blew the starts and Febvre single-handedly came from outside the top ten to fourth to win the event for France in that final moto, it was a display of superb mental strength and determination under huge pressure. Both Holland and USA almost got the job done, but mistakes ultimately cost them and it was Febvre who ultimately delivered the victory for France. That’s why this event is fascinating to watch, to see how some of the world’s best deal with the pressure of going for the race win or the team win.

6. The atmosphere – There is nothing like the MXON for atmosphere, but this year was epic, with the superb track, the nostalgia of 1986, the home crowd on for Cairoli, Herlings on the 450 and the drama of the event, it was just sensational. A perfect mixture culminating in one of if not the best MXON in history.

7. Belgian speed – Oh what could have been for Belgium. Kevin Strijbos was superb and Stefan Everts must be wondering why he can’t perform like that every week, the man who finished eleventh in MXGP caught passed and left America’s 250 National champ and team leader for the USA, Cooper Webb. It also shows the depth in MXGP when that can happen! Jeremy Van Horebeek was also brilliant, his speed and aggression was something else on that 250, and if he can ride the 450 with that confidence Van Horebeek could step up a level next season. With Desalle there, Belgium could well have won quite easily, but would Steve Ramon not have been a better choice for the 450 replacement than MX2 specialist Brent Van Doninck? It’s if and buts at this point, but Strijbos and Van Horebeek were undoubtedly very impressive this weekend, a bit like America the Belgians seem to be able to up their game at this event.