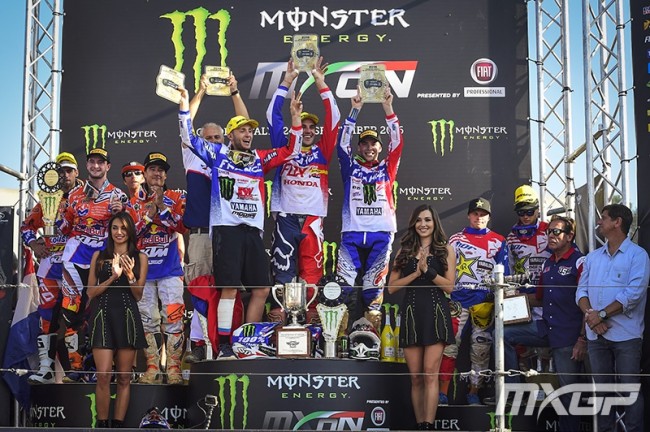 The US media and riders continue to complain about the timing of the MXON and believe that it’s an agenda against the USA.

“This event keeps getting pushed further and further back to basically screw team USA a little bit, so if I’m USA I say we aren’t going until you help us out. You have to move this race up (in the schedule to suit USA).” said Steve Matthes, Racer X and Pulp MX journalist.

That view on the MXON is now unfortunately precipitating into the US riders’ conscience. Cooper Webb, a fan of MXGP, has uttered similar thoughts in his latest Racer X interview saying: “It’s one of those things that I think they [event organizers] need to understand and maybe respect our series a little bit more. In my opinion, they really haven’t made it the easiest for the U.S. with their schedule and our schedule. “

But we looked back at the last 23 years and discovered that the date of the race has largely remained as it always was – around the last two weekends of September! There is no trend at all of the race being pushed back in the modern era.

Indeed, the US team even raced the Italian MXON in 2009 at the beginning of October – and won. It appears despite being able to win the race up to 2011 on similar end of September dates, it has now suddenly become an excuse for everyone including the media to jump on, since their losing streak began.

Interestingly, the three times in the mid-90s the MXDN was in the first two weeks of September Team USA lost anyway and in 1995, their number one rider, AMA 250 motocross champ Jeremy McGrath, did not race the event.

The truth is that while it is a tough time for the US riders to do the race, it’s the AMA changing their dates and the poor timing of the MEC that is getting in the way, not the FIM schedule or an agenda against the USA as being falsely portrayed by the Americans.

Yet again the world is expected to change for three American riders, but the reality is, where there is a will there is a way, and it seems the will is not there in the USA to accommodate the MXON after recent results, combined with the fact that supercross is now so much more important than outdoor racing in that country.

But maybe the attitude will start to change if they win this year!?