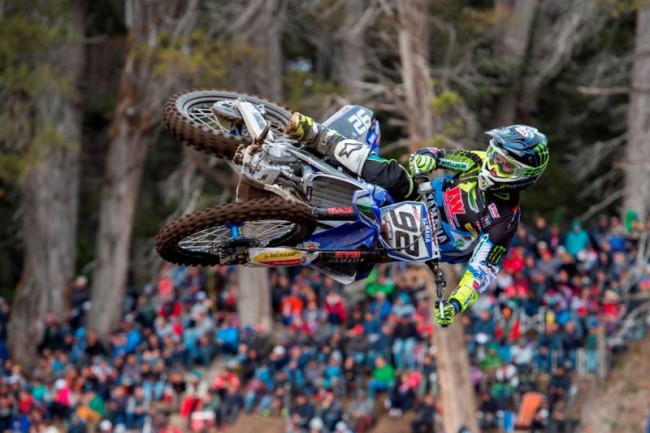 Tim Gajser: It’s not the fact Gajser is winning that’s impressive, it’s the way he’s doing it. Gajser was always going to win races this year but it’s his consistency and calmness during the motos that’s the most impressive. So far he is riding like a seasoned veteran.

In race one in Argentina didn’t have the pace to win but worked his way from sixth up to second and then dropped to third accepting his result and not pushing beyond his limit. Then in race two he took the lead and cruised out front, again doing what he had to do and no more. Gajser so far is riding with the head of 29 year old not a 19 year old, and that is his most impressive aspect of his success so far.

Valentin Guillod: Less than twelve months ago Valentin Guillod was taking it to Jeffrey Herlings at the British GP beating the Dutchman straight up in a superb performance. But his first few 450 appearances have not exactly been impressive especially in contrast to Tim Gasjer’s seamless move to the bigger machine.

Guillod has been a shadow of the rider he was in MX2 but in Argentina the Swiss man showed there could well be some light at the end of the tunnel. Guillod grabbed an eighth place in the second moto with a medicorce start and showed a real glimpse of what he could do on a 450.

Guillod said: “The second race was really positive for us, because I fought really hard and the work we did from Saturday on the engine to improve the bike we could see.” Guillod also mentioned he is looking forward to Mexico and getting back on the hard pack now he feels more comfortable on the machine. Hopefully Argentina was the breakthrough ride and Guillod will now have the confidence to perform to his potential and get amongst the top five.

Christophe Charlier: The man with the most untapped potential in MXGP might Christophe Charlier. The Frenchamn got a slightly fortuitous ride with the factory Rockstar Husqvarna team this year but injuries from the off-season have prevented Charlier from showing his true potential. However in Argentina Charlier showed some good top ten speed and got his first top ten over the year in the second moto.

Charlier said: “We made another step in the right direction today. Physically I was feeling a bit closer to where I want to be and the pain from my injuries was almost non existent.”

Like Guillod, Charlier excels on hard pack and has won races in MX2, it looks like the Frenchman is now starting to get the ball rolling on the Husky and should only get stronger from here.

Max Nagl took his first moto win of the season and did it in style. Pic: Youthstream

Max Nagl: Ever since his unfortunate leg break while leading the championship last season we haven’t seen the real Max Nagl. But the first moto in Argentina was Max back to his best. A good start and a perfectly controlled moto saw Max be the first rider other than Gajser or Febvre to take a moto win this season. Nagl looked much more comfortable and was more aggressive than previous round and clearly progress with the bike has given Max the feeling he needs to be a contender.

Nagl said: “Overall, it was a very good weekend for me. I had a really good first heat. I got a great start and managed to pass Tony pretty soon after the first few corners. I was feeling good so I tried to remain focused on my own race and it paid off. I built a gap of about seven seconds, which allowed me to race to the win. Everything was fine and my riding was really good.”

Admitting he didn’t quite have the rhythm he needed in race two, Max remained positive with his overall progress and is hopeful for another podium in Mexico this weekend.