MXGP to heat up in Thailand! 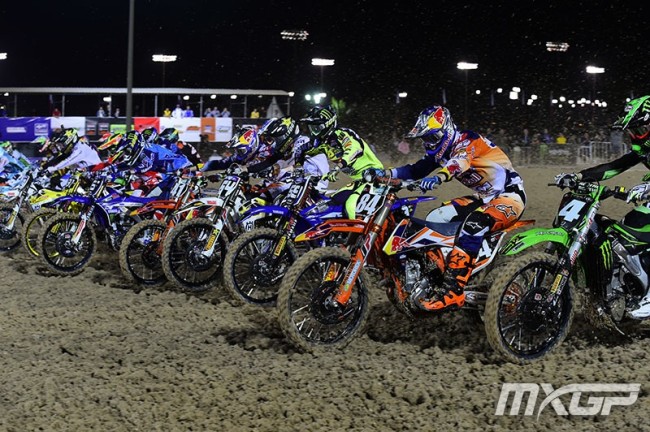 SUPHAN BURI (Thailand), 2 March 2016 – It’s all new, it’s in central Thailand, and it will play host to the second round of the FIM Motocross World Championship this weekend. A new motocross track has been built in Suphan Buri, a province of Thailand located a couple of hours North West of Bangkok, the countries capital. It will be the first time this year that the riders of the MXGP and MX2 world championships are on a 100% level playing field with the track being made specifically for this event. In terms of what to expect from the track, the track staff have said it is in complete contrast to the jumpy circuit we had at the MXGP of Thailand last year. Instead it is an intermediate to hard-ish soil that has been well ripped with less jumps and a quicker and more flowing layout.

While a new track on its own is a big challenge, not just for the riders but for the teams as well as they will be searching all weekend to find a good bike set up and pick good tires, the biggest challenge is probably going to be the heat with the forecast predicting temperatures that will burst the thermometer at 38 – 40 degrees Celsius.

The first few rounds of the championship are always crazy; nerves, hype and expectation are a few things that often affect the riders while the mechanics and team staff are often revising set-ups and trying to settle back into the race environment. One rider who caught everyone by surprise last weekend at the opening round of the championship in Qatar was Honda Gariboldi’s Tim Gajser. Gajser, who is last years FIM MX2 World Champion, was oozing confidence in Losail and it reflected in the way he raced. The new rookie sensation got off to two good starts and threw down consistently fast laps to dominate the premier class on his debut. The nineteen year old has struggled with the heat of Thailand in the past, so this weekend will be a massive test.

The defending MXGP world champion, Monster Energy Yamaha Factory Racing’s Romain Febvre has always done well here. Over the last three years he has landed on the podium twice in MX2 and just missed it here in the MXGP class last year. Judging by those statistics alone, and the fact he has amazing mental strength will make him a solid bet for the overall.

It’s cold in Russia right now, so this heat is a major challenge for Team HRC’s Evgeny Bobryshev who is looking stronger than ever at the moment. The long time Honda rider doesn’t have the best memories from racing over here, but a winter of solid training and a great start in Qatar could be enough to make a difference in his results.

Thailand was the catalyst of Monster Energy Yamaha Factory Racing rider Jeremy Van Horebeek’s podium streak in 2014. The Belgian in blue took his first ever premier class podium in the heat of Si Racha, Thailand back in 2014 and then strung together a further run of ten consecutive podiums thereafter. Ideally, he would love to play that record again, so let’s see if he can throw it on.

As for the eight-time world champ, Red Bull KTM Factory Racing’s Antonio Cairoli is normally a force in this corner of the globe having never finished off of the podium. The Italian legend has topped the box twice and is arguably one of the fittest riders in the class. He hasn’t made a podium appearance in the last eleven rounds of the FIM Motocross World Championship with his most recent being a third place at the MXGP of France last year. This weekend the soaring heat could play in his favor and see him finally turn that ship around.

Asian turf has always been good to MX2’s dominating force Red Bull KTM Factory Racing’s Jeffrey Herlings who has never been challenged nor beaten out here. After getting the monkey off his back at the MXGP of Qatar where Team Monster Energy Kawasaki’s Dylan Ferrandis was the only rider to match his speed for an entire race, the Dutchman is more than likely only going to pick up more momentum out here.

As for Ferrandis, the Frenchman admitted his pre-season set-up wasn’t perfect and there was still a bit of work to do to get his bike to where he needs it to be. The talented number ‘4’ returned to Europe after Qatar where he will get in another couple of days of riding and testing in the hope of returning with a better set-up where he can throw a spanner in the works for The Bullet, Herlings.

Red Bull KTM Factory Racing’s Pauls Jonass was one of the biggest surprises of 2015 after struggling in the year prior to even crack the top ten and then showing up last year as a solid title contender. The Latvian hit a career milestone here in Thailand last year when he landed on the podium for the first time.

Meanwhile Team Suzuki World MX2’s Jeremy Seewer has had a solid winter training with the highly acclaimed Everts duo, the ten-time world champ, Stefan and his father, four-time world champ, Harry. Stefan and Harry both played a huge part in the turn around of Pauls Jonass and are now pegged to do the same with Seewer. The heat of Thailand took its toll on the Swiss rider last year, so hopefully he’s drinking like a fish and is as prepared as he can be to challenge for the podium this weekend.

Culture shock is the term that springs to mind when thinking of the kid who is currently fifth in the MX2 championship standings Kemea Yamaha Official MX Team’s Brent Van Doninck. It will be Van Doninck’s first ever time racing in this part of Asia and it will definitely be a test of physical and mental strength. How he performs now after a solid start to his 2016 MX2 campaign will be interesting.