MXGP: Things we learned from the Latvian triple header 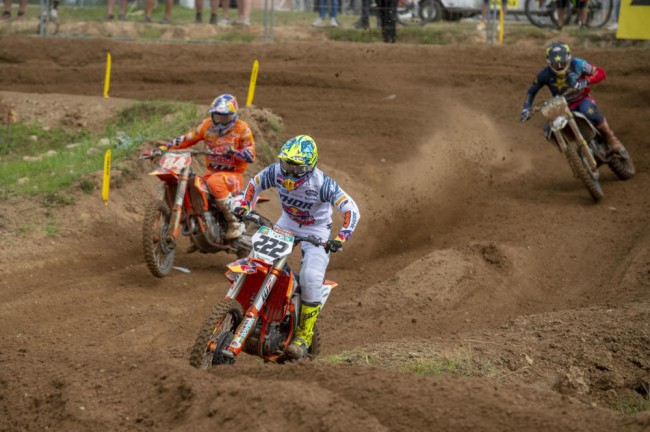 The MXGP World Championship finally made a return earlier this month with a triple header in Kegums, Latvia – something we’ve never seen happen before. With three GP’s taking place within a week it brought up some surprises and totally different results despite the racing taking place at the same track. It just goes to show how competitive MXGP really is at the moment.

There was a different winner at each of the Grand Prix’s – Glenn Coldenhoff, Antonio Cairoli and Jeffrey Herlings. There were eight different podium finishers out of a possible nine (Herlings was the only rider to get two podiums from three GP’s). Alongside Coldenhoff and Cairoli who won GP’s – Gajser, Febvre, Seewer, Jasikonis and Prado also made trips to the podium’s during the three rounds.

It just goes to show how important starts are at the moment in MXGP, with a good start there’s a number of riders who feel they have what it takes to win. The likes of Seewer, Febvre and Jasikonis will probably feel hard done by not to win one of the GP’s in Latvia as they certainly had the speed so they’ll be happy with their riding heading into the next triple GP at Faenza. 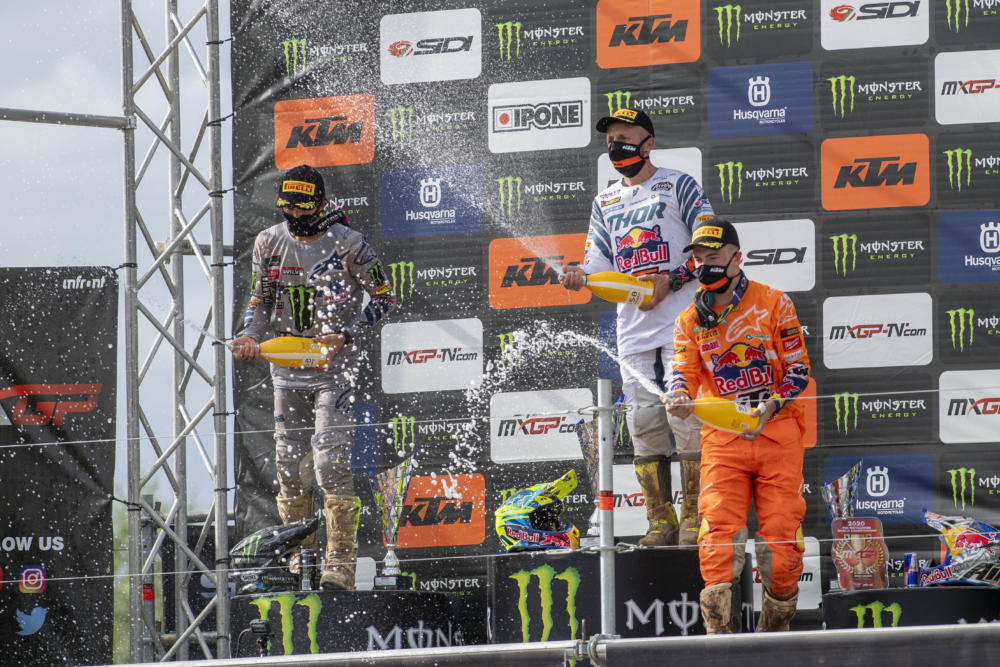 Lots of riders have the potential of standing on the podium in MXGP this year.. Pic: Shot by Bavo

The next venue on the MXGP calendar is Italian hard pack track at Faenza and it’s literally the polar opposite of Kegums. Having watched the opening round of the Italian championship, the track was proper slick and hard pack with not much grip for the riders. It’ll be interesting to see how the MXGP track crew prepare the track – hopefully it’ll be similar as it’ll be cool to see how the riders adapt to such an old school track.

The likes of Jeremy Seewer and Romain Febvre are all rounders so should be right at the front at Faenza but it’ll be interesting to see how Arminas Jasikonis performs as he’s certainly much stronger in the sand. If the Lithuanian can show the same sort of speed at the hard pack tracks he really might be the real deal – he’ll be looking to hold onto his third place in the championship standings. At Latvia, Jasikonis picked 110 championship points, only Herlings picked up more so it shows how well those three rounds went for the Rockstar Husqvarna man.

The battle between Tim Gajser and Jeffrey Herlings should be a fascinating one at Faenza. Gajser, the MXGP World Champ is still chasing his first MXGP overall win this year – that’s how competitive it’s been! The track is right up Gajser’s street and might be Herlings worse track on the calendar so it could be a good chance for Gajser to narrow down that 46 points gap but never rule out Herlings! It’ll also be interesting to see how Cairoli performs as you’d think it’s a track he won’t particularly enjoy but the 9 times world champ can’t be under estimated. 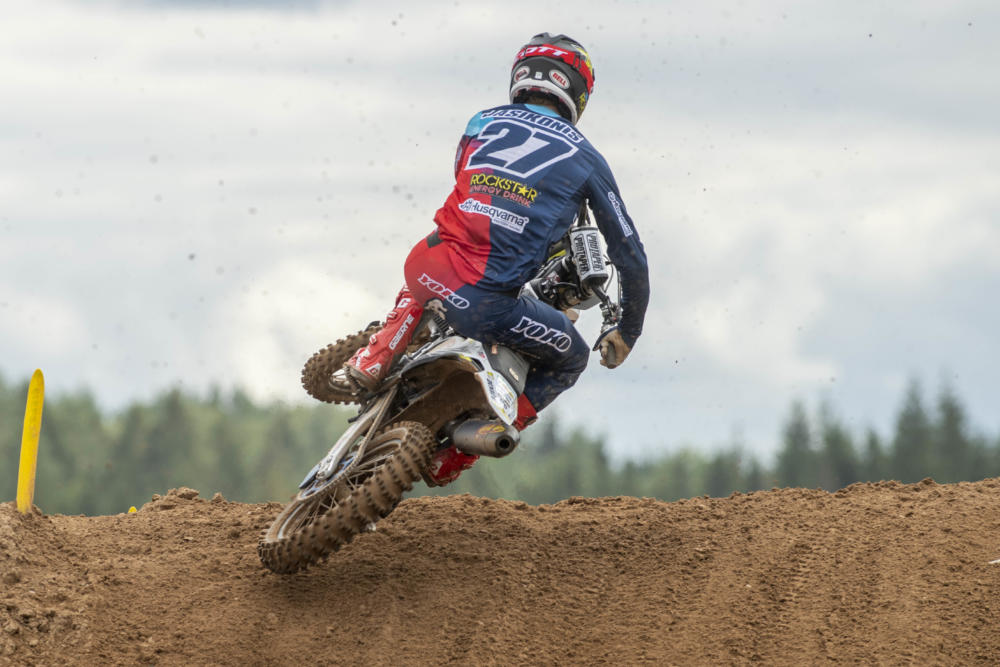 What can Jasikonis do on the hard pack tracks? Pic: Shot by Bavo

What an incredible career Antonio Cairoli has had, there’s no doubt he goes into the history books as one of the best Motocross riders ever. The longevity of his career has also been impressive – at 34 years old he’s still winning and won his 90th Grand Prix in Latvia. Cairoli won his first GP in 2004 and has won at least one GP every year since, it truly is remarkable in such a tough and demanding sport.

The level of MXGP this year in insane and Cairoli looks as good as ever running right at the front and even with bad starts is battling through a deep field. It’s clear to see Cairoli is still motivated and wants to show the younger riders there’s plenty of life in him yet. 2020 won’t be the end either as he recently signed a KTM contract extension to race in 2021 so we can look forward to plenty more impressive races and battles from Cairoli. 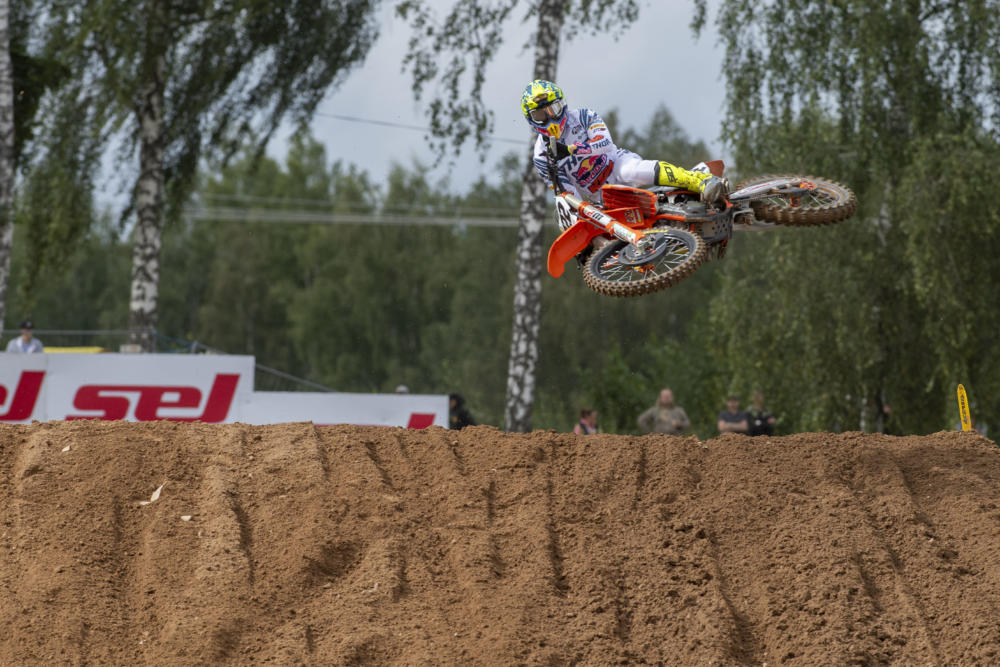 Cairoli turns on the style Pic: Shot by Bavo

Over the years we’ve all been blown away by just how fast Jeffrey Herlings is, at times it’s ridiculous – winning moto’s by a minute or over. It’s worth noting that Herlings wasn’t as prepared as he’d have liked to be for Kegums due to lack of bike time after concussion leading up to the event. Despite this, Herlings still walked away with the most points out of everyone in MXGP at Kegums despite bad starts. Even though he always wants to win, he can be happy with how the triple event went for him as he picked up 119 vital championship points and now has a 46 points gap – things are looking good in that regard.

However, we’ve been so used to Herlings just pulling the pin and dominating races in the past, are those days now over? The competition have certainly raised their game and along with Herlings new approach to racing thinking about the championship and the bigger picture, it might just lead to more exciting battles in MXGP than what we’ve seen in the past, something the fans certainly want to see. Having said that, if Herlings gets holeshots, it’s still possible he’ll clear off at the front of the pack. Let’s not forget about MXGP rookie, Jorge Prado who will be looking to mount a serious title challenge in 2021 and with the talent he has you’d be silly to rule him out of contention.

“If someone is ‘there’ – like Jeffrey in the past or Tim Gajser – then we are watching, we are not sleeping! We are analysing videos, we check the riders for what they are doing differently and we try to adapt and catch-up. That’s how it goes and that’s why the level increases and increases”, Jeremy Seewer stated. It’s a valid point made by the Swiss rider and it looks like a number of riders have certainly stepped up their games for the 2020 season. 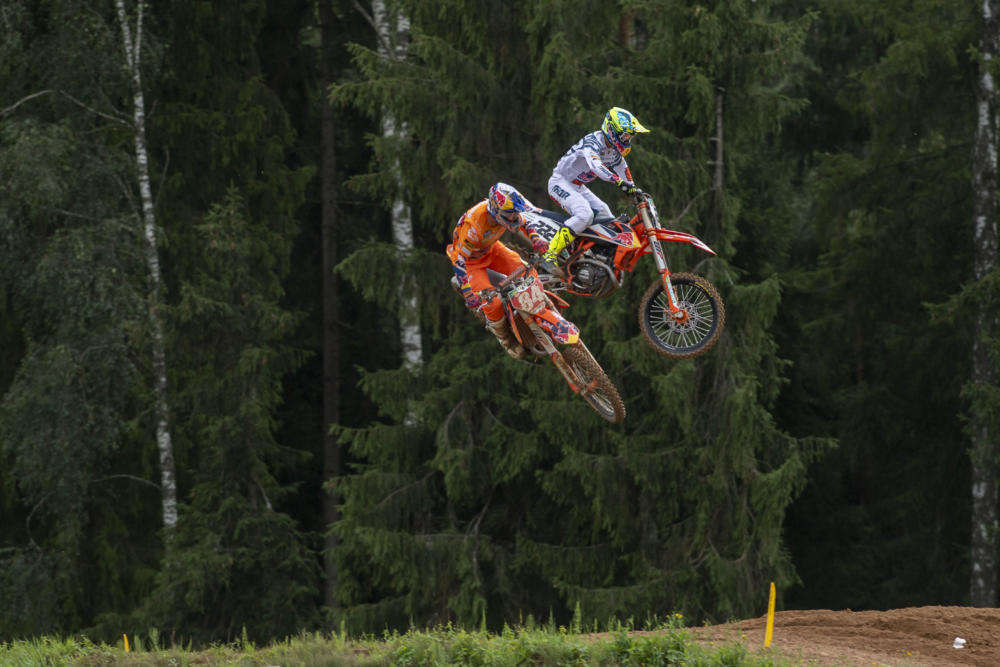 Herlings and Cairoli locked in a battle – 13 world titles between the pair! Pic: Shot by Bavo

In the past, it would be fair to say that the MX2 championship battles haven’t been the most exciting with the likes of Herlings, Jonass and Prado dominating in recent years but it looks like that’s all about to change this year. You would say that the Kegums track would have suited Jago Geerts more than Tom Vialle so the French talent will be happy to come out of the triple header with three more points than his title rival. Over the six moto’s, Geerts picked up 127 championship points with Vialle picking up 130 – only eight points separate them in the championship battle with the Factory KTM man keeping hold of his red plate.

Heading into the triple GP at Faenza, a completely different track, it’ll be interesting to see what happens in MX2 at those rounds. You’d have to say the track suits Vialle more but Geerts has showed in the past that he’s no slouch in hard pack – the Belgian just needs to cut out the silly crashes, if he didn’t crash as much he’d probably have the red plate now. It’ll be interesting to see if the likes of Van de Moosdijk or Boisrame have what it takes to win or get in between Geerts or Vialle. 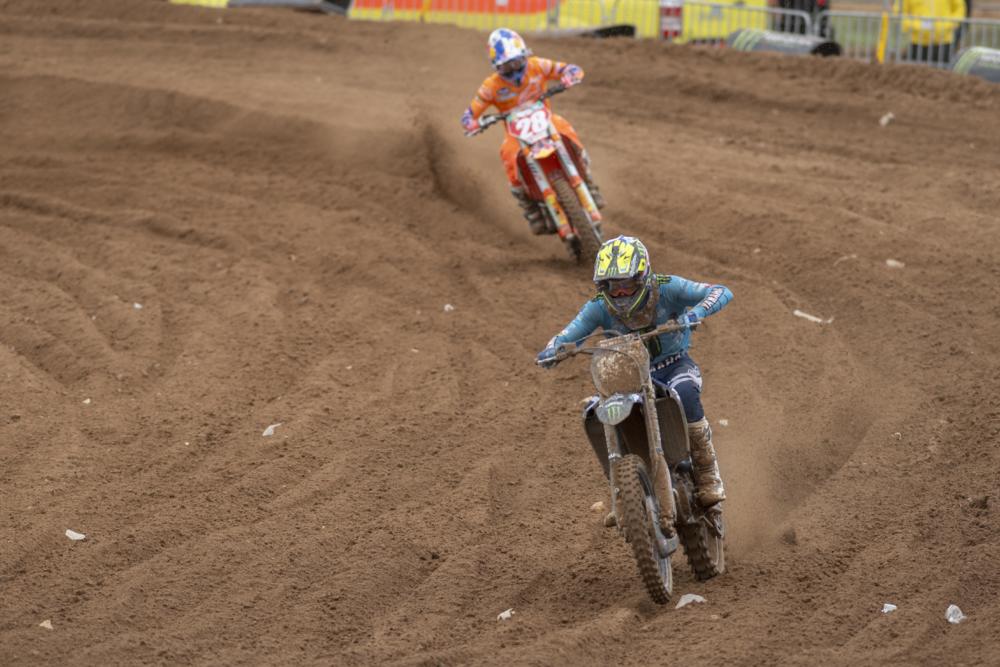 We can look forward to plenty more battles between these two! Pic: Shot by Bavo

Due to the crazy world we are living in, Infront Moto Racing have went down the path of holding triple events and one day formats and under these circumstances, it’s hard to criticise these decisions. The good thing about Kegums was that after the European action, they only fixed the jump faces and dangerous areas on the track which meant the GP riders had a rough track for qualifying and beyond. This is absolutely the right approach and let’s hope it continues at the other triple events which are scheduled at Faenza, Mantova, Lommel and Arco di Trento.

Hopefully things can go back to normal in 2021 with the normal format, with no midweek GP’s, there would be no reason for them not to revert back to the two day format, fans want to see the best riders in the world as much as possible and if it’s only a one day format less spectators will attend Saturday’s.