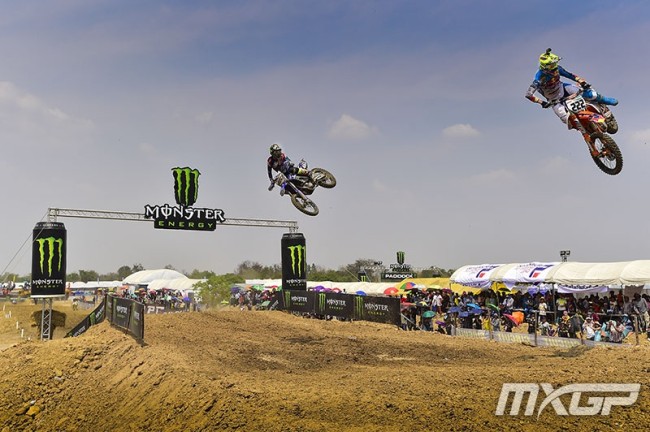 Going into round eight in Arco di Trento there are a number of heated rivalries bubbling over in MXGP as the season reaches the critical mid-point where riders expect to produce their best form.

Here are a few to keep an eye on this weekend:

1. Herlings v Seewer (and Everts) – The well documented rivalry between Seewer and Herlings could get interesting in Arco. Seewer is an expert on the hard-pack tracks and Herlings’ comments won’t have intimidated Seewer or Everts, in fact, it will probably fuel the fire and Everts will know Herlings’ weaknesses.

2. Herlings v Ferrandis – The Frenchman cut across Herlings so hard out of the gate in Germany the Dutchman nearly went down! Added to the first round in Qatar when Ferrandis ran into the side of Herlings, these two aren’t exactly friends and, of all the riders, Ferrandis probably has the least respect for Herlings. Again a hard-pack specialist, Ferrandis will only get stronger after his shoulder injury and isn’t afraid to get physical to beat the Dutchman!

3. Febvre v Gajser – It has been a frustrating few weeks for Romain Febvre who has seen rival Tim Gajser steal the headlines. In Germnay Febvre caught Gajser in the heat and race hit him pretty hard in the corner only for Gajser to cut the Frenchman off on the drop-off, as if to say, “don’t ever do that to me again.” Up until now the Gajser/Febvre rivalry has been pretty clean but that moment showed that both will not back down in a fight and they both now each other is their main rival right now – and it’s Gajser who has the red plate in Germany!

4. Febvre v Cairoli – It hasn’t been the friendliest rivalry this year with Febvre determined to do whatever it takes to beat Cairoli to prove he deserved the 2015 title, but Cairoli is doing whatever it takes to keep Febvre behind his including cutting across his lines! They have already came together this year and with Cairoli winning his first GP in Germany and gunning for a win at his home GP this weekend on a track that suits Febvre, it could get very interesting!

5. Febvre v Van Horebeek – It might be time to get the wall up in the Yamaha pits! Van Horebeek and Febvre plus their mechanics, were not happy with each other in Germany and when they came together in Germany in moto one it took the animosity to another level. Van Horebeek was the man for Yamaha in 2014 but Febvre has pushed him aside and is now the main man in the team, Van Horebeek can’t be happy with that and Febvre will think JVH should pipe down and know his place. Both riders love the hard-pack and JVH has a point to prove to Febvre and Yamaha that he can win and be a contender if he wants to keep his job in the team next season.