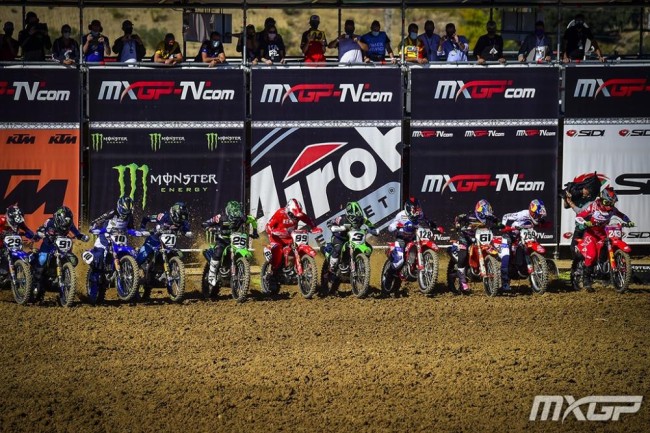 The MXGP World Championship has been incredibly strong for a number years and is always deep full of talent but the racing in 2020 has been pretty special.

Everyone knows by now just how fast the speed is at the front of MXGP but the crazy thing about 2020 is that there’s been seven different overall winners in twelve rounds of the series – so many guys can win and it’s great to watch. This season has been tough to predict when it comes to who’s going to win and getting good starts have never been so important in this class.

The season got underway at Matterley Basin and Valkenswaard a week later in March. Two completely different tracks but both of them offered a challenge to the riders. Jeffrey Herlings won them both but Tim Gajser didn’t make it easy for the Dutchman and if you had to go by the first two rounds it looked like those two could be the main men whenever it came to winning. 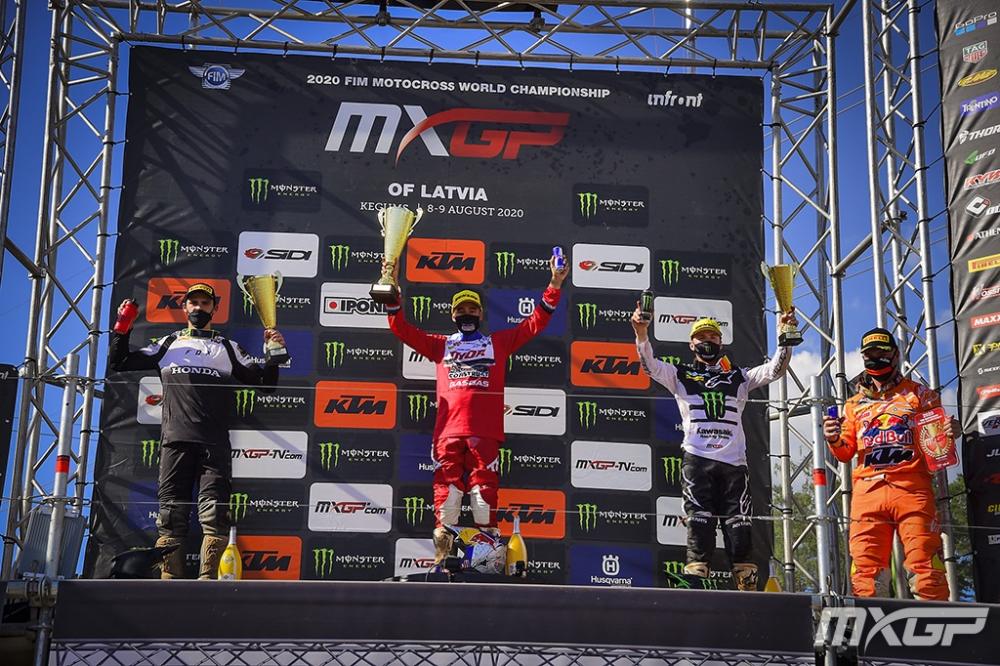 After a couple of weeks break, it was time to head to Faenza, a slick hard pack track and a completely different track to Kegums. Looking at the Faenza track you’d have put good money on Gajser winning one or two but he had to wait as there were a different winner at each of the events once again. Herlings, Prado and Cairoli all won in Faenza but the big news from that event was Herlings unfortunate injury ruling him out for the season.

Young Spanish sensation, Jorge Prado winning a GP overall before Gajser, who’d have thought that at the start of the season? Also, the recently turned 35-year-old Antonio Cairoli continued to show he has plenty of life in him yet! 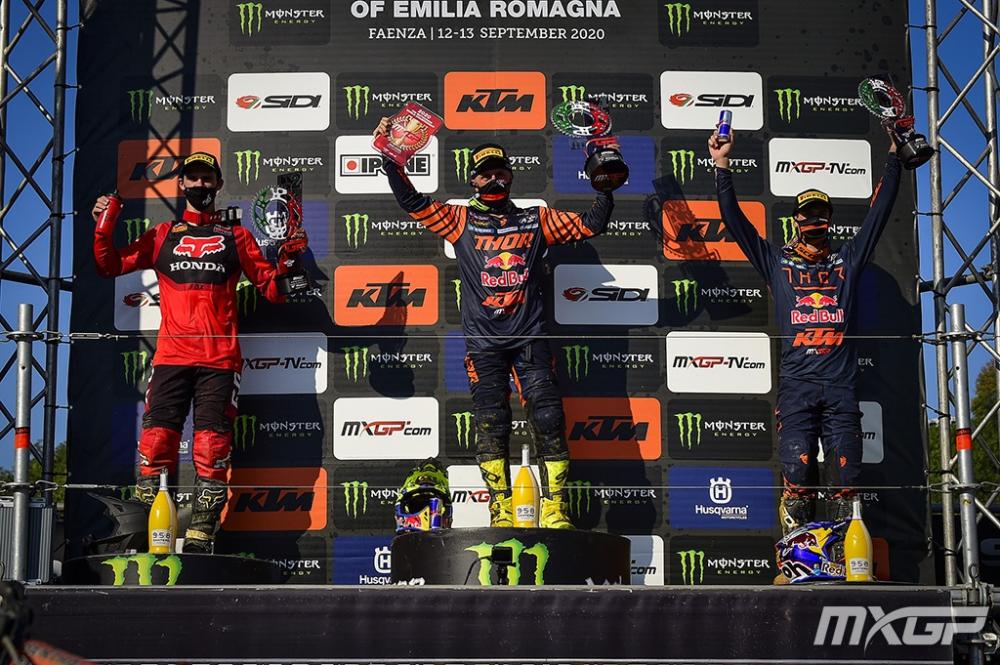 Mouth-watering talent on the podium with Cairoli on top! Pic: Infront Moto Racing

The series stayed in Italy for the next three rounds taking place at the sandy Mantova. You guessed it – each of the events at Mantova had a different winner as well and this time in the form of Seewer, Febvre and Gajser. It’s a shame Febvre missed the first two rounds of the series or he’d be in championship contention!

At Mantova, the MXGP world champ, Gajser became the seventh different winner in 2020 in what really has been a fantastic season so far. There’s actually been eight different race winners in 2020 with Arminas Jasikonis winning a moto in Latvia but a big crash in Mantova ended his season so a quick shout out to him. We look forward to seeing him back in 2021, after what he’s been through hopefully he can get that overall victory – he was the only rider so far this year to win a MXGP moto to not win an overall! 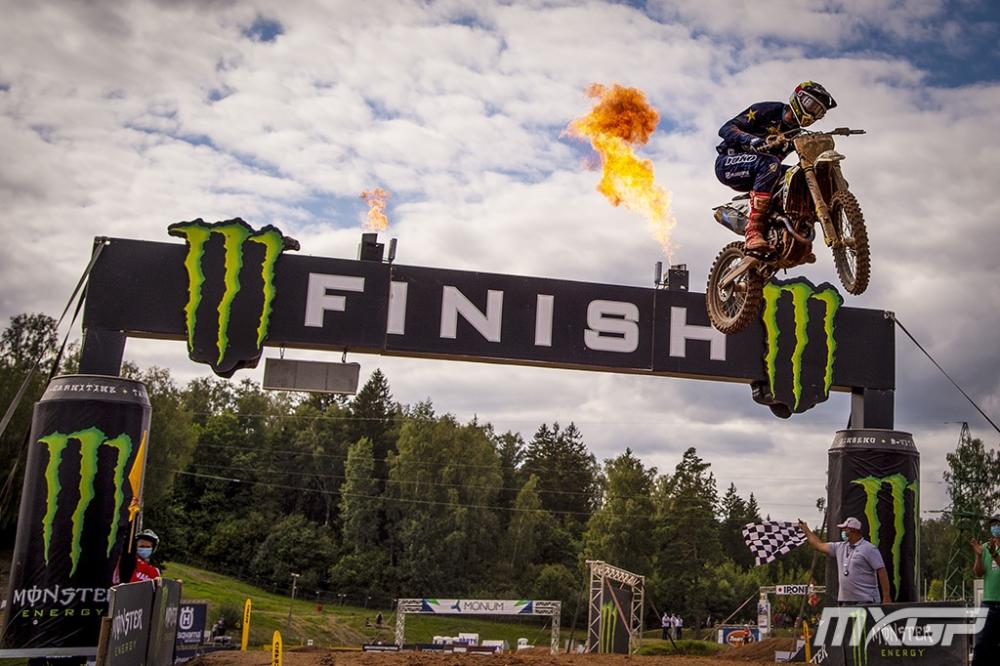 In Spain at the weekend, Jorge Prado showed the world his technical ability going 1-1 at his home MXGP to win his second overall in the the MXGP class and now has 33 GP wins to his name – the tenth most successful GP rider and he’s only 19 years old.

The series now heads to Lommel for another triple header, surely there can’t be three different winners at this event too? In terms of the championship, Tim Gajser has a 24 points gap over Antonio Cairoli but at Lommel anything can happen and it’s going to be important to not many a costly mistake. 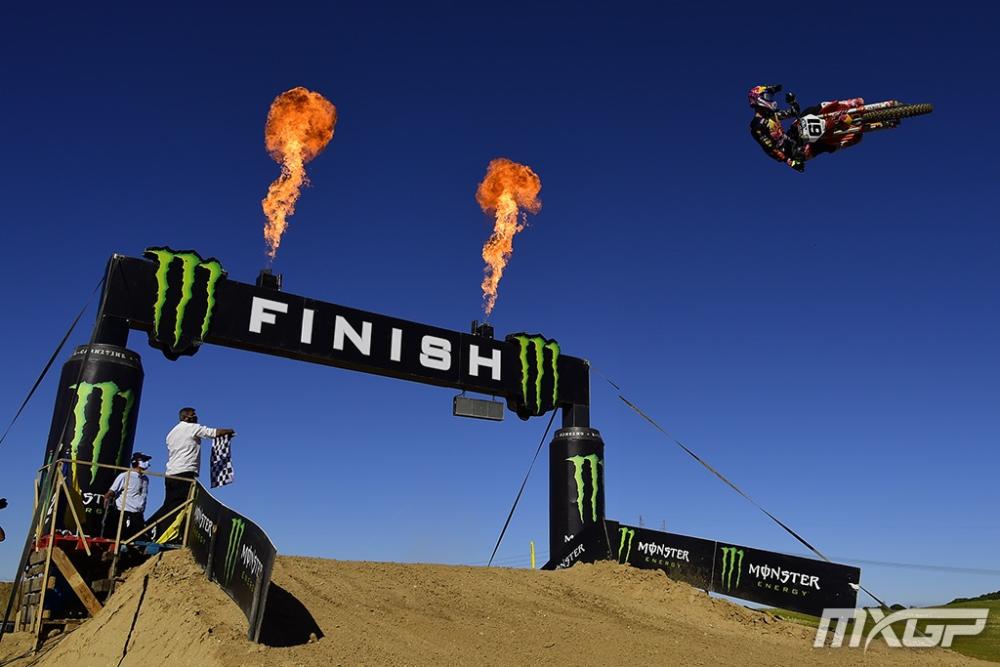 Prado is getting stronger and stronger in the MXGP class! Pic: Infront Moto Racing

Cairoli, Prado and Coldenhoff on paper are the most comfortable in the sand so don’t be surprised to see them right at the front. For Gajser, it’ll be about trying to come out of the Lommel triple header with the red plate, if he does that with three rounds remaining at Arco di Trento, a track he loves, then you have to put your money on the Slovenian to clinch his third MXGP World title to add to his MX2 title.

No doubt there will be plenty of twists and turns left in the championship battle yet but it’s set to be an epic end to the season!