MXGP: Rumours from around the paddock! 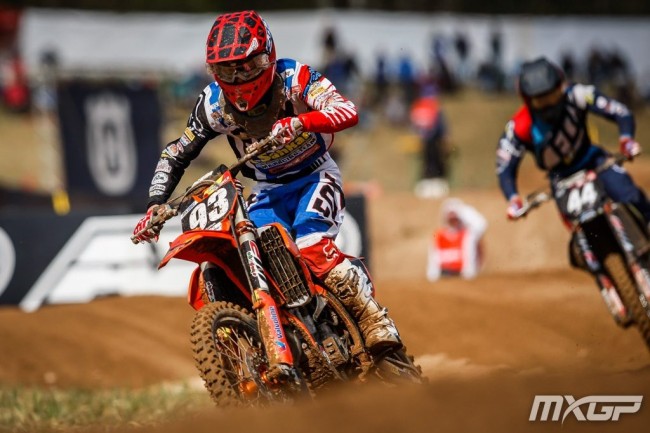 Usually at this time of the year things are in full motion in terms of silly season and who will go where for the following season. However, this year things are pretty quiet and that’s down to the fact that most of the top MXGP riders have contracts for next year.

We attended the recent MXGP at Ottobiano and we did hear some rumours going around the paddock. Let’s start with the MX2 riders that will move up to the MXGP series for 2018.  It’s common knowledge that Jeremy Seewer will stay with Suzuki for next year in the MXGP class and Everts confirmed to us that Arminas Jasikonis will partner him too. Kevin Strijbos won’t be with Suzuki so he is looking a new team for 2018.

Julien Lieber is another rider that moves up to the premier class next year and from speaking to him at Ottobiano it doesn’t sound like he will run with his own setup in that class, has he something in the works? It remains to be seen.

Benoit Paturel and Petar Petrov are two other riders that move up to MXGP in 2018 but we aren’t yet sure where they will move too. Paturel could stay at Yamaha but has also been linked with a move to the Factory Kawasaki racing team. With Petrov being out for the rest of the season he might struggle getting a ride.

In terms of deals that expire at the end of this year they include Clement Desalle, Jordi Tixier, Max Nagl, Tommy Searle, Jeremy Van Horebeek, Valentin Guillod and Glenn Coldenhoff. So, some of these riders might be looking to switch teams for 2018 but they could also sign new deals with their current teams. Coldenhoff and Desalle are both expected to stay with their current teams.

It’s been recently confirmed that Arnaud Tonus has signed a two year extension at Wilvo Yamaha where he will partner Shaun Simpson again so that team is unchanged for 2018.

There have been more rumours about Tim Gajser heading to USA for 2018 but we will have more news on that soon so stay tuned on that one.

Graeme Irwin was walking around the MXGP paddock in Italy and was also at the German round earlier in the year. Let’s just say he’s been spotted in a few of the team’s awnings! We are pretty sure he will compete in the MXGP World Championship in 2018.

In the MX2 class, the Kemea Yamaha squad need to replace Benoit Paturel as he moves to MXGP. Rumours are that they have secured the signing of the one of the hottest properties in the paddock – Jago Geerts who is a rookie in the EMX250 class this year. The move makes some degree of sense with it being a Belgian team, Geerts who is working with Steve Ramon would also be under the watchful eye of Marnicq Bervoets, which could be a deadly combination.

The HRC Honda squad have been linked with Brian Hsu as well so don’t be surprised to see that happening.

Over at Suzuki, Everts has confirmed the team will run two in the MX2 World Championship with Hunter Lawrence one of them. Rumours are that Bas Vaessen won’t be there next year so that leaves the door open to a new signing.

Thomas Kjer-Olsen and Thomas Covington have their future sorted as they have signed Husqvarna contract extensions. It remains to be seen if Conrad Mewse will stick around there next year too.

Jett Lawrence is racing an 85cc this year but he could be set to make a big jump to the EMX250 class next year, stay tuned for that one.  If this does happen it could also put Pichon’s future at Suzuki in doubt.

Over at F&H Kawasaki, David Herbreteau has a contract with the team for next year and Ruben Fernandez will make the move up from the EMX250 class to partner him.

In the EMX250 class, one thing that seems pretty certain is that despite his recent good form, Tristan Charboneau won’t be with the BUD Kawasaki squad next year. It remains to be seen if he will pick up another ride in the GP paddock or if he will head back to America.

Gianluca Facchetti is expected to move up to the EMX250 class next year with his current team, the Maddii Husqvarna squad as they are a team that will build for the future.

We will continue to keep you updated as we hear more news from the MXGP paddock.