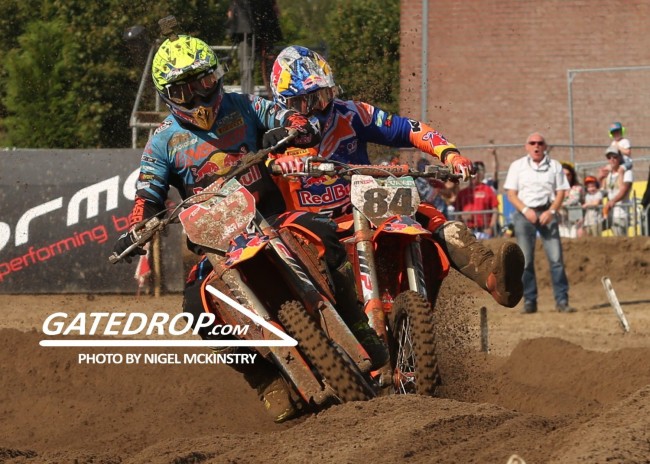 On a much flatter track compared to the qualifying moto, to no surprise Eli Tomac was much better in those conditions. He took the holeshot whilst Antonio Cairoli and Jeffrey Herlings were battling for tenth on the first lap!

It was on the first lap the damage was done and Eli Tomac walked away with an impressive win. Jeffrey Herlings and Antonio Cairoli battled through the pack to get back to second and third respectively. Unfortunately, Herlings had more trouble getting through the pack in the deep MXGP field compared to a week ago when he contested the AMA National at Ironman.

Tim Gajser showed decent speed to come home in fourth ahead of the ICE ONE Husqvarna’s of Max Nagl and Max Anstie.

Hopefully Herlings, Cairoli and Tomac can get good starts in moto two as it could be on for the overall win but the GP men can’t afford to give the American such a big advantage again.

A rougher track greeted the riders for race two and it was Tony Cairoli who took the holeshot with Herlings and Tomac side by side around turn one around the top five.

It was Herlings who got the better of Tomac and got into second place within a couple of laps, intent on chasing Cairoi down. Tomac meanwhile worked his way into third six seconds down on the race leader but admitted the pace of Herlings and Cairoli took his by surprise.

Tomac couldn’t stay with them as Herlings put the pressure on Cairoli only for the Italian to step up the pace. With five minutes to go it looked like Cairoli might not only win the GP but also the world title as he was keeping Herlings 1-2 seconds behind him until the Italian went down in the corner, handing Herlings the lead and the win.

Cairoli settled for second with Tomac 30 seconds behind Herlings in third.