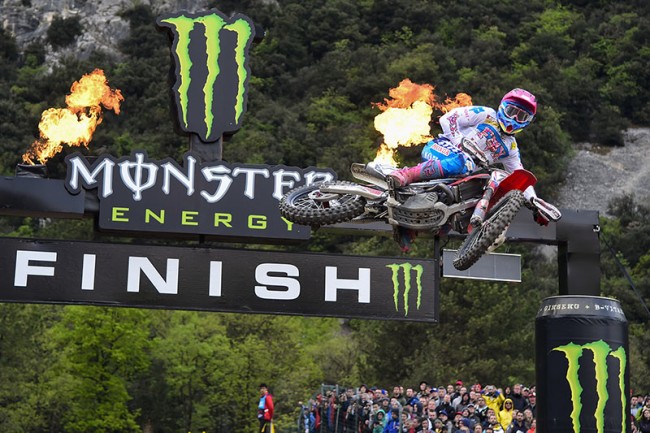 PIETRAMURATA (Trentino), 18 April 2015 – While it was only qualifying, the racing we witnessed today at round four of the FIM Motocross World Championship in Pietramurata was by far the climax of the season so far. It was intense beyond belief with three different MXGP race leaders going down. Both FIM World Champions Red Bull KTM Factory Racing’s Antonio Cairoli and Monster Energy Kawasaki Racing Team’s Ryan Villopoto crashed in the same rut but on different laps, while Team HRC’s Gautier Paulinwashed out a few turns after the finish line all on his own.

Not necessarily taking full advantage of the carnage, as he was in fact the fastest guy on the track all day,Team HRC’s Evgeny Bobryshev mastered the tricky, slick and chopped up surface here in Pietramurata to take his first ever qualifying heat win, as well as the first win of 2015 for Honda. Meanwhile nothing was out of the ordinary in MX2 with Red Bull KTM Factory Racing’s Jeffrey Herlings taking his fourth consecutive qualifying heat victory.

If the MXGP qualifying race here at MXGP of Trentino is setting the standard for race day, we are in for a treat. Right from gate drop, the race was bound to be epic. Red Bull KTM Factory Racing’s Antonio Cairolitook the holeshot, which typically results in a check-out performance, except when you have the likes ofMonster Energy Kawasaki Racing Team’s Ryan Villopoto and Team HRC’s Gautier Paulin hot on your tail.

So there it was. The race we had all been waiting for. Three of the most highly regarded riders going one, two and three around turn one. While initially Cairoli appeared to be in control, Paulin, who was feeling the pressure from his Team HRC teammate Evgeny Bobryshev surprisingly dropped the hammer on RV2 and took over second.

While our attention shifted to the impressiveness of Paulin’s speed, Cairoli crashed! The crowd, being Italians went nuts and as we all turned to see Cairoli peeling himself out of the mud, we also lost Paulin who had also made a mistake a few turns earlier.

So, in the matter of a lap Villopoto had the lead and flashbacks of Thailand were being spoken of. Would the American run away with it? We all knew it was possible.

Suddenly, the craziest race ever, just got a little crazier. Villopoto started picking up the pace, putting in that relentless charge he has become known for, while Bobryshev was dealing with the angry or hungry, depending on your perspective, duo of Cairoli and Paulin.  As Villopoto begun to distance himself over Bobryshev ever so slightly, he then threw it away in exactly the same rut that had caught Cairoli out earlier.

With Villopoto hitting the deck, Bobryshev found himself in the lead and managed to control it for the few laps that remained. Bobby qualified on pole for the first time in his career as Cairoli managed to bounce back for a narrow second over Paulin and Villopoto.

As for the actual red plate holder, Rockstar Energy Suzuki World MXGP’s Clement Desalle, he collided with Monster Energy Kawasaki Racing Team’s Tyla Rattray on lap one which resulted in Rattray receiving medical attention. Desalle did manage to remount, but was so far back, twenty-second place was the best he could do.

As the rain lashed down right before the MX2 qualifying heat race, curiosity started to mount. The Pietramurata circuit is rock based, and with the circuit drying out over the morning, the blue groove and marbley base became greasy providing the riders with an extra challenge.

When the gates dropped it was Wilvo Nestaan Husqvarna Factory Racing’s Aleksandr Tonkov who was eager to avoid getting showered in pebbles, and took the holeshot. While the Russian led the first lap it wasn’t long before Red Bull KTM Factory Racing’s Jeffrey Herlings went by, which was a move that was later replicated by Honda Gariboldi’s Tim Gajser. With Tonkov dropping back to third and appearing to tire, the defending MX2 world champion Monster Energy Kawasaki Racing Team’s Jordi Tixier pushed through.

Meanwhile a duo of stoney hard pack track specialists, Monster Energy Kawasaki Kawasaki Racing Team’s Dylan Ferrandis and Standing Construct Yamaha Yamalube’s Valentin Guillod, were on missions of their own. Both riders had had horrible starts but managed to pick off a decent amount of riders to finish fourth and fifth respectively while Tonkov managed to hold on to finish sixth.