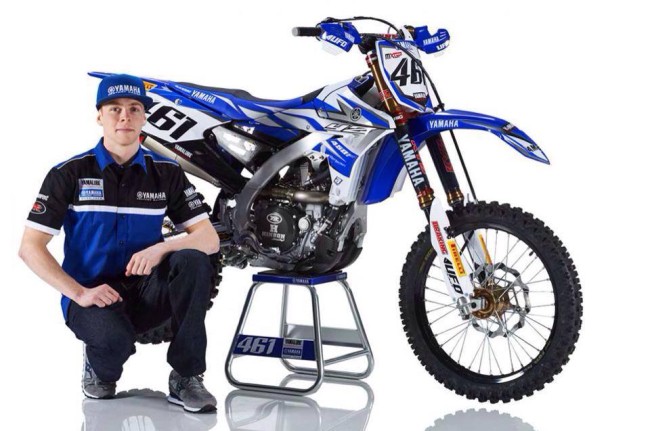 There are many rookies moving into the MXGP class for the 2015 season. Gatedrop will now tell you more about these rookies and assess how they are likely to do this season.

Out of the new rookies to race the MXGP class three of them have managed to land factory rides.

Yamaha decided to sign Romain Febvre after he had an impressive season in MX2 finishing third in the championship. Although, Febvre was very fast last year he crashed quite a lot and looked on the edge so I felt that a 350 might have suited him in MXGP better. However, in the Italian championship rounds he looked so smooth on the 450 and very comfortable on the bike. His results have been good in pre-season and he isn’t intimated by the bigger names in that class so I think he could be a solid top ten rider in mxgp.

Out of all the rookies I feel like would have benefitted the most by staying in MX2 is Glenn Coldenhoff, he admitted himself he would have stayed in mx2 one more year if he could. However, he has been in America most of pre-season doing a lot of moto’s with Kevin Strijbos and looked very fast and like febvre comfortable on the 450 machine. His results at Hawkstone International were also promising as he was leading all the moto’s for a while which is encouraging for him and will give him confidence. The thing about Glenn is that he has always been a great starter which will be vital this season and that will help him. On Friday the 13th (how ironic!) he had a crash and originally thought he was okay but turns out he broke two toes, he is still riding Qatar but we might not see a fully fit Coldenhoff until the Italian or Dutch GP.

Ice One Husky gave Nathan Watson a chance last year when Tyla Rattray got injured and they were that impressed with him they have decided to sign him for this year. It is a big opportunity for Nathan but I think he will do okay, it’s important the team don’t put too much pressure on him though. He was originally only supposed to do the European GP’s but he is on the entry list for Qatar and Thailand so it looks like he will do all the GP’s now. I believe this is the right decision for him because the fly away GP’s won’t be as deep as guys like Boog, Teillet and Delince won’t be doing them so Nathan should get better results at the fly away races which will help his confidence.

Jose Butron had a disappointing season in MX2 last year and really needs to find his 2013 form this year or I think he might struggle in the MXGP class. Marchetti Racing have signed him for the 2015 season and he will receive some factory support from KTM.  Pit Beirer said in a recent interview that Jose had the chance to be Cairoli’s team mate in the MXGP class in 2014 but he wanted to stay in MX2 to try and beat Herlings. I feel like he put too much pressure on himself to try and beat Herlings and struggled because of that. If he finds his 2013 form then I think he will do okay in MXGP and he is a good starter so that will help him as well.

24MX Honda have an all-rookie line up for 2015 as they signed Swedish rider Filip Bengtsson and Frenchman Christophe Charlier. Filip made a lot of fans last year with some awesome results in the sand GP’s that he did with his unreal sand riding. However, I feel he really needs to improve his hard pack riding to be a consistent top ten rider in the class. He has a two year deal with the team so I feel like he needs to figure out his hard pack riding and then he can become a threat in 2016. Look out for him at the sand races though; he could definitely be a podium contender at the likes of Lommel and Valkenswaard.

Christophe is a lot more suited to a 450 due to his build and the way he rides the bike so I think he could do well in MXGP if he can get good starts, he has always been the kind of guy that can run the pace at the front if he gets good starts but if he gets bad starts then he tends to struggle coming through the pack. I am surprised that he didn’t try to move to the MXGP class before now as I think in previous years he could have got a factory ride but he couldn’t get one this year as so many guys are moving up.

A new team in the MXGP class is Assomotor Honda, they have moved from World Supermoto to focus on MXGP, it’s always good for the sport to see new teams in the series.  They have signed Alessandro Lupino and Kei Yamamoto for the season. Andrea Bertolini will also be the team manager for the season and I believe they will receive some factory support from HRC which is good for a new team. I believe Alessandro could surprise a lot of people this year, he has always went under the radar but working with Andrea will help him a lot and I’m picking him to be surprise of the season and get a lot of top ten results!

If I had to make a prediction right now then I think Romain Febvre will be rookie of the season if he can stay fit…. but who knows, it’s going to be a season full of surprises!