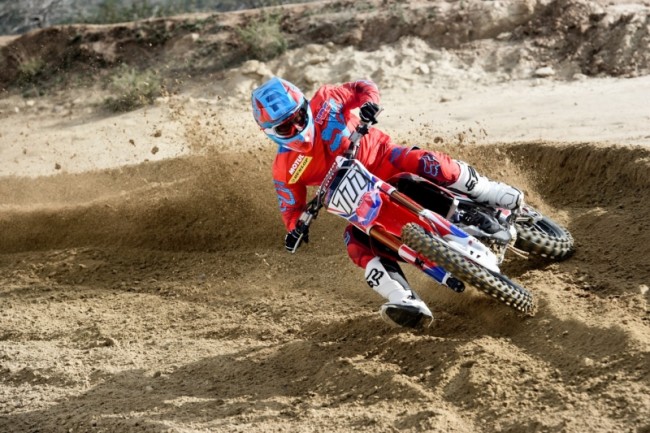 With all the hype on the championship contenders and a handful of rookies moving up, lost in the 2015 anticipation are five very good riders who don’t deserve to be forgotten.  Here, we look at the riders who might just be motivated at the lack of coverage, and in certain circumstances a lack of a factory ride.

All five have a lot to prove this season but they all have the talent to show the teams and the fans that they shouldn’t be written off!

Steven Frossard: When you win the Motocross of Nations and come fifth in the world in your first season back after pretty much two years of injury you would expect to be in a factory team! But unfortunately for Frossard Tyla Rattray’s friendship with Ryan Villopoto usurped Frossard’s speed and the Frenchman was left without a ride.

But for Steve Turner and the ForkRent KTM team, they might have landed one of the biggest signings of the season. For a privateer team to get some of Frossard’s calibre is huge, and if Steven can adapt to the KTM he can run with the leaders. He has beaten all the main contenders before, including last season, and Frossard should have a pretty big chip on his shoulder and want to prove people wrong.

He was fast at Qatar last year too and if he can stay on, Frossard could be a top five threat all year and leave Steve Turner grinning from ear to ear!

Shaun Simpson: Shaun Simpson had one of the best seasons of his career last season and yet he still couldn’t get a factory ride. A dislocated shoulder at the end of the championship dented his hopes of a top five finish but Shaun still claimed seventh in the championship, his best ever result in the main class. Simpson spoke with a few people about a factory berth including Yamaha but nothing came of it and Simpson re-signed with Roger Magee Hitachi KTM UK team.

But that is certainly not a bad thing, under Magee’s tent Simpson has had the two best seasons of his career and the laid back nature of the team and letting Shaun and his dad just get one with it seems to suit Shaun’s way of racing perfectly.  Good on all surfaces and always there week in, week out, Shaun can never be counted out, if he can get off to a good start in the overseas races and keep his confidence high, Simpson won’t be afraid to ruffle some feathers of the factory boys at the sharp end yet again.

Evgeny Bobreyshev: The forgotten factory rider, Evgeny Bobreyshev really needs some results this year to maintain his factory status. But people forget that when it comes to speed, Bobby has the stuff!

“With his history, people will say he won’t do it, commented Honda’s Roger Harvey. “But we know he has the raw speed and we just have to bring that back out of him. He has had some hard times and ridden with injuries. So that’s the plan this year, to keep him free of injuries and let his confidence build and come back into it where he should be – which is a top five guy.”

Clearly Honda still believe in him and if Bobby can continue to believe in himself and stay injury free there is no reason why he can’t be battling in the top and contending for podiums. Bobreyshev knows this is a big year for him and he will want to impress, and he has the speed and the talent to do it.

Dean Ferris: The determined Aussie came back to MXGP last year after a brief liaison with US supercross and was a top five contender in MXGP almost straight away. A broken femur in a horrible crash at the end of the year destroyed his pre-season preparations but Ferris has done well to be back on the bike so quickly.

Ferris may start the season slowly as he works his way back to full speed but he has a factory Husqvarna behind him under the Jacky Martens awning so has the tools to do the job once he is back on form.

With his determination and talent I think Dean will find his way back into the top ten and with good starts could push the top five once he hits his stride. But for the first three or four rounds Ferris will want to get through clean and put some laps under his belt as he continues his speed.

David Philippaerts: Philippaerts, like Shaun Simpson, is an old school motocross racer. The 2008 world champ just loves competing, training and racing his bike. Whatever the conditions Philippaerts will be out there giving it his all. Philippaerts had a slow start last season but he was back into the top ten and knocking on the door of the top five until he broke his foot just before Lommel.

Now, with a years experience under his belt of running his own team and back to full health, Philippaerts looks like a new rider, or at least the old rider who won the World title in 2008! Phiippaerts has shown brilliant speed in pre-season and looks very comfortable and aggressive on the Yamaha. It is the best he has looked for a few years and you know that if he gets a sniff of the front of the pack he won’t hesitate to go for the win!

An honourable mention should also go to big Ken De Dycker, the Belgian suffered from a broken wrist last season, but even when he was back on the bike the wrist still gave him bother. Now, with an operation to fix the problem, Ken is back to full fitness and has the newly designed factory 450 KTM at his disposal. If he is in the mood he will be battling for podiums and maybe even wins on his day in 2015!