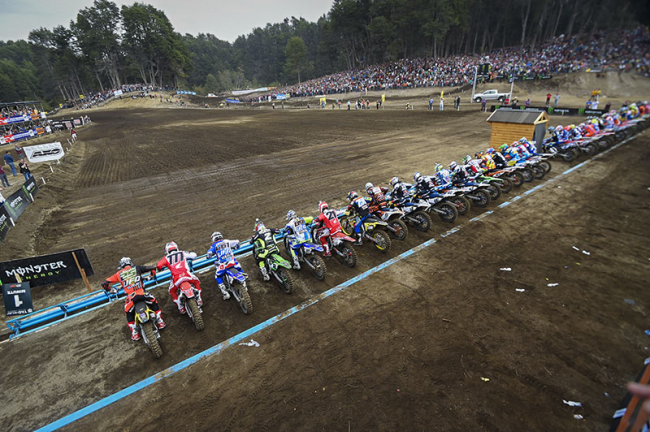 NEUQUEN (Patagonia – Argentina), 07 April 2016 – Nestled in the greenery of the Correntoso and Nahuel Huapi lakeshores, surrounded by the dramatic peaks of the Andes mountains, the venue in Villa la Angostura where the fourth round of the FIM Motocross World Championship will take place this weekend is one of the most scenic and amazing stops on the calendar.

As if the breath-taking location wasn’t enough, the icing on the cake is the fact that the track is a motocross riders’ paradise. Made out of a unique black pumice-like soil, which looks grippier than it actually is, the layout of the track is mega flowing, one of the widest of the season, and has a huge variety of jumps and obstacles. The riders rave over how awesome it is, and how the options and places to pass are endless. This makes for epic racing which we witnessed last year when the FIM Motocross World Championship returned to Argentina for the first time since 1995, where Max Nagl clinched the grand prix win over Clement Desalle in MXGP, while all craziness broke loose in MX2 when Jeffrey Herlings crashed out of race one which allowed Dylan Ferrandis to stand on the top step of the podium for the first time in his career.

In less than eighteen months Monster Energy Yamaha Factory Racing’s Romain Febvre has gone from an overlooked rookie to the granddaddy of MXGP, despite the fact he is only twenty-four years old. Just when you think you have seen all the fiery Frenchman has to offer, he turns it up a notch and wows you once again just like he did two weeks ago in Valkenswaard, The Netherlands, when he pulled the pin on his grenade and launched it at the enemies, passing teammate Jeremy Van Horebeek on the penultimate lap and Antonio Cairoli on the final lap for one of the most hard fought victories of his career.

Febvre only finished seventh at the MXGP of Patagonia Argentina last year, so a podium finish here at this awesome location is sure to be his mission. Meanwhile the new rookie on the block, Honda Gariboldi’s Tim Gajser has quickly shaken his underdog status with three race wins from the last six motos. TG243 has landed on the box at every round so far this year and will be out to keep the wind in his sails this weekend.

As for last years MXGP of Patagonia Argentina winner, Rockstar Energy Husqvarna Factory Racing’s Max Nagl has not had the best start to his 2016 campaign but he came out firing on all cylinders at the MXGP of Europe where he won the qualifier and finished the weekend on the second step of the podium. During the press conference in Valkenswaard, Nagl mentioned how excited he was to return to Argentina and how much he enjoys the track here. That positive frame of mind is sure to bring some good karma to the German.

And then there are the veterans; Red Bull KTM Factory Racing’s Antonio Cairoli and Team Suzuki World MXGP’s Kevin Strijbos who are both extremely familiar with the technique of popping corks, yet neither have done so in a while. The saying goes ‘Musicians don’t quit when the music stops. Musicians quit when there is no music left inside them’ and both of these riders wouldn’t hesitate in telling you there is plenty of music left inside them.

Tony Cairoli, especially, was super quick here last year. He went pole and was in good shape for the podium before chucking it away when he clipped his peg while scrubbing during a battle for the lead with Clement Desalle. Speaking of Desalle, the Monster Energy Kawasaki Racing Team rider tied with Nagl for the win here at the circuit of Villa la Angostura last year. He is an animal at this track and if his arm is nearing 100% he could be a threat to the top step.

On a lesser note, Team Suzuki World MXGP’s Ben Townley will not be lining up this weekend due to sickness.

Red Bull KTM Factory Racing’s Jeffrey Herlings has one of the most epic win rates in the paddock. He has racked up wins in loads of different countries, yet Argentina is not one of them. Last year ‘The Bullet’ went pole by a country mile and was fastest man on track, but his hopes of winning the grand prix went up in smoke in race one when his bike was left mangled after getting hit mid-air which saw him crash spectacularly.

So far so good, The Bullet appears to be on it, as they say in Britain, this year; he is yet to be beaten and keeps getting better and better. As always, it’s hard to bet against him for the win, but as we saw last year, anything can happen.

As for the rest of the rippers in MX2, Red Bull KTM Factory Racing’s Pauls Jonass was mega quick here last year where he finished up on the second step of the podium while Team Suzuki World MX2’s Jeremy Seewer landed on the box for the first time in his career in third. Both are more than capable of uncorking a bottle of bubbles this weekend, the question is, in what order?

Meanwhile Rockstar Energy Husqvarna Factory Racing’s Thomas Covington is known to perform better at the fly-aways. He was fourth here last year although this weekend could be a bit tougher as he withdrew from the MXGP of Europe a couple of weeks ago with a foot injury.

Unfortunately Kemea Yamaha Official MX Team’s Brent Van Doninck is also injured and will not be racing after dislocating his hip during a national race last weekend, but his teammate Benoit Paturel will also be one to watch as he continues to pick up the pace.