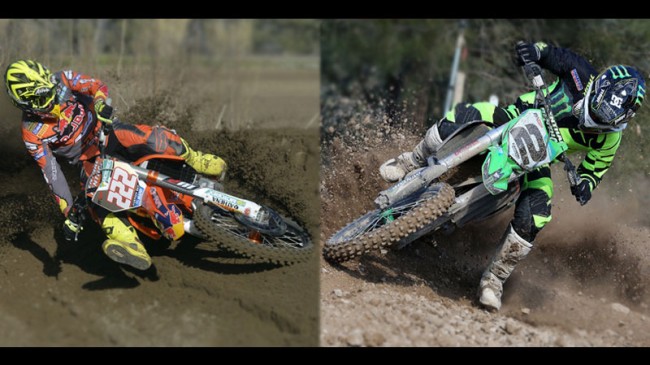 Jonathan McCready: It is possibly the most anticipated match up in motocross history. The two greatest riders of their generation facing off in the World Championship with no home country advantage – just like it should be.

Can he cope with the diversity of the tracks and will his all out aggressive style work on the slower more technical tracks in the World Championship? On the other side of the coin is Cairoli, he is smoother and more calculated than RV but will he have to step up the intensity especially in the beginning of the race to stay with the rapid American? It is going to be fascinating to see whose style works and who has to adapt.

I keep going back and forth but i have to give AC the edge (barely).  Cairoli  has proven his adaptability on all the tracks and travelling to all the countries, that for me is what makes AC the best in the world. He has proven he can rise to challenges before, like reclaiming the World title off Pourcel in 2007 in dominant fashion, or winning virtually every moto of the MXGP class when he lost the red plate to Desalle a couple of years ago after two DNFs in Sweden. AC can up his pace when required.

But if Villopoto can prove he has the versatility over 16 countries across four continents and 18 weekends and 36 days of racing and comes out on top, then he finally and accurately can be called the best in the world – and he will well and truly deserve it! RV can definitely win this championship, it won’t be easy but he is brilliant under pressure and if it comes down to a few points going into the last round at Glen Helen I don’t think anyone would bet against Villopoto getting it done and riding off into the sunset as World Champ.

Andrew McKinstry: I am so happy RV has decided to come and race the MXGP this year, more top Americans should definitely do the same. I think he will win Qatar as the track will suit him as well as Matterly Basin and Villars Sous Ecot as those tracks don’t get that rough. I think he will be surprised at how hard the Italy, Czech Republic and Sweden tracks will be as well as the sand of course!

RV said in a recent interview that he said that he doesn’t think he will have problems adjusting to the tracks because they only get two 15 minute sessions before first moto in USA. However, I’m not so sure…he’s forgetting that he has rode those tracks in USA pretty much all of his life and the tracks are pretty similar in USA as well.

In GP’s you can go from the sand of Valkenswaard one week and then somewhere like Sweden the week after… He will need most of the Saturday sessions to get used to the tracks in my opinion but his speed is unreal so I expect him to challenge for the title but it will be close!

I think Cairoli will win the championship; the guy is so smart and always knows when it’s best to finish second or third. I honestly think RV coming means we will see Cairoli’s real speed… in previous years he has been smart and if he ever got a bad start he would take his time to come through the pack.If RV gets the holeshot and Cairoli gets a bad start he won’t have time to hang about this year especially as RV’s speed at the start of the moto will be fast. I am sure over pre-season Cairoli will have also been working on his sprint speed at the start of the moto because he knows RV’s is so good, it’s going to be an intense and fascinating battle that’s for sure!

Jeremy Van Horebeek is the real dark horse, he believes he can win now and if he can win a GP early in the season he could challenge them both. Gautier Paulin on the HRC could be very dangerous as well and will definitely will moto’s… working with JMB could be the big difference for him.

Clement Desalle has been Cairoli’s main threat these last few years so you cannot count him out and will win moto’s…. this championship is going to be all about who can stay injury free and be the most consistent because there will be a lot of guys that win races!

Paul McCready: Ryan Villopoto has added a whole new demention to MXGP this year. The 10 time AMA Supercross & Motocross Champion, the guy that the Americans proclaim to be the best in the World facing of against the 8 time World Champion is a mouth watering propest.

I feel with RV we know he is fast and aggressive, we know he will win plenty of races and be fighting for podiums every week but can he avoid injury and finish a full motocross season on the 450? He has only done it twice in the AMA 450 Motocross championship! Chad Reed commented on the Pulp Mx show that he heard Villopoto has chosen to ride with his U.S. bike settings but the tracks are much different in the world championship so it will be interesting to watch how his bike is handling the first few rounds and if he will need to change his set up.

The biggest question mark for me is how much had Cairoli left in the tank when he has been winning the last six MXGP/MX1 titles relatively easily. Once quoted as saying he normally rode at 80%, how often have we actually seen him ride at 100%? Certainly in 2012 after he had a double DNF in Sweden which eliminated his huge points lead, he went on a rampage winning 13 out of 14 motos showing speed nobody could match. However Cairoli hasn’t been in a dog fight for a championship since Pourcel stoppped him retaining his MX2 crown in 2006, which leaves me to wonder how will he react to the pressure if RV, or the others for that matter, can keep the champioship points close. Jeremy Van Horebeek recently commented that he thinks pressuring Cairoli will result in mistakes appearing from the Italian.

I am still going for Cairoli to win this year. I think the motivation of Ryan Villopto coming over will push his riding to a new level, like we seen from Everts when Tortelli annouced a return to the World stage in 2006. It will be close but Cairoli will edge it… lets hope injurys don’t play a role so we can see these two greats do battle!