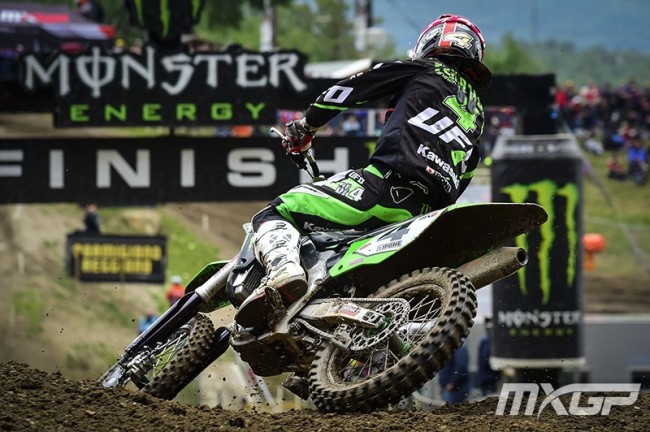 A bad start cost Jeffrey Herlings the win in Spain despite a superb effort to catch the leading trio by the last two laps.

It was Dylan Ferrandis who took the win after controlling the race from the front from Jonass who made a late move on Benoit Paturel for second. Ferrandis admitted his wasn’t riding as well as he wanted and with Herlings doing laps two seconds quicker than the race winner, Ferrandis will know he needs to find something more to beat the Dutchman over 30 minutes tomorrow, but he will have first gate pick tomorrow.

It was another good start for Adam Sterry in the top five and the Brit would eventually finish ninth with Anstie in eleventh.

It was drama in MXGP, but all behind Tim Gajser who cruised to the win who said he rode his own race and “found some nice lines for tomorrow.” Max Nagl followed Gajser home in second with Bobby third and a fast Guillod fourth.

But the big news was a DNF by Romain Febvre. The Frenchman ran into Shaun Simpson in a tight left hand corner after the Scot made a mistake, both tipped over, only for Cairoli, trying to nip through a gap on the inside, to ride into the shoulder of the Frenchman as he lay on the ground trying to get up. Febvre glared at Cairoli then went off the track for medical attention before riding back to the pits.

The latest news from Yamaha on Febvre is he has no broken bones, but is sore and is a question mark for tomorrow subject to more medical tests.

Cairoli meanwhile who started around fifteenth came through to sixth ensuring he has a decent gate pick tomorrow to try and take on Gajser.

Shaun Simpson had a mechanical DNF possibly caused by the collision with Febvre while Jake Nicholls took seventh just ahead of an impressive Gautier Paulin who got caught up in the Febvre crash and came from 18th to eighth and posted the fastest lap of the race on the final lap!

It was also good to see Desalle back and on form with a solid fifth place.