MXGP of Emilia Romagna: The Preview 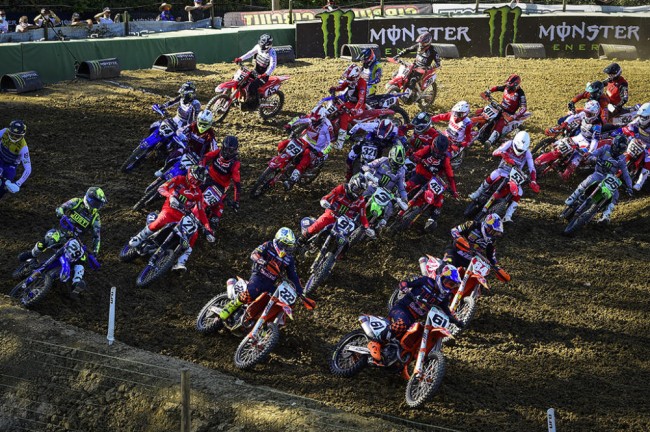 Excitement is building ahead of the third race of the Italian triple-header in Faenza with the MXGP of Emilia Romagna.

The previous round saw some more superb racing, plenty of battles and victories, as Red Bull KTM Factory Racing reached some incredible milestones!

In MXGP, Jorge Prado claimed a historic overall win, as he took to the top step of the podium for the very first time in the premier class.

Meanwhile more milestones were reached, as Antonio Cairoli lined up for his 250th Grand Prix, which he finished 4th overall, following two strong races and missed out on the podium by just a mere point! Then came the overall victory of Tom Vialle who clinched his first double race win in MX2 and thus winning the round of Città di Faenza.

Though KTM were not the only ones to celebrate great moments, as Monster Energy Yamaha Factory Racing’s Jeremy Seewer rode an incredible opening race, to finally take his first MXGP race win. This win was a long time coming for Seewer, who has been carrying incredible momentum since the season resumed in Latvia.

Another highlight of the day was the return of Thomas Kjer Olsen of Rockstar Energy Husqvarna Factory Racing to the MX2 podium. Following an unlucky start of the season for the title hopeful, things seem to be back on the up for the Dane who rode two solid races and bought himself a one-way ticket to the 3rd step of the podium.

But a new GP is a whole new opportunity for new winners and new highlights, and with yesterday’s activities behind us, it’s time to look ahead and prepare for the next one.

In EMX2t, Brad Anderson of Verde Substance KTM will no doubt be pushing for that third overall victory and be looking to add some more wins to his championship chase. Loris Freidig will also be lining up for the races as he looks for more consistent results and a chance to close in on the championship leader. Italian, Mario Tamai is currently third in the championship and with a handful of rounds to go will no doubt be pushing for some more top 5 results.

In the EMX125 class, it will be interesting to see whether Fantic Racing’s Andrea Bonacorsi can keep the momentum going to take a third back-to-back victory. At the previous round he moved into the lead in the championship, as a result of two strong races. Pietro Razzini also had a successful round last time around, finishing second in both races and will no doubt want to repeat the same at the round of Emilia Romagna. RFME GasGas MX Junior Team rider Guillem Farres has so far had a good run in Italy, standing on the podium on two occasions, so it will be good to see if he can do the same once again and finish the Italian trip on a high.

With Jeffrey Herlings out of the GP, following a nasty crash in the free practice at the previous round, this leaves the door open for Antonio Cairoli and Team HRC’s Tim Gajser to pick up some solid points and close in on the championship.

And it seems like Gajser is getting back to his old self. The last few GP’s have been tough for the defending world champion, who revealed that he was putting way too much pressure on himself early on in the season in terms of the title chase. Now with a new outlook and focus of enjoying the racing and doing his best, it seems to be working for him as a solid 5th and a win in the second race was the comeback Gajser needed.

Now with the confidence boost of a race win and podium finish could be good for the Slovenian, and it might be just enough to put him back at the front.

There is no doubt that Jeremy Seewer will be looking for a more solid weekend this time around. He won the opening race yesterday, though that second one was much tougher. It all started with an issue out of the gate and then it was a struggle picking off those riders, but if he can get out of the gate with the leaders, there’s a chance we could see him get a win once again and climb higher on the podium, or even chase that first MXGP overall victory.

Despite struggling with his ongoing knee injury, Antonio Cairoli is still fully able to push in the races, consistently fighting at the top end of the field. He’s already had a podium here in Italy and was only a point down from the third step yesterday so that next one could see him back up there.

His team-mate Jorge Prado will no doubt be pushing for his first MXGP race win, as he already has the GP overall victory under his belt. Yesterday the young Spaniard rode two solid races to finish 2nd in both, which gave him the upper hand for the podium. He’s been starting well too, it’s just a case of being able to hold on to that lead and fend off the pressure from the rest of the field. Though it’s easier said than done as the class is fully stacked this season.

Then there’s Mitch Evans of Team HRC, who has been really impressive recently. Yesterday he battled inside the top 5, even challenging riders such as the 9-time world champion Antonio Cairoli. He finished 9th and 4th in the races, which is pretty exciting, considering he is still recovering from his shoulder injury and finding his feet as an MXGP rookie. It will be interesting to see what he brings this time around.

Romain Febvre from the Monster Energy Kawasaki Racing Team has also been pushing for that podium. He placed 5th overall last time around and was 4th at the previous round for the MXGP of Italy. He clearly has the speed around the Monte Coralli circuit as he set the fastest lap time of the day in MXGP at the MXGP of Città di Faenza, so all is missing is that start to give him the advantage and save him time having to pass other competitors.

Fellow Frenchman, Gautier Paulin of the Monster Energy Yamaha Factory squad is also another rider to watch at this next GP. He’s had some solid top 10 results and was looking strong at the MXGP of Italy, before that big off in race two. Though if he can stay out of trouble, we can easily expect him to edge closer to that top 5.

Italian rider Alessandro Lupino of Gebben Van Venrooy Yamaha Racing had one of his best GP performances during the week, with firm 7th in the opening MXGP race and then a 12th in race two for 10th overall. There’s no doubt he will be pushing for more this time around as we continue his Home GP run.

With his first double race win, Red Bull KTM Factory Racing’s Tom Vialle will be focused to go for a back-to-back GP win at the MXGP of Emilia Romagna and repeat the two races he had yesterday. Vialle’s starts have been on point recently as the KTM rider has been consistently at the front, and yesterday’s races were just what he needed to get, those wins to get back to the top. He also extended his championship lead to 21 points, whereas it was just 3 coming into the GP, which also gives him a bit more breathing room for the next one.

Though Jago Geerts from Monster Energy Yamaha Factory Racing will be using the next GP as an opportunity for redemption after a tough day yesterday. In the first race he was 3rd behind Vialle and Renaux, though that second one was what cost him valuable points. As he pushed Vialle for the lead, the Yamaha rider made a mistake going uphill and crashed out. He re-joined further down the field and then crashed again. Eventually he finished 9th, though it was a race he no doubt will want to forget. Though a new GP is another opportunity to do better and Geerts will be pushing to do just that. He has what it takes to win races here, all he needs to do is keep it on two wheels so it will be interesting to see if he can do that.

SM Action Yamaha M.C Migliori J1 Racing rider Maxime Renaux will be looking to carry that podium momentum and finish the Faenza triple-header on a positive note as he goes for his third consecutive podium. He took his first ever GP win in MX2 last weekend, then finished second yesterday so it seems fitting that he would go for another. He’s been getting the starts and has shown that he can handle the heat from the riders behind him, so it’s a case of getting his head down and keeping it on two wheels.

Rockstar Energy Husqvarna Factory Racing’s Thomas Kjer Olsen made his long-awaited return to the podium yesterday with a strong 3rd overall, his first of the season. This season has been not what the Dane had expected, as he was hoping to push for his maiden world title, though as it sometimes happens, things don’t always work out how you’d like them to. Instead Olsen has struggled with numerous injuries which have made it tough for him to race.

But the MXGP of Città di Faenza has been a turning point for the Husqvarna rider who put into two solid results and was finally able to ride pain free. It will be good to see if he can continue this positive streak and climb back to the top.

His team-mate Jed Beaton will also be pushing for a more consistent day. He’s been placing well in the time practice sessions recently, but it’s those races that are making things hard work. Yesterday the first race was tough for the Australian who eventually finished in 12th, though that second one was much better. In MX2 race two, Beaton was able to get a good start and hang with the leaders. He pushed hard all race as he started to close in on the top, then Geerts crashed out which allowed him to move into P2, where he eventually finished.

Having proven that he can run with the top guys, it would be good to see him do just that in both races and finish with a solid overall result.

F&H Kawasaki Racing’s Mathys Boisrame has also been looking comfortable at the track here in Faenza. Most races he has spent pushing with Vialle, Geerts and Renaux, though some small mistakes have cost him a chance to return to the podium. At the MXGP of Italy, the Frenchman was just 2 points from third overall, and yesterday the crash in race two is what cost him the chance to challenge for a podium once again. Though with a couple of days to reset and re-group, let’s see if he can step it up a gear and get back to challenging the two championship front runners.

It is also worth mentioning that Mattia Guadagnini of Husqvarna Junior Racing Maddii has had some pretty impressive moments in the MX2 class. In the first race yesterday, he led for 6 laps before coming under pressure from the GP regulars. Though he did well to fend off some established names of the category and finished the race 6th in the race. In the second MX2 race, he started in the mid-field and worked his way up to 8th.