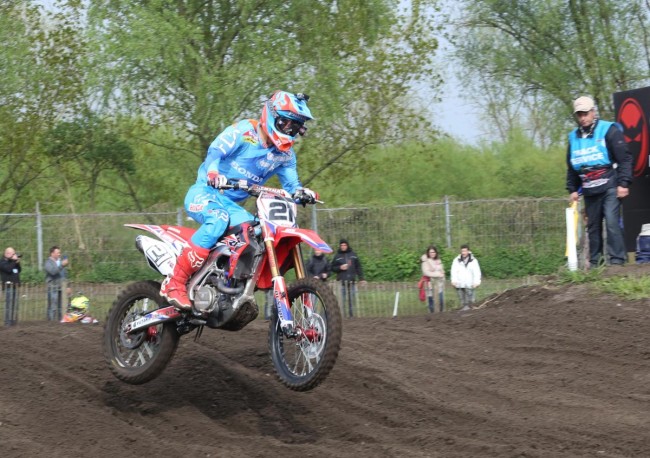 Check out what the top three overall riders in MXGP and MX2 had to say about the weekend they had!

Sometimes I prefer to be second and have a good ride than to be bad. I mean a win is a win but sometimes you struggle and the feeling is not so good. I am really happy with this GP win and I think I deserve it with the way I rode, its hard work and I’m just looking lap after lap and not really any GP records. I want to be there every weekend and that’s my goal, im just looking at my riding and concentrating on that. It’s been going great and I dominated this weekend by winning the qualification, first moto and second moto. It was the perfect weekend for me!

The track was tricky, yesterday in qualifying and in the first moto as well but then they flattened the track for the second moto which meant the track was a lot faster. I managed to take the lead, then pull away by a lot of seconds and I was safe. There was a yellow flag but I didn’t jump the double, I crashed there last year so I wanted the rider to be safe. I was able to keep a comfortable lead at the front so it was good.

Of course it’s good to take points of tony and nice to finally see the results on paper! On Friday I knew that this could happen but I would prefer to fight with tony than see him crash but that’s racing.

We have put hours and hours of testing and training in and for me it has been a big change. Having maybe the best bike but not the best results is difficult sometimes. Sometimes I have been taking the wrong choices but I learn from it and right now I think we will go on to have some great races.

I didn’t need the motivation from last year because I am always motivated to be 100% or 110%. Last year was the turn of my year (cause of the injury), maybe it is also the turn of 2015.

After yesterday I was not really thinking about the podium because I had a really tough day. When I woke up in the morning it was one of those days were I don’t feel very good. It didn’t matter what they changed on the bike, I was just struggling all day. It definitely changed overnight, we did nothing but it was just different. When I went out for warm up this morning I was going really fast and we tried some different tyres which keep on working. We keep on testing to try and improve everything, my plan today was just to ride smart. I didn’t want to push too hard because the track was quite dangerous in some spots, I didn’t want to take too much risk.

It will be the first time for me in Spain because last year I wasn’t there but it’s a new track, I’ve watched it on the TV and it looks really nice there. I think that the weather will be hotter there than what it was here. Having the red plate is great for the team, it’s also nice to have for myself but I just need to keep on going and work hard.

I was really proud that I managed to make a podium for Kimi today, he is a big idol for me as he is from formula one which I am a big fan off. I really enjoyed seeing him this weekend and to talk with him, I think he was also pretty happy today.

I am still not really used to winning, it is still something really special for me! When I finish second or third then I am always happy with that as I am on the podium. There will be days were I will have a bad day and wont make the podium but I will just deal with that. At the moment everything is going well because the team and bike is just perfect, I hope I can keep this level for a while.

Today was okay, I had a similar weekend to max because yesterday I was not feeling so good, especially in the qualification after my big crash. I was a bit disappointed about it because I know it’s important to be good on Saturday, especially on this kind of track. I made a small mistake on a big jump and landed too much on the left on the triple section. It was a difficult weekend but I still wanted to go for the podium and this is a podium I am proud off, in the sand. It’s been a long time since I got a podium in the sand so this gives me some confidence and that my condition is good, I feel good. I am still on the podium and it’s still the beginning of the season, it’s really important and it will be like this for the season. It’s important to podium every GP to keep you in the classification.

Losing the red plate is not a problem, I take some good points for the championship. The season has just started and its quite tight again. Its good so far and now we are going to some good tracks that I like and I hope we have some good racing. I am a bit disappointed that you wait until you see a lot of crashes in the section before you make changes. We don’t need that actually to have good racing, we see in the second moto, that’s all I wanted to say about the track and the rest is positive.

It has been a good day, obviously we had a good day yesterday too. I had a good start in first moto and went to the lead pretty quick. In the second moto I struggled a bit with the start, the reaction was actually pretty good but I got out of balance and some other guys were out front. I was able to work my way up to third, I had to re-group and pass many riders and I was able to do that. I was able to lead by a really good distance so we walked away with the win. The track was pretty gnarly, the flattened it for the second moto which was a shame but I was able to go 1-1 so it was good.

Everyone expects me to win but it’s not that easy you know, it’s hard to stay out of trouble and win six times in a row, twelve motos. You cannot make one mistake and the competition is strong, the guys next to me definitely make it hard for me but luckily I was able to pull it off again. For sure, I am pretty good in sand but the guys next to me are also fast as well, I’m happy and thankful we could pull it off.

In Argentina we had some bad luck, it didn’t happen on purpose for sure as it was just a racing incident with Pauls touching me in the air which meant I had to stop the race with a mechanical issue so I lost perhaps twenty-five points. In Italy I had a bad start in the second moto and finished second so again I lost the GP. It feels good to win the GP today, it’s my third one of the season. I am looking forward to Spain now, the track will be tough, it’s a tough track and difficult to pass out there so hopefully this year will be a bit better and I expect the competition to be strong again.

To be on the podium is always good and also good for my confidence. The first moto I had a good start and finished in third place, I was a little bit alone. In second moto I had a bad start but came back to the front and because of the small things with Dylan I got on the box. My feeling was really good but in the second moto I had a problem with the bike for the last ten minutes and decided I couldn’t fight anymore so I just kept my place.

We did a really good job in the last two weeks with the bike and its working really good, I’m really happy with it and we are all going the same direction in the team. My family and my girlfriend are always pushing me so I’m happy.

I am really happy, the last year has been tough and this year is going pretty good. I have had some small injuries, like in Qatar were my shoulder came out and it was a bit of a struggle. Finally, it has came together and we are here on the box and with the new bike. It’s an amazing bike, I pull three holeshots, yesterday one and today two. It was just a good weekend and for sure I am not the kind of guy to like that track. I live in Italy and I prefer the really hard pack tracks so it’s really special.

I am looking forward to Spain, I didn’t have the best result there last year but I like the track so I am looking forward to the race. The bike is completely different, nothing is the same as before and I feel a lot more comfortable on the bike. I feel like I can ride a little bit faster and more safe, I feel much more confidence and for sure the starts are a big difference.