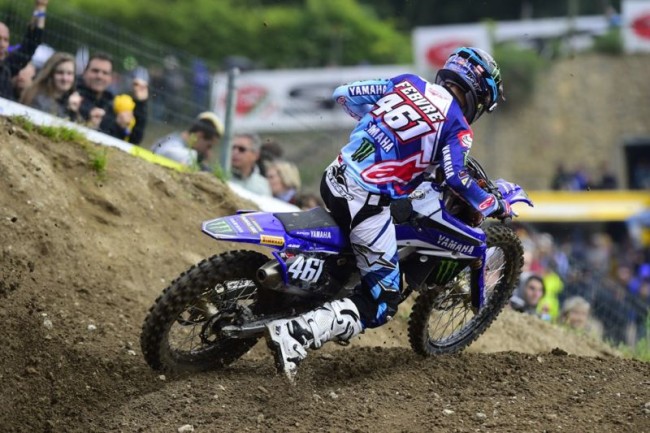 LOKET (Czech Republic), 20 July 2016 – The 2016 MXGP series will return to action this weekend at the old school clay track of Loket in the Czech Republic, this weekend for round thirteen of the FIM Motocross World Championship. With twelve rounds already in the bag, it’s a six round race to conclusion, starting right here, right now in Loket. A track that made it’s grand prix debut back in 1995 and has since hosted 19 grand prix’. Joel Smets, a familiar face in the paddock as the rider mentor at KTM, was the first ever winner here and he did it on a beasty Husaberg 500.

Loket has been good to a number of riders. Antonio Cairoli, Romain Febvre, Kevin Strijbos, Clement Desalle, Gautier Paulin, Jeffrey Herlings, Valentin Guillod, David Philippaerts and Jeremy Van Horebeek are some of the riders that have been victorious at this track. So who will make a break for it following the break? We are about to find out!

Honda Gariboldi’s Tim Gajser. What can be said that hasn’t been said already? The kid is crushing it and looks to be the safest bet for the title this year. Monster Energy Yamaha Factory Racing’s Romain Febvre should be back this weekend, and is likely to be Tim’s biggest problem, even though it doesn’t have to be since he has a massive points lead. But, if there is one thing we have learned about Tim Gajser, is that he has an all or nothing riding style and he races to the flag regardless of what is on the line. As for Romain, it will be good to have him back after his ugly crash at the FULLBACK MXGP of Great Britain.

While Tim and Romain have been dominating the MXGP class more often than not, Red Bull KTM Factory Racing’s Antonio Cairoli has captilized on Febvre’s error and is now sitting second in the championship standing. Tony has proved on a few occasions he has the goods, and feels as though he has some unfinished business in the premier class. He is 92 points down on Gajser, so his goal may no longer be ‘winning the championship’ but instead, rounding out the season in winning form.

Another rider who is looking to bounce back is Monster Energy Kawasaki Racing Team’s Clement Desalle, also known as the ‘MX Panda’. The MX Panda could really use a win before the season is out, as he has been smacking his head against the wall this year with an array of injuries suffocating his speed. In saying that, the Kawasaki ace finally made it onto the box at the FULLBACK MXGP of Lombardia-Italy, which could be a sign of danger for the rest of the guys in MXGP especially since he loves this track as the venue at which he landed on the box for the first time in his career and has also won two grand prix’ here, 2009 and 2013.

Team HRC’s Gautier Paulin is also fond of the hard clay here in Loket. He won the MX2 grand prix here in 2009 and is known to have impeccable throttle control which works well on this kind of surface. Monster Energy Yamaha Factory Racing’s Jeremy Van Horebeek is in the same boat. In fact, back in 2014 he won his first and only MXGP round right here!

Also look out for Kemea Yamaha Official MX Team’s Valentin Guillod. He was the winner of the grand prix here in Loket last year, in the MX2 class, and also won here in the European Championship’s premier class, the EMX250 back in 2013.

As for the ‘Yellow’ guys, Team Suzuki World MXGP, Kevin Strijbos should be back this weekend, which is exciting for him as a two-time grand prix winner here. He will also be joined by Arminas Jasikonis, a young gun fresh out of Lithuania, who will be making his MXGP debut.

The numbers don’t lie. Red Bull KTM Factory Racing’s Jeffrey Herlings is as close as you’ll get to untouchable. He doesn’t throw it all on the line in qualifying, yet he has gone pole 9 times from 15 starts, he’s led a whopping 327 from 426 laps in the main events, he has won 23 from 24 races, and has topped the box at every single round. He now leads the championship by 169 points and looks well on his way to claiming his third MX2 world title. But, before you get too carried away and hand the crown to him, it is July, a month that has been the end of season for him in the last two years, both times due to freak accidents.

Jeff is hands down the fastest MX2 rider in the world right now and has already stated on Social Media that he will be making the jump to MXGP next year, so he deserves this title although lady luck has already came and given him a bop on the head, he broke his collar-bone in the summer break. It’s not yet confirmed if he will be racing or not, he has said that he will see a doctor this week for a final check up.

Monster Energy Kawasaki Racing Team’s Dylan Ferrandis is still the only rider to have beaten The Bullet in a race this year. Dylan has proved time after time that he can run the pace; he just needs to get a good start and keep it on two wheels. The same can be said for Team Suzuki World MX2’s Jeremy Seewer. After a seven round podium streak at the start of the season, Jeremy has only cracked the box once in the last five rounds. The young Swiss rider has the pace, he is just pushing ‘too’ hard at the moment, trying to find a way to stop Herlings’ dominance.

Seewer is currently second in the championship 25 points clear of Red Bull KTM Factory Racing’s Pauls Jonass who is doing his best to claw back those points and defend his silver vice-world champion crown.

HSF Logistics Motorsports Brian Bogers hit a bunch of career milestones at the FULLBACK MXGP of Lombardia-Italy with his best ever race finish and best ever overall finish. The Dutchman may have his work cut out for him this weekend with Loket being rock hard, although he can remain calm because the following weekend we will be in Lommel, the gnarliest sand track in the world, for the Fiat Professional MXGP of Belgium, and that place will suit him down to the ground!