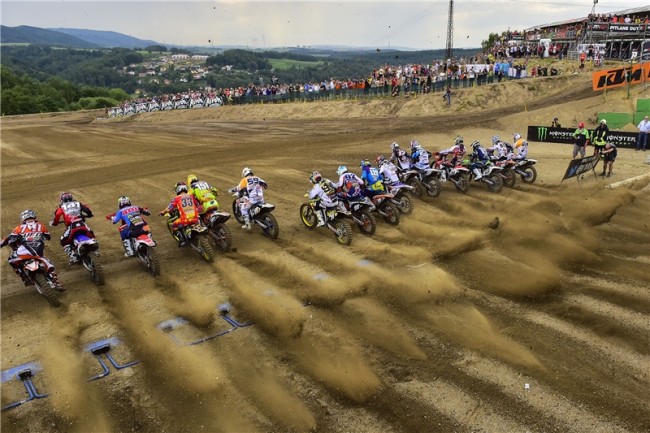 This weekend the thirteenth round of the FIM Motocross World Championship will take place at the beloved old-school style circuit of Loket in the Czech Republic. Even this far into the season, picking a box topper is next to impossible. In MX2 we can expect to see the return ofRed Bull KTM Factory Racing’s Jeffrey Herlings, although it is hard to say how his finger will hold up, while in MXGP devastating news has broken that Red Bull KTM Factory Racing’s Antonio Cairoli will sit this one out due to the injury he has sustained to his elbow.

On a brighter note, the FIM Women’s Motocross World Champion will be crowned this weekend in what is certain to be a battle to the finish between Team One One Four’s Livia Lancelot and Yamaha FontaMX Racing’s Kiara Fontanesi. At the moment, the 2008 WMX World Champion, Lancelot, leads the defending three-time world champion, Fontanesi, by a minuscule two points.

If any of the most recent rounds of MXGP are anything to go by, Yamaha Factory Racing Yamalube’s rookie Romain Febvre will be the solid bet for this weekend, especially with the track being that super slick and marble like clay he excels on. This weekend will be the number 461’s fourth outing with the coveted red plate.

Another rookie who is starting to turn heads is Rockstar Energy Suzuki Europe’s Glenn Coldenhoff. Coldenhoff suffered from a few minor set backs at the beginning of the season with a couple of broken toes making life a little harder than it needed to be. Nevertheless, the Dutchman is coming into his own, which he proved at the last round of MXGP in Latvia when he took his maiden MXGP overall.

Consistency was the goal for Team HRC’s Gautier Paulin this year, and it is one that seems to be going to plan as he goes into Loket only twenty-five points shy of Tony Cairoli, who is currently second in the championship. With Tony not racing, Paulin should move into second at the end of this weekend so his main mission will be to try and close the gap on fellow Frenchman, and championship leader, Romain Febvre.

Yamaha Factory Racing Yamalube’s Jeremy Van Horebeek took his first and only MXGP overall victory here in Loket last year, which should put him in good spirits for this weekend.

Rockstar Energy Suzuki World MXGP’s Kevin Strijbos is well overdue a MXGP win. The Belgian was runner-up last year and is showing good form at the moment. This could be his weekend.

Monster Energy DRT Kawasaki’s Max Anstie was absolutely untouchable at the last round of MX2 in Latvia. Although Loket is an entirely different track and compound to Kegums, Max has shown he’s got just as much skill on the hard pack with his impressive performance in the second race at the MXGP of Germany in Teutschenthal. If the Brit brings that same confidence and intensity he demonstrated in Latvia, there is no doubt he is in with a shot at the overall.

Red Bull KTM Factory Racing’s Pauls Jonass has been on the podium three times this year. While it is said that the Latvian prefers the softer terrain, he knows that to be a champion he needs to be well rounded, so he will give it all he’s got this weekend.

As for the dark horse, Wilvo Nestaan Husqvarna Factory Racing’s Harri Kullas, now is the time to back his surprise podium performance up.

Meanwhile Rockstar Energy Suzuki Europe’s Jeremy Seewer is always there lurking around the podium while his fellow Swiss Standing Construct Yamaha Yamalube’s Valentin Guillod will be pumped to be back on the hard pack and in his comfort zone.

Honda Gariboldi’s Tim Gajser is also a bit of a hard pack specialist and will be a threat this weekend, as willMonster Energy Kawasaki Racing Team’s Jordi Tixier who took his first ever MX2 overall victory here last year.