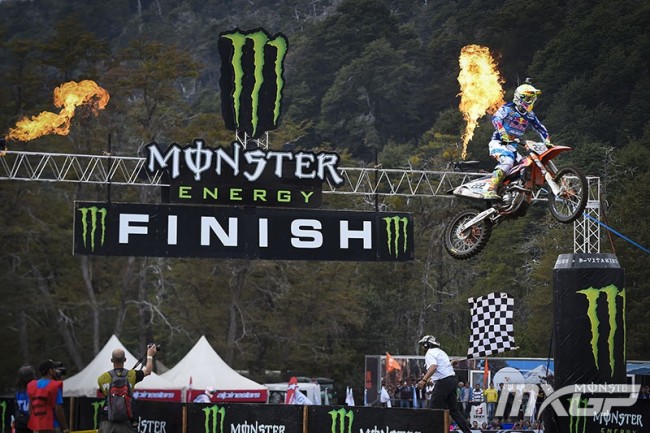 PIETRAMURATA (Trentino), 15 April 2015 – Italians are known for their passion. Yes, it is widely accepted that they do make the best pizza in the world. The same can be said for their pasta, and if you ask any of them, they’d probably vouch that they host the best motocross races in the world, too. Which is arguably true given Italy is home to our very own eight-time FIM Motocross World Champion Antonio Cairoli and every round of MXGP to have ever been hosted on Italian soil has seen thousands upon thousands of loyal and passionate fans flock to the venues ready to witness the best off-road motorsport series in the world, the FIM Motocross World Championship.

While the province of Trentino is so stunning and typically tranquil as the Dolomite mountains shadow the circuit, which lies in close proximity to Lake Garda, Pietramurata is going to be shaken up this weekend by the epicness that is bound to unfold for MXGP round four.

Also joining in on the bar bashing action, the first rounds of the European Championship EMX250, EMX125 and EMX150 will kick off, which is going to be something special indeed with both premier amateur classes EMX250 and EMX125 both full at 100 entries.

The plot is starting to thicken! As we head into this weekend there is still so much hype surrounding the multi-time American champ Monster Energy Kawasaki Racing Team’s Ryan Villopoto and this weekend’s home rider, the defending MXGP champion Red Bull KTM Factory Racing’s Antonio Cairoli. While bench racers continue to place their chips on these two, it just makes the victories sweeter for likes of Rockstar Energy Suzuki World MXGP’s Clement Desalle and Red Bull IceOne Husqvarna Factory Racing’s Max Nagl who have both proved to be solid threats for this seasons crown.

Starting with Desalle, as the MXGP championship leader, the Belgian bagged his first twenty-fiver at the last round in Argentina but is still looking for an overall victory. His momentum is solid at the moment; he is super positive and is riding fast and flawless.

Max Nagl is almost in the same boat. While the Red Bull IceOne Husqvarna Factory rider had an off round in Thailand we can’t forget he annihilated everyone at the season opener in Qatar and just authenticated his pace with his second grand prix overall in Argentina. Last year, here in Pietramurata, the German was also looking solid and managed to take home an impressive fourth overall.

Speaking of impressive, Team HRC’s Gautier Paulin’s performance at this circuit last year was incredible. A lot of GP21 fans are waiting to see the extremely flamboyant Frenchman stand on the box this year and given his speed last year, this might be his weekend.

And then there are the names on everybody’s lips, Ryan Villopoto and Antonio Cairoli. Starting with RV, it is going to be interesting to see how he handles his first European round of MXGP especially with the majority of the crowd rooting for Tony. We don’t doubt Ryan’s ability to adjust and take the bull by the horns; he has proven it at the last few rounds, not to mention on the occasions in which he has raced for team USA at the Monster Energy FIM Motocross of Nations. If the Kawasaki rider can challenge for the victory this weekend the atmosphere is going to be out of this world electric.

As for Tony, he has gone on record to say that the circuit here in Pietramurata is not one of his favorites, but what makes Tony such a great rider is he can accept bad days and just move forward. Although Tony has said this, we also know he loves his fans and he will do everything in his power to make them proud, therefore if Tony can win this weekend, it will not only be his first MXGP overall since MXGP of Belgium 2014, but it will be a special moment for everyone who has come out to cheer for the fun loving Italian.

In other awesome MXGP relative news, Red Bull KTM Factory Racing’s Tommy Searle has published on his social networks that he will make his return this weekend at MXGP of Trentino.

Pietramurata could be a circuit that suits the MX2 grand prix of Patagonia Argentina winner Monster Energy Kawasaki Racing’s Dylan Ferrandis. Being French, he is sure to have grown up on hard-pack circuits with plenty of elevation and it will be a treat for the spectators to see someone challenge The Bullet, Red Bull KTM Factory Racing’s Jeffrey Herlings.

Meanwhile Red Bull KTM Factory Racing’s young gun Pauls Jonass will be looking to rip yet another podium while his teammate Jeffrey will undoubtedly be lining up with a 1-1 on his mind.

We can also look forward to the return of Monster Energy Kawasaki’s Jordi Tixier who will definitely want to bounce back with a vengeance and celebrate with a bottle of bubbles, while it could be safe to say Standing Construct Yamaha Yamalube’s Valentin Guillod will be the one to watch as last years fair and square qualifying heat winner which he backed up with a solid 4 – 4 for fourth overall despite a few mistakes.

Fellow Standing Construct Yamaha Yamalube rider Julien Lieber can always be classed as a dark horse if he can keep the bike on two wheels while Rockstar Energy Suzuki Europe’s Jeremy Seewer will want another taste of life on the box.