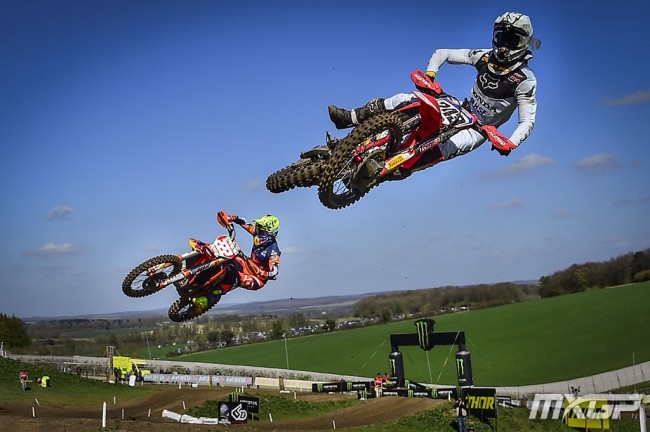 The postponement of the Grand Prix of Hong Kong and rescheduling of the first ever MXGP Chinese round left a vast five-week void in the 2019 calendar and a period that will soon be forgotten when the third of three consecutive races happens this weekend in France.

The extended break was a curious time in the FIM World Championship and occurred after only four rounds of eighteen in the series. For some riders like Monster Energy Kawasaki’s Clement Desalle, Monster Energy Yamaha’s Romain Febvre and HRC’s Calvin Vlaanderen it was a welcome respite in order to deal with injury issues or recovery programmes. For some others, like Rockstar Energy IceOne Husqvarna’s Pauls Jonass it provided much-needed space for further set-up and testing work on the FC450 in the Latvian’s rookie year.

The Grand Prix roster will not stop for longer than one week for the rest of the campaign up to the Motocross of Nations at the end of September.

When asked if MXGP could use a strategically placed sizable hiatus in future calendars the reaction from several of the current front-runners was conclusive.

“I don’t think it’s necessary to have that big of a break,” says Rockstar Energy Husqvarna’s title contender Thomas Kjer Olsen. “You can smooth it out a bit more and have just one weekend off, where you can still work on something. Four weekends is a lot in my eyes.”

“Such a long break is not good,” opines Red Bull KTM’s Tony Cairoli. “Of course it came because they cancelled some other races but it is not necessary. One week free is already enough to do some testing or whatever. Four weekends can also be a bit distracting to lose some training. Hopefully it won’t happen more and perhaps we can finish the season a bit earlier. If we are at home in September then great!”

“It kinda breaks the rhythm of training and racing,” says HRC’s Tim Gajser. “It was a challenge. For the future I don’t think it is necessary.”

Jonass was able to profit from the downtime. His work allowed the 22 year old to evolve on his riding and starts and post his debut MXGP podium result once the series resumed at Mantova. Jonass missed out on vital pre-season prep as he recovered from a knee injury. “That month was my time for testing and to really build up,” he claims. “In the first GPs I was just riding and riding to get the hours on the bike. I was working hard but it wasn’t to bring the intensity high, more to get time behind the bars. The intensity is so high in the MXGP class and it is hard to go that fast for 35 minutes.”

While the word ‘distraction’ was uttered more than once to describe the Grand Prix ‘pause’, it was clear that riders were able to use the breather for their own cause. Jonass actually advocates a proper summer break that could allow the same regenerative effect for athletes or teams struggling in a long calendar that passes quickly in a seven month blur.

“I think a one month break would be good in the middle,” he says. “Now the ball really starts rolling for us with the races. I think a break in the middle would be good and they do that in other sports or series. Most riders will have some sort of small injury that they need to heal.”