MXGP and MX2: Who impressed at the British MXGP? 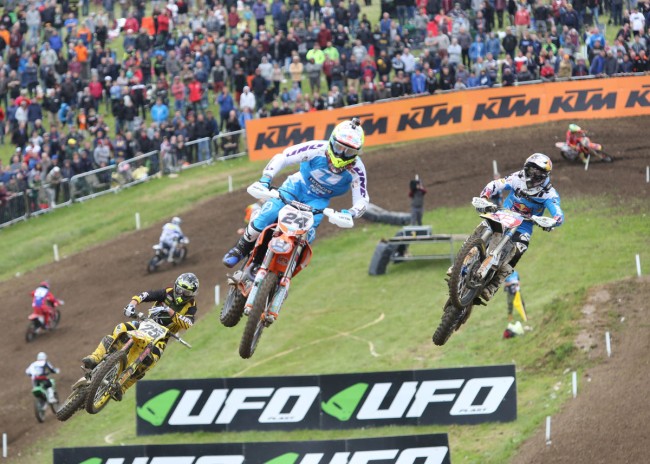 It was hard not to be impressed by Shaun Simpson this weekend. Shaun and his dad, Willie, built a brand new race bike in the week leading up to the GP ( can you imagine Cairoli or Nagl doing that?). They turned up with aforementioned bike in a privateer team and battled the very best in the world on their factory machines all weekend. Not only that but Simpson holeshot the second race and led the world at his home GP on the bike he built himself – that is pretty epic! Simpson hasn’t always been at the forefront of the British media hype but this weekend Simpson was the main man going into the event and he more than delivered in front of the home crowd.  Simpson is now seventh in the world and surely must have some factory teams considering his signature for 2016.

Hands up who expected Romain Febvre to win a GP moto in 2015 before the season! I certainly hadn’t predicted it, a top three possibly, a top five probably but Febvre has been a revelation and is getting faster every weekend. It all finally came together for the Frenchman in the second moto at Matterley as he block-passed Desalle to take the lead and the win. The week before be passed Cairoli for the lead and my have won that until he stalled, the Frenchman is intimidated by nobody. Febvre has put it all together now and will have even more confidence coming into his home GP this weekend! Don’t rule him out of the GP win there!

You have to be impressed with Antonio Cairoli. He threw away the Dutch GP, hurt his hand and then decided to switch to a 450 and hasn’t lost a GP since! Cairoli just controls races and doesn’t worry about winning by 30 seconds and he did it again in the first moto, when Desalle got close Cairoli simply upped his pace to let Desalle know he had him covered. Then in race two despite an early mistake Cairoli once again took no risks but did what he had to do to win the GP. The man has everything in his locker and is always one step ahead in his mind. I guess that’s what makes him the best in the world!

He broke his foot just five weeks before but Jeremy Van Horebeek was back racing at the British GP and was straight back in the top ten. But more crucial than his overall result was the Belgian’s speed. He was close to the top five in laptimes and practice times and stayed pretty strong in the races despite an obvious lack of bike time and race fitness. It has been a hard year for Van Horebeek but he showed consistency and speed at Matterley and once he gets his race fitness back he should be back to the form he had in 2014.

He’s pretty quiet and doesn’t get much press but Jeremy Seewer rode really well at Matterley Basin for sixth overall. Seewer is a bit of a steady eddy who works his way through the levels step by step. But he has a lot of talent and a nice smooth riding style on the factory Suzuki, and it’s all beginning to come together. He was battling all day close to the top five and but again wasn’t the centre of attention. Seewer has more in his locker for sure but this was a solid day for him in England and might just give him the confidence to push for the top five and get another podium.

You can’t not mention Valentin Guillod. The second moto was the best ride of his career and he took it to Jeffrey Herlings and even passed the Dutchman back when he went for the lead. Herlings admitted that he wasn’t used to being passed back and had to re-adjust. Guillod then upped his laptime everytime Herlings upped his pace. It was a brilliant demonstration of racing from the front under pressure but still being able to lift your pace when necessary. Guillod was the man of the meeting at the British GP.

Jeffrey Herlings might not have won the GP but you have to be impressed with his heart and desire. Struggling with a sore back all weekend, he just didn’t have the pace to win, until he wanted to win so bad halfway through the first moto that he forced himself to find the speed. He reeled in the leaders and dropped his lap times by two seconds posting the fastest lap of the race on the penultimate lap, with a lap time over a second quicker than everyone else! Quite how and where Herlings finds that speed when he needs it is mind boggling. And even though he didn’t win race two he forced Guillod to ride quicker than he ever has in his life and they both beat Tixier by 28 seconds such was the pace Herlings forced Guillod to ride at. Herlings has a lot of talent but his desire to win even when he isn’t at his best is maybe unmatched in motocross in this era and he showed it again at Matterley.

There is another fast Frenchman coming through! Benoit Paturel have been having a great season and scored another top ten overall in the UK. Paturel got injured in EMX2 last season but he is showing his talent in MX2 on the Kemea Yamaha team. He was running with the big guns again at Matterley Basin and showed he has the fight and talent to battle them every inch of the way. Paturel came into the season as a relative unknown to many but he is forcing his way into the minds of many fans with his riding this season and he did it again at the British GP with another top ten performance.