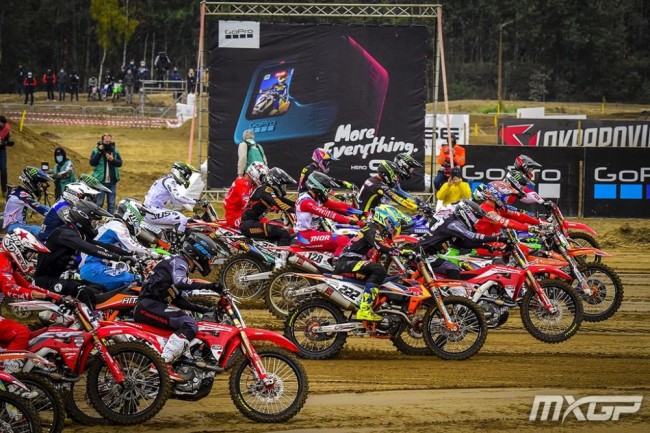 On the last day of the year we take a look back at a very unique 2020 MXGP season and some of the highs and the lows that stood out to us.

The season was completed – With all the carnage of Covid in 2020, a big round of applause must go to In Front Moto Racing, circuits and the teams for being able to put a season together at all. Three races in a week and a limited number of countries and tracks it may have been, but it worked well under the circumstances and the fans got to enjoy some great racing that, at one stage, looked like might not even happen after the first two races of the year.

Tim Gajser – What a season for Tim Gajser. He started the year on fire then had a dip with the new format but, when it really counted, Gajser found his form to dominate the end of the year with his standout performances coming at Lommel. His new found speed in the sand was phenomenal and he looked like a Dutch kid that had grown up in the stuff as he hopped skipped and jumped his way to victory and total control of the championship. Four world title at only 24 years old is seriously impressive.

Tom Vialle – This kid is a special talent. With only one year’s experience of GP racing, Vialle hardly put a foot wrong en route to his first ever world title. Brilliant technique, brilliant under pressure and now also brilliant in the deep sand, Vialle appears to have no weakness. We knew the Frenchman was good after his performances last season but he went to a level I didn’t expect this year, especially in terms of his coolness under the pressure of the world championship battle with Jago Geerts. This was a truly fantastic season for Vialle and KTM have uncovered another potential superstar. Both rider and team deserve a lot of credit for the last two seasons.

MXGP depth – Even with injuries the class was still deep! Some of the racing was fantastic and, even if the race at the front was a bit of a runaway the competition in the mid-pack was fierce and frenetic. At round one with almost all of the regulars racing the depth was phenomenal, even getting in the points was an achievement. Hopefully we can look forward to less injuries and even better racing in 2021.

Tony Cairoli – The season didn’t end how he would have liked with a broken nose and an on-going knee injury hampering his tenth world title ambition. but Cairoli was still in the hunt for most of the season and third overall despite riding injured at the age of 35 plus still winning GPs, the Italian still added to his remarkable legacy. He is still so determined as riding on with a broken nose for just a handful of points demonstrated and we should all enjoy the continued brilliance of one of the all-time greats in twilight of his amazing career.

Ben Watson – It was his final year in the MX2 class and after a tough start to the season Watson finally figured out the final piece of the puzzle and the humble but fantastically talented Brit started winning GPs! To see a British rider at the front and on the top step again is brilliant but it was also very pleasing to see Ben make good on that talent and deliver some cracking wins at the end of the year – and they came in style too after battling Vialle and Geerts for the wins. For British fans this has to be one of the highlights of the season, everybody in the UK who has seen his career develop through the ranks was pleased for likeable Watson who showed the rest of world what we knew he could do when everything clicks.

Injuries – People weren’t just getting injured this year they were unfortunately getting badly injured. To see what happened to Arminas Jasikonis was awful and Jeffrey Herlings lying motionless was hard to watch. Glenn Coldenhoff then also suffering a scary neck injury, and Pauls Jonass was out of the year after only two rounds with a broken back – it wasn’t a good season at all for injuries. Are the bikes too fast? The tracks to fast? It’s hard to say as it could just be one of those unlucky seasons. Let’s keep our fingers crossed that next year is more pain free for the riders.

Rutted tracks – There seems to be a strange compulsion to manufacture excess ruts, not only on corners but also on straights now. But does it really create better racing? If the ruts develop naturally in a corner it can, but when its disked and watered on purpose it becomes like slot car racing. Lines are limited and, if there are ruts on the straight into the corner, a rider can’t even set-up a pass because he can’t change line at any point into, around or out of the turn as he is locked in a rut throughout that entire section. Added to that if you get cross-rutted on a straight, it’s very, very dangerous. It all seems counter-productive to improve racing and safety. Flat turns shouldn’t be banned in motocross, needing throttle control and freedom to be creative and navigate your own line or set-up a pass mid-turn should also be part of the sport.

Retirements – It’s a shame to see Gautier Paulin and Clement Desalle leave the MXGP scene, they are both fantastic riders and add a lot to sport. Yes, money was a factor and when you are used to making big money but are then getting older and now with Covid, the teams aren’t investing in you as their number one rider anymore. A pay reduction was inevitable but it would have been nice to see these two brilliant riders on the gate for another year or two. However, both can be very proud of their GP careers and with over a decade each running at the front of the world championship scene they can step away with pride of what they accomplished at the highest level of the sport. They brought a lot of entertainment to many fans with their talent and very contrasting styles on the bike.