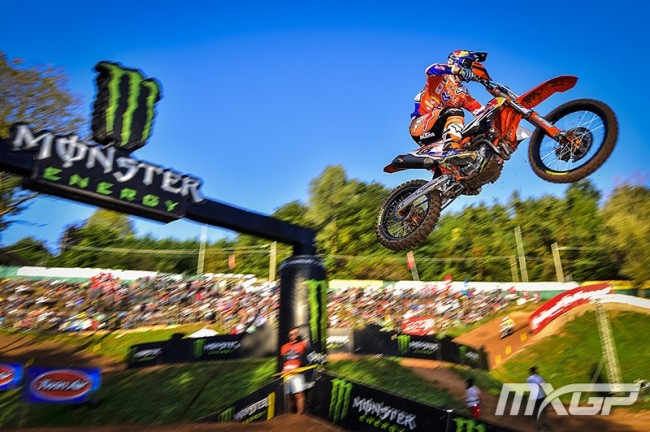 The Netherlands came agonisingly close to winning the Motocross Des Nations last year as only one point separated them and the winners, France.

Even though they didn’t win a year ago they were happy with a podium. It was the first time the country got on the podium at the Motocross Des Nations since 2004 when they were represented by Marc De Reuver, Erik Eggens and Bas Verhoeven.

Last year Jeffrey Herlings, Glenn Coldenhoff and Brian Bogers were so close to winning in Italy but it just wasn’t meant to be and the Netherlands had to be happy with second overall.

However, fast forward a year later and with the French and American team’s not quite as strong as last year, the Dutch team might be looking for more at this years event.

France aren’t quite as strong as they were in 2016 with injuries to Dylan Ferrandis and Benoit Paturel meaning they have decided to draft in Christophe Charlier for the MX2 slot and he’s been away from motocross for the year competing in Enduro! America on the other hand are sending three riders that will represent their country for the first time. However, Zach Osborne has competed in the event before for Puerto Rico. With Eli Tomac and Cooper Webb not available for selection they decided to draft in Thomas Covington and Cole Seely. Covington is familiar with the track due to racing the Grand Prix’s but it will all be new for Seely. Whilst it’s a strong team they aren’t coming into this year’s event as clear cut favourites.

The Dutch team are sending the same team as last year. Coldenhoff had a good Motocross Des Nations last year as he finished fourth overall in the MXGP class, if he can do something similar again this year that could be good enough.

Herlings was close to winning both of his moto’s last year but a small crash meant Jason Anderson pipped him to the MX2 and Open moto victory. Herlings will be hoping to win both of his races this year, if he does that the Netherlands could definitely win this years event. However, it won’t be easy for Herlings with the likes of Cairoli, Gajser and Febvre very strong in the hard pack conditions and Matterley Basin isn’t one of Herlings favourite tracks.

Last year was Brian Bogers second year participating the event for the Dutch team but it was the first time he participated in the MX2 class as he raced the MXGP for the Netherlands in 2015. Last year Bogers finished seventh overall in the MX2 class which was a solid result but that’s where they lost their points last year. Bogers should be stronger at this years event as the experience from last year should help him, if he can end up in the top five in the MX2 class that might just be enough to win the Des Nations for the Dutch team. It could be Bogers’ last ride in the MX2 class as he’s rumoured to be moving up to the MXGP class in 2018 so he will be looking to finish off his MX2 days in style.

Whilst they go in as the underdogs, no one should under-estimate the Dutch team because if everything clicks on the day they could just end up victorious.