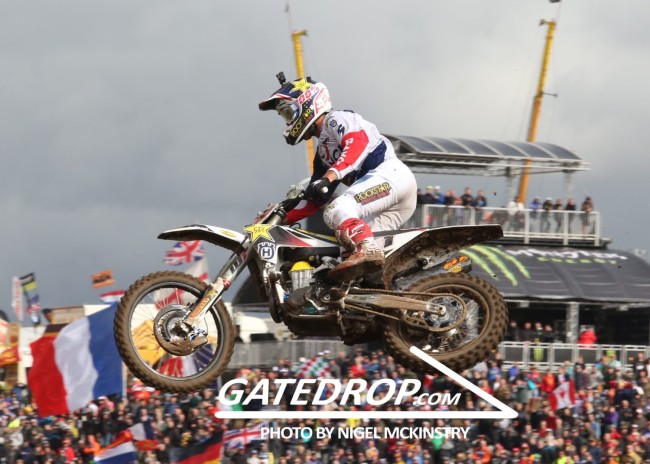 Max Anstie did it! He went 1-1 to the delight of his home fans. He holeshoted and along with Febvre they pulled away from Van Horebeek and Herlings. However Anstie washed out on the same jump Herlings crashed in race 2 and gifted Romain Febvre the lead. Febvre who was once again riding without goggles was riding well out front until vision became a problem. Anstie and Herlings who had now got into 3rd started closing in. With less then ten minutes to go Anstie passed the Frenchman to regain the lead to a huge roar of approval from the massive crowd. Herlings quickly passed Febvre and immediately Febvre point over to his pit crew for google just after the finish, he pitted for a fresh pair and still had a big gap over 4th placed Van Horebeek.

Everybody now held their breath to see what Herlings could do. He closed in but with one lap remaining Max Anstie held on to take a double moto victory in the biggest stage of them all!

France won the Nations by a huge 11 points. Despite Anstie’s heroic ride it wasn’t enough for Great Britain to oust the Netherlands out of second, but it was still a well celebrated podium finish, the first time since 1997 for the Brits.

USA event was summed up by the sight of Cole Seelys factory Honda with a collapsed rear shock for the second time in one day! 9th place for the Amercian won’t sit well, they will be already be planning their revenge at next year’s event in Redbud.

Team Ireland finished 15th with 22nd and 28th in the final moto.