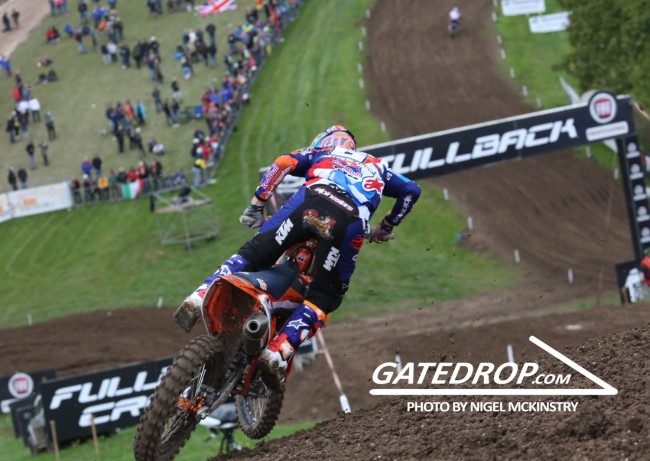 Herlings and Febvre started 1 and 2 and quickly started pulling clear of the rest of the pack. Herlings washed out on the back side of a jump and Febvre sailed by into the lead. However the Dutchman was able to remount quickly and a few laps later he put on a charge to catch and pass Febvre Who lost his goggles.

Seewer crashed the first lap then had to pull into pits half way through the race for goggles. Keeping your goggles seemed to be a big struggle as most riders were riding bared faced the last ten minutes.

Hunter Lawrence was again impressive in Mx2 coming from about 20th to 5th only to crash, then put in another charge to repass Osborne, Charlier who was having a brilliant race, his teammate Gibbs and Lupino to reach 3rd spot. However half a lap late he binned it once again remounting in the position he finished 8th. Despite the two spills this was a very impressive performance from Hunter which earned him the Mx2 class overall.

USA’s day didn’t get any better as Covington fell two laps in, then again a couple of laps later. 22nd was all the young American could salvage. Zach Osborne rode steady and did well in the end to fight to 3rd place but the mighty team USA look to be out of it as we head to the final moto.

Britain’s Dean Wilson started just outside the top ten and finished 7th with Tommy Searle having to recover from another horrendous start to 15th. They still have a shot at the podium but surely the win is out of the question now.

Ireland’s rider both suffered from terrible starts Graeme managing to move up to 21st and Martin Barr, who was having to ride back to back races came home in 33rd. Good news for Ireland is they are 12th in the Nations stands.

France have a very handy 5 point lead over the Netherlands going into the final race as Chalier rode fantastically in the rutty muddy conditions to finish second placed mx2 rider and 6th in the race. Febvre topped that off with an easy ride to 2nd place, although he could have sore eyes having rode 20 minutes with out goggles!