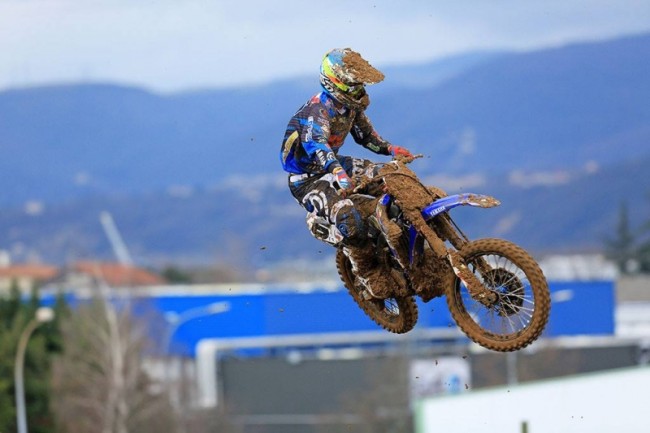 One rider I expect to do well this year is French rider Benoit Paturel who has signed for the Kemea Yamaha squad for the 2015 season. A lot of people might not have heard of him before this year but unfortunately for him he has had a lot of injuries so has gone quite unnoticed.  I believe he has a lot of potential, in 2012 he did a few rounds of the emx250 championship and did pretty well. At the last round in Faenza he was second overall behind Mel Pocock who was pretty unstoppable that season. Benoit also did his first mx2 race that year as he did the Swedish Grand Prix and finished tenth in the second moto just behind Glenn Coldenhoff and beat riders such as Guillod, Tonus, Petrov, Febrve and Butron in that moto, not bad for a sixteen year old and at his first ever GP so that shows he’s not intimidated by bigger names.

In 2013 he decided to concentrate on the emx250 championship with Bud Husqvarna which wasn’t the best bike in the world then, he managed 10th in the championship but had quite a few DNF’s. He was going to stay with BUD in 2014 and ride a Kawasaki in the emx250 championship but unfortunately he got injured and missed the season. Kemea Yamaha decided to sign him for the 2015 season and he will be working closely with Jacky Vimond and Marnicq Bervoets who I believe will help turn him into a top rider. The pre-season races have been going well for Benoit and I believe we will see him getting plenty of top 10 results this season!

After narrowly missing out on the emx250 title last year Brian Bogers will move up and compete in the MX2 class in 2015. He will stay with the HSF Logistics KTM team as they will now focus on the MX2 world championship (Robert Justs and Calvin Vlaanderen will also ride for them); it is always nice to see new teams in the series. Brian has been doing wildcard GP’s since he was sixteen so he knows what to expect and now at eighteen he will focus on the full mx2 championship.

For being Dutch Brian is a pretty versatile rider as he is good on hard pack and sandy conditions, this year will be a learning year for him but I think he can get some top ten finishes in moto’s. He started to work with John Van Den Berk last year and I believe he will have helped him a lot over pre-season so watch out for this kid in Qatar!

Jens Getteman has had a rotten few years with bad luck and getting injured. In 2012 he got a ride with Standing Construct Suzuki to ride mx2 for what was supposed to be a learning year. He had some decent GP’s that year however; I was surprised when he switched to the mxgp class for 2013 when Honda mx24 signed him.  I can understand why he would have wanted to move to that class as he is a big guy and probably move suited to the 450 machine but I feel that move was too early for him because the depth of fast riders in that class is crazy.

To be fair to Jens he had two years plagued with injury so he never really got to show us what he could do in mxgp. In 2015 Jens will drop down to the MX2 class again to race for JTech Honda, I feel this is the perfect move for him as he should get a lot of top ten results and could even be in the top five on a good day. He should start getting good results again which will give him the confidence and make him more ready for mxgp when the time is right for him to move up again, I just hope he can stay fit for the season.

For the beginning of the 2014 season Vsevolod Brylyakov didn’t even have a GP ride but JTech Honda weren’t having the best of seasons and decided to give the Russian kid a chance. Maxime Desprey was having an underwhelming season so they give Vsevolod a bike for the French GP and he showed promising speed, he even beat desprey in the first moto. After that GP they decided to give him the bike for the rest of the season and he did well, his best result was a ninth in the second moto in Sweden which shows sign that the Russian could be one to watch this year.

Gariboldi signed Vsevolod for the 2013 season so they saw talent in him but let him go for the 2014 season when HRC became more involved with the team. Going into the 2015 season he has had a full pre-season to prepare so he should be even quicker this year as he was thrown into the deep end last year riding the French GP without any real preparation on the bike so I think he could surprise people this year!

Damon Graulus goes into the 2015 with a new team as he has signed to be Benoit Paturel’s team mate at Kemea Yamaha. Damon rode for Standing Construct KTM last year and he showed some good speed in what was a learning year for him after spending a few years in the European championship.

His best finish of the season was a seventh place finish in the second moto at the Spanish GP but unfortunately he picked up an injury before Loket so that finished his season. Standing Construct were impressed so give him a new deal to stay with the team but when Leiber became available they decided to sign him instead but I believe Damon will have a good season on board the Yamaha, he certainly has a point to prove!