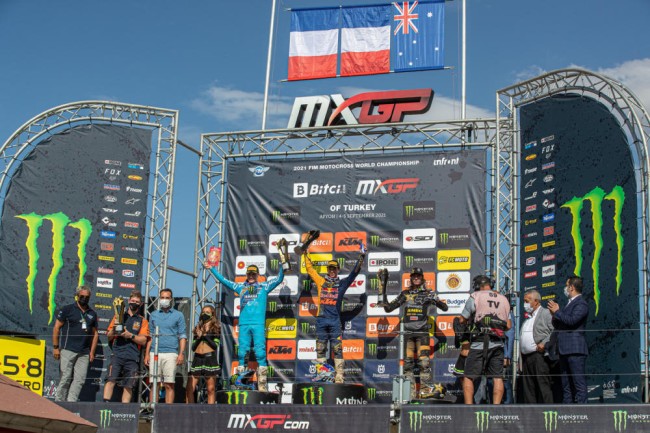 Tom Vialle: “It’s really good to be back on top after the injury. The summer break was good because I could train and work on the bike also and now to be back is really good. I was happy in the morning to take pole position because it’s not a lot of times that I’ve taken the pole position which was pretty nice. I took two good starts and in the second race I pushed to come back but it was difficult to pass as there were not so many lines and Maxime was riding pretty good. I tried to give my best. For sure to win here is good and to stay here in Turkey is nice, I like the track and it will be a good race on Wednesday”.

Maxime Renaux: “Was two completely different races today. I took two good stars, but in the first race I went too wide which allowed the other riders on the inside, so I had to fight my way through the pack and come back from eighth to fourth. I was riding a little bit stiff and was not happy with the riding. For the second race we changed some things on the bike, I was feeling much more comfortable and took the holeshot and then had the perfect race. For Wednesday I will look to improve on my lap times because it’s important to be on the inside here. I take it race by race, I want to win all the races if I can but it’s pretty hard and I need to think about the championship. I’m also trying to be more clever than before and avoid making stupid mistakes and keep control of the championship”.

Jed Beaton: “It was a pretty good day for me. Never pulled the holeshot but in the first race I came close which was good, but then made a small mistake which allowed the KTM guys to pass and then Tom was going quite fast and I got a little bit of arm pump so I went back a little bit but then the last few laps of the race I felt like I was riding good again and try to take that into the second race. I got another good start but lost a bit of rhythm in the first few laps, the guys pulled away but I was just trying to manage my own race and then had Mattia on my back which added some pressure, but overall it was a good consistent day for me to put together two good races which has been a struggle for me for the last couple of races and it’s a good step in the right direction. It’s good to recharge the batteries as the last four rounds were pretty tough so it took a lot of energy out of us and the little break was nice for everyone”.