MX2 & MXGP: Who impressed in Spain? 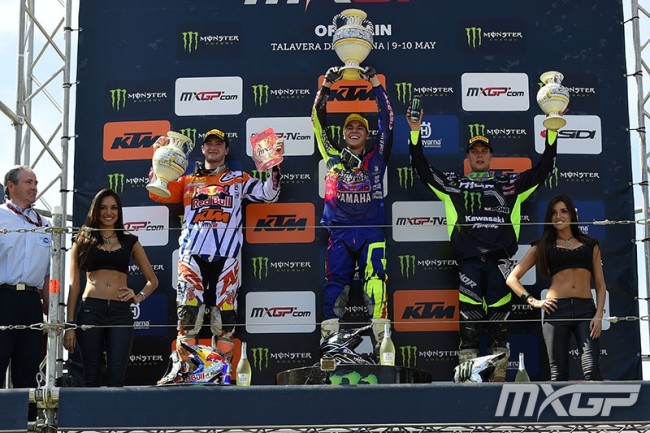 The MX2 and MXGP produced some great racing in Spain and there were some surprises, especially in the MX2 class. Gatedrop take a look at the riders that impressed over the course of the weekend.

History was made in the MX2 class in Spain as Valentin Guillod won his first ever moto and GP overall. It was an impressive display from the Swiss rider, he has done plenty of testing with the Standing Construct Yamaha and it looks as though it is starting to pay off and the bike is up to speed. In the first moto he had a disastrous start back in the eleventh but worked hard to finish the moto in sixth – a good salvage ride. He got a much better start in the second moto as he started in second and was all over Ferrandis. Valentin had some unique lines that no one else was really using and looked like he was oozing confidence. He made the pass on Dylan with a few laps to go to take a brilliant victory and his first overall win in MX2, he moves up to MXGP next year so that result will surely help him get a good ride!

Max Anstie rode brilliant in the first moto and kept Herlings honest, it actually looked like at one stage he could win it and beat Herlings straight up but it just wasn’t meant to be. A second place finish was great for Max though. Unfortunately, he had a terrible start in the second moto as he started in sixteenth but he rode hard and ended up in ninth, a better start and he would have had the speed for an overall podium. It looks as though Steve Dixon has got that Kawasaki sorted out and this is the best we have seen Max ride since he decided to come to the GP’s. Next up is Max’s home GP, he will be motivated to get a good result and certainly has the speed!

It was a frustrating weekend for Tim Gajser as he had a terrible start in the first moto that spoilt his weekend but his speed was good. He started in nineteenth but worked hard and finished in eleventh place, speed is not the problem for Tim but he really needs to start getting the HRC Honda out of the gate better! Fortunately, he got a better start in the second moto, not that it could get much worse, but he came from seventh and snatched second on the last lap from Ferrandis. Tim was probably the fastest in the second moto but starting seventh makes it hard to win and in fact, he rode very well to get second.

A shout out to Brent Van Doninck who had his career best finish in the first moto with a seventh place, he was flying! Unfortunately, a first corner crash in the second moto affected his overall result but, good speed from the Belgian!

There was a lot of debate about Antonio Cairoli’s decision to swap his 350 KTM machine for the 450, Tony was searching for his first GP overall since Belgium last year. He feels that the tracks are faster this year so he was losing out on his 350 and that is why he choose to swap to the 450 machine. Saturday, in truth, went really well for Tony as he was fastest in both free and timed practice as well as winning the qualifying heat. The decision to swap to the 450 was looking good. In the first moto he had a good start but Desalle and Nagl were able to pull away from him but it looked as though his sore hand was giving him trouble in the last ten minutes. In the second moto he got the holeshot and looked more comfortable, Febvre passed him but after he stalled, Cairoli then took the win. It meant Cairoli won his first GP since Belgium last year and he did it on his first GP on his 450 – that’s a big GP win. I expect Cairoli to get faster as he gets used to the power of the 450 and he could start cutting down Nagl’s points lead soon.

MXGP rookie, Romain Febvre rode brilliant all weekend and took his first overall podium in the class. The conditions really suited the Frenchman as he attacked the circuit brilliantly, a fourth and a second meant he got a well-deserved podium. He stalled while leading the second moto which let Cairoli get back in front, it’s a shame he stalled because otherwise he could have won it! I predicted that Romain would win at least one moto this season, the wait goes on but that will give him the confidence. Every year a lot of people seem to doubt the speed of the riders in the MX2 class but Romain is proving that there is nothing wrong with the speed of the riders in the class. It will be interesting to see if Jordi Tixier and Valentin Guillod run this kind of speed when they move up into mxgp next year. 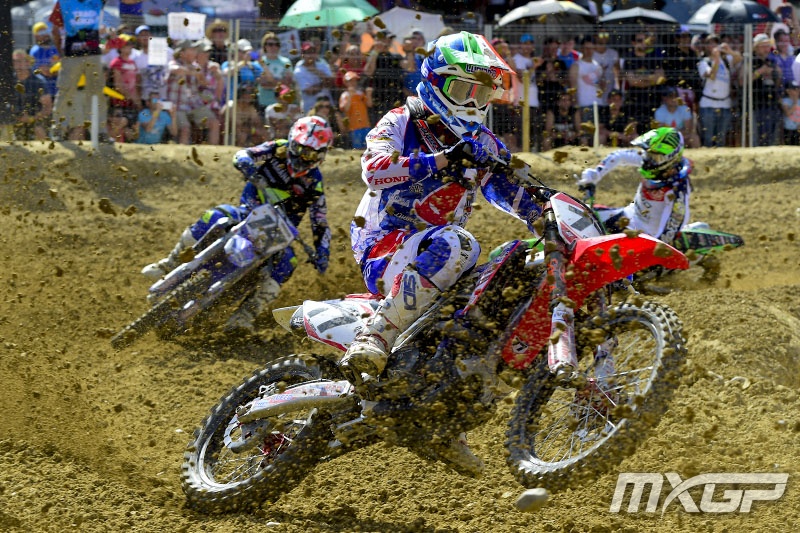 It was a good weekend for BUD Kawasaki’s, Xavier Boog as he finished ninth overall. I was surprised that he didn’t get a full time GP ride this year as he still has plenty to offer, in my opinion. He was solid this weekend with a twelfth and a tenth; if he keeps producing these kind of results he will certainly get a good ride for next year!

It hasn’t been a good start to the season for Alessandro Lupino but he did well this weekend as he ended up tenth overall, definitely going in the right direction with the new Assomotor Honda. Alessandro is a part time police man so it must be hard trying to do both! He’s a good rider and I believe people forget how good he is, It was good to see him have a good weekend and a few more results like that will help his confidence and hopefully he can keep improving!