MX2 & MXGP: Who impressed in Mantova? 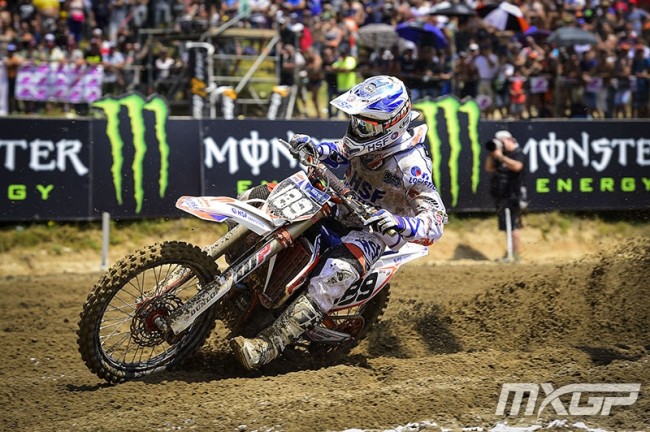 Round twelve of the MX2 and MXGP World Championship headed to Italy at the brilliant sandy, Mantova Circuit.  This was the second GP Italian fans got to enjoy after also hosting the eighth round at Trentino. We will take a look at the riders that impressed during the course of the weekend.

It’s been a very long time coming but finally, Brian Bogers landed himself an overall podium at Mantova. Brian rode brilliant on his HSF Logistics KTM to finish second and third in the moto’s for second overall. There is no doubting this guy has talent but in all honesty I’m surprised it took him so long to get a podium in the class, he has the speed! On the podium he laughed at the thought of getting a podium, he needs to believe in himself more and he could be a regular visitor to the podium! I’d be surprised if a few factory teams weren’t considering the Dutch rider for the 2017 season, he could be a perfect addition for Yamaha or Kawasaki and he deserves a chance at a factory ride.

It hasn’t been a great season for Thomas Covington so far mostly thanks to injuries. However, he is back and getting closer to 100%. Mantova went really well for the American. He good a brilliant start in the first moto and led the first two laps before crossing the line in fourth position.  However, in the second moto he didn’t get a good start as he found himself in fourteenth in the first lap! He dug deep and came back to fifth, that was a better ride than the first moto! He only missed the overall podium by a point after Ferrandis made a pass on the last lap but it’s a step in the right direction. He will want to stand on the podium before the end of the season, he was fast in Assen last year so that is one place he could possibly do it but it won’t be easy!

After Benoit Paturel’s big crash at Matterley Basin, he wasn’t able to ride during the week. However, it didn’t seem to hinder the Kemea rider all that much as that sort of track isn’t his preferred terrain. He put in two solid moto’s to finish seventh and fourth to end up sixth overall. A good weekend considering he had no bike time after Matterley Basin. He also moved back past Tonkov for fourth place in the championship, he is the leading Yamaha rider in the MX2 class again.

Another good GP for Conrad Mewse in the books as he continues to learn riding with the fastest 250 riders in the world. He didn’t set the world on fire in the first moto only finishing in sixteenth place. However, he was much improved in moto two and ended up ninth which meant he finished up tenth overall. He is quietly going about his business and continues to improve, he will be one to watch in 2017.

Just how awesome is Tim Gajser? He continues to look better and better on the 450 every single week. The most impressive thing about the Slovenian rider is when he gets into the lead he doesn’t go crazy and try to win by thirty-seconds, he does exactly what Cairoli used to do and control the lead. In the first moto Gajser won by 4.4 seconds at the chequered flag but never looked troubled.  The second moto was a different story as he had to deal with the threat of eight times world championship, Antonio Cairoli. He played it very well as he would have a go at Cairoli, then drop back and try again, that happened multiple times in the second moto. It was good that he didn’t rush and just took his time. Another fifty points in the bag and the 100% podium success rate keeps on going. An amazing season for the Gariboldi Honda rider.

In front of his home crowd at his home GP, Antonio Cairoli put on a great show in the second moto.  He got the holeshot and put everything he had into keeping Gajser behind him. Gajser even passed him but Cairoli didn’t like it and passed him back! He dealt with extreme pressure for eleven laps but he just couldn’t hold on at the front any longer with his injured wrist. He ended up finishing third in the moto but it was good to see him showing the fight he has and putting it to Gajser. There will be no one happier than Cairoli with the break before the Loket GP. Hopefully he will be close to 100% fit for that GP so we can see him battling at the front again.

I was really impressed with Gautier Paulin at the weekend. I feel like that is the best he has ridden in a long long time and he still isn’t 100% so that is encouraging for the French man. He finished a good third in the first moto after passing Nagl with three laps to go. However, he impressed me the most in the second moto. Gajser and Cairoli were setting a high pace at the front and Paulin was able to keep it at seven seconds the majority of the race, he was going the same speed! He then took advantage of Cairoli to finish second and for second overall. This is definitely a step in the right direction, can he win a GP before the end of the year? It remains to be seen..

A good GP for Kawasaki’s Clement Desalle as he is back on the GP podium! It is great to see the Belgian back on the podium after all the bad luck with injuries he has had. Without the bad injuries he would have been battling for the title last year and this year. Now with a break before Loket he can get his head down and put in some hard work. He will also be looking to win a GP before the end of the year to give him confidence heading into the 2017 season. He should be really strong as Loket for round thirteen of the series.