MX2 & MXGP: Who impressed in Maggiora? 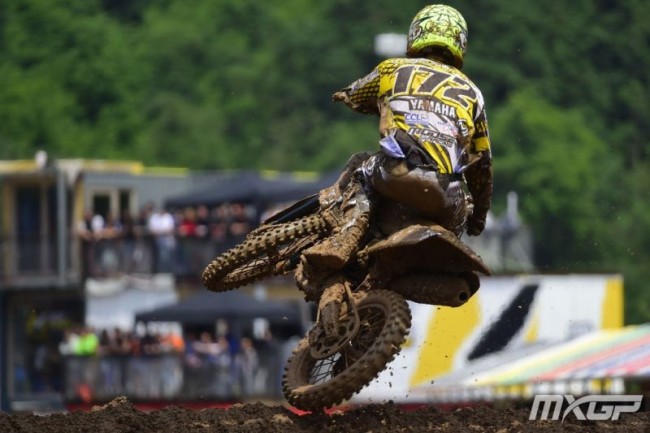 Even though the heavy rain over night in Italy meant that the track was quite wet, it still provided some great racing! Gatedrop take a look at the riders that impressed in Italy in the MX2 and MXGP classes!

It was the second overall MX2 GP win for Tim Gajser this weekend! He got two solid starts and looked at home in the tricky conditions. In the first moto the conditions were really bad with the mud so a good start was vital. Tim started fourth and passed Jeremy Seewer for third and that is where he finished in the race. In the second moto the track was much drier than in the first moto and the riders could push more. Tim was in second and actually caught Jeffrey – it looked like he could make the pass. However, he had to throw his goggles away and then he settled for second to give him his second overall GP win. How many more can Tim win before the end of the year? He is going to be a big threat for the championship in 2016!

It was also the second career podium for Jeremy Seewer on-board his Rockstar Energy Suzuki. Jeremy actually rode the ADAC German championship last weekend and beat Glenn Coldenhoff in both the races on his 250, it looks as though this has given him the confidence he needed! A fourth and a third in Italy meant he ended up third overall on the day. Jeremy has stepped it up this year and it will be interesting to see how many more podiums he can get before the end of the season.

After a crash at Matterly Basin it looked as though that Brent Van Doninck’s season might be over as he damaged his knee. He needs to get surgery but the doctor has said that it isn’t needed urgently so Brent is going to finish the season and then have the surgery. Brent recorded his career best MX2 GP this weekend with a fifth and a seventh which meant he ended up fifth overall. Brent has been more known for his good sand riding but to get the kind of results he has been this season and this weekend is very impressive. I am pretty sure a number of teams will be looking to sign Brent for the 2016 season!

Samuele Bernardini had the best GP of his life! Where did that speed come from? Before this weekend he didn’t have one championship point to his name. However, the Italian was impressive this weekend in front of his home fans. The conditions suited him perfectly and he ended up tenth and ninth in the moto’s to end up eleventh overall. I am sure he wasn’t expecting that before this weekend! I remember when he rode the EMX125 class and was battling with guys like Tim Gajser, he definitely was talented! He has had a tough few years and struggling for confidence but that kind of result could help him turn his career around.

A shout out to Alexander Tonkov who was impressive in the first moto as he won his first ever moto in MX2. However, he ruined his chances of the overall victory in the second moto by attempting an aggressive pass on Jonass which took them both out.

A dodgy wrist has been giving Kevin Strijbos trouble all season and he has missed a handful of GP’s. His first GP back and he wins a moto as well as getting an overall podium, who would have thought that? It was a very impressive display from the Belgian, it is just a real shame he can’t seem to stay fit for an entire season – speed isn’t a problem for him. Kevin will want to be selected for Belgium for the Nations team so if he can stay fit and keep riding like that, he could certainly get his wish!

What a rider Antonio Cairoli is, after a crash in the qualification heat on Saturday it looked like his season was over. Antonio confirmed that he has fractured his hand in two places as well as a damaged elbow. He showed true guts and rode like a champion, a brilliant seventh place in the first moto meant he actually gained points on Nagl, no one would have predicted that! Tony said before the second moto that it was the hardest race of his life, the second moto probably toped that as the pain was just too much and Tony cruised around and ended up eighteenth. It has been a frustrating season for Cairoli as he had a knee injury at the start of the season which meant he wasn’t able to train like he wanted. The crashes in Holland and now Italy have set him back even more, he hasn’t been 100% fit the entire season! Tony will need to rest before Germany and do his best to get through that weekend but will need to quickly get 100% fitness back if he is going to win his ninth world title!

This is the weekend that Romain Febvre has become a genuine title contender. His second MXGP overall win and he has gained points on both Nagl and Cairoli. As Tony will be riding injured in Germany you would think Romain will move into second in the championship after Germany. He is currently thirty-eight points behind Nagl – it was over fifty not too long ago. With the form Romain is showing I can see him winning plenty more before the end of the season so it will be interesting to see if he can keep cutting down the points.

It was a good start to the season for Todd Waters but as the series has come back to Europe he hasn’t showed the same results, until today! He looked comfortable on the track and admitted that it was good fun, he took his first overall MXGP podium! A brilliant achievement for the Aussie, he keeps learning all the time and it is satisfying to see he is improving as a rider by racing the World Championship! Todd is now eighth in the world championship, he can be pleased with that and the improvements he has made this year.

At one stage it looked as though that David Philippaerts might actually win his home GP! He rode brilliant all weekend at his home GP and only missed out on the overall podium because Todd had the better second moto. It was great to see DP in the form as it must not be easy riding for his own team! Also, a shout out to Shaun Simpson as he put two strong moto’s together to finish sixth overall. Shaun is one rider that could be on many teams shopping lists for next year as he keeps putting in solid moto’s – the perfect second rider in a factory team. Kawasaki Racing Team have already showed an interest in him so it will be interesting to see if he ends up there.