MX2 & MXGP: Who impressed in Germany? 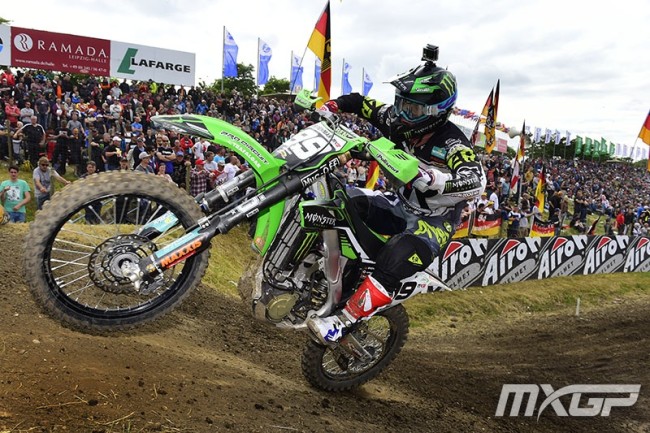 MXGP and MX2 headed to Teutschenthal for the tenth round of the championships and both classes have entertained with some great racing this season. Gatedrop will take a look at the riders that impressed in the classes over the course of the weekend.

Before the start of the season many people expected Tim Gajser to be the main man in the class after Herlings. Tim had some problems at the start of the season but he won his third GP of the season this weekend, he is definitely living up to the high expectations. Tim has now got himself into second place in the championship, if he can finish the season there it will have been the perfect season for the Slovenian. To think that KTM had Gajser a few years ago but they let him go – huge mistake. Next year is going to be a big year for him and even if Herlings does stay down he will challenge Herlings for the title – he has the belief he can beat him now.

There is no doubt that Max Anstie has the speed to win races but it has been an up and down season for him, mostly down to bad starts. This weekend went great for Max although the first moto was the story of his season, a bad start but salvaged an eighth. The second moto was perfect as he got the holeshot and led every lap of the race. It was a big moto for Max as he was able to pull away from Gajser and win comfortably in the end. It meant Max finished second overall, this will be great for his confidence and he could definitely get a lot more podiums before the end of the season.

The first three GP’s went really well for Julien Lieber but it has been a frustrating season since then. However, finally this weekend he was able to put two good moto’s together – a fifth and a fourth. That is a lot more like it for the Belgian, he has the talent to be a regular top five finisher but it just hasn’t clicked yet. This will be good for his confidence and he can build from this. With Valentin Guillod moving up to MXGP next year, Julien will be the lead rider in the team so he will need to perform next year – he will have high expectations.

It was an impressive weekend for Henri Jacobi at his home GP. Henri rode EMX250 last year as a rookie, had some good and bad moto’s in what was an up and down season for him. He got picked to ride for Germany at the nations and decided to ride MX2 as a rookie this year. He is improving a lot and riding a lot better this year than what he did last year in EMX250. He finished tenth in both moto’s which is the first time he has broken into the top ten in MX2 – an impressive weekend for him in front of his home crowd.

Another GP win for Romain Febvre – that’s now three in a row. The guy is on fire, I predicted last week that he could overtake Cairoli in the standings after Germany. After Nagl’s injury he actually has the red plate now, don’t try and predict anything in MXGP this year! A rookie now has the red plate and it’s not the rookie everyone thought it would have been – a great achievement for the French man. Sweden is next up in the calendar and Cairoli doesn’t particularly like that track, will Romain be able to gain even more points?

It has to be said that Gautier Paulin still doesn’t look all that comfortable on the Honda. However, he was still able to win the second moto and get back on the overall podium. An encouraging weekend for Gautier and he should only improve as he keeps getting used to the Honda. To think he has already won three moto’s this year while still adjusting, imagine how good he will be when he gels with the bike! HRC Honda and Gautier are putting the work in so it might not be long until he wins again.

Probably the most impressive rider at the weekend was Dean Ferris. This year he has pretty much been a tenth to fifteenth place guy but he likes Teutschenthal! It is thought he is now running Cairoli’s old 350 engine and that seems to be doing the trick. He had two brilliant starts and hung it out with the front guys as long as he could which was impressive. Dean is also battling with a really bad sickness at the moment as well so he isn’t 100% fit. The result in Germany will help Dean and could turn his season around!

24MX Honda rider, Christophe Charlier is starting to find some mid-season form. Christophe won a Belgian championship round a few weeks ago beating top names like Jeremy Van Horebeek and Kevin Strijbos, this seems to have given him the confidence he needed. Christophe finished up in tenth and eighth for eighth overall. That is his best ride so far this campaign which is encouraging. He is starting to find the form he needs and I expect him to keep getting stronger in the MXGP class.

A shout out to Jeremy Van Horebeek who is starting to get his speed back after an injury earlier in the season. Jeremy crashed in the second moto trying to get past Waters but came back from eleventh to finish fourth and only six seconds behind the race winner! He threw a podium away by crashing and a potential race win but I expect him to be back on the podium soon!