MX2 & MXGP: Who impressed in France? 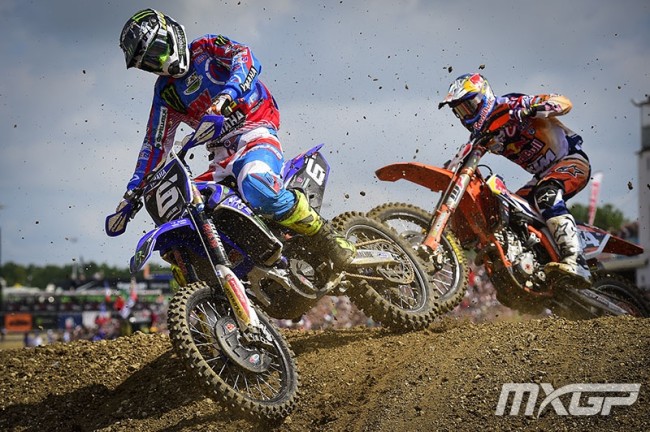 It’s hard to believe we are already past the half way mark in the World Championship. The brilliant French circuit, Saint Jean d’Angely hosted the tenth round of the series. We take a look at the riders that impressed during the course of the weekend.

What a show Benoit Paturel put on for his home crowd! After finishing on the podium in Spain he was hoping to do the same again in front of his home fans and he didn’t disappoint. In the first race he led for fifteen laps and it looked like he would win the moto but he just couldn’t hold off Herlings. After a slow start to the season Benoit is now starting to ride at the level we expected him too, he is a great hard pack rider. Benoit now sits fourth in the championship in what is a great season for the Kemea Yamaha rider, he will love the Matterley Basin track that is next on the calendar. Don’t be too shocked to see him get his third podium in a row.

A good weekend for Jeremy Seewer as he returned back to podium with a third overall. His speed has been great this year but he has suffered from some bad luck and crashes during the last two GP’s. I am sure he is relieved to get back on the podium again. In the second moto it was great watching Seewer, Paturel and Jonass battle for third position – they will be battling regularly in the 2017 season and it could be the championship battle everyone could be talking about next year.

Big congratulations to Jeffrey Herlings who is now the third most successful GP rider ever as he won his fifty-seventh GP win and over took Joel Smets. At just twenty-one years old that is an incredible achievement, he is well on the way to smashing Stefan Everts one hundred GP wins. To put what Herlings has done into perspective, I am a young journalist at just twenty-one years old but older than Herlings and he has fifty-seven GP wins! Will anyone be able to Herlings at Matterley Basin? British fans will be hoping that Anstie can put on a good show for his home crowd.

Tim Gajser and Romain Febvre were simply incredible at the French GP. To pull away from Cairoli in the first moto and beat him by thirty seconds is just astonishing. They give other riders a riding lesson as they keep raising the level. The first moto was an intense battle between the two and in all honestly neither deserved to lose that moto but Gajser just about won from the determined Frenchman with 0.6 seconds in it at the line. In the second moto Febvre was pumped up from the beginning to get the job done for his home fans and he did just that! Gajser rode a smart race and decided to settle for second. Consistency wins you title’s and Gajser keeps up his 100% podium success rate. Twenty-four points separate them heading into the eleventh round at Matterley Basin – talk about an exciting championship battle!

It was a great day for HRC Honda with two riders on the podium. Evgeny Bobryshev rode great for third overall finishing third and fourth in the moto’s for third overall. We are starting to see Bobby ride like he did at the start of the season again and it’s impressive. However, he still has a lot of work to do if he wants to run with Febvre and Gajser, even Bobby was surprised by their speed in the second moto, he simply couldn’t follow! However, a good weekend for the big Russian and he closes the gap to Nagl in the fight for fourth in the series.

As every week and every GP passes Clement Desalle is getting stronger and stronger. A fifth overall is a big step in the right direction, you can still tell he is lacking bike time. I believe Desalle has the speed to run with Gajser and Febvre at the front once he gets the required bike time in. Will he be able to win a GP or two before the end of the season? Don’t be surprised to see it happening!

A lot was expected of Glenn Coldenhoff this year moving to the factory Red Bull KTM squad but since Qatar he hasn’t been riding like he can. However, France was a big improvement for the Dutch rider finishing sixth overall. Glenn has the talent to get these results on a regular basis and this is a step in the right direction, he will be hoping to carry this form into the next GP’s. After the UK GP we have sand races coming up so he should be fast at those.

A shout out to Dennis Ullrich who rode incredible in the second moto, he got a good start and was running in fourth for seven laps, that takes some doing! He ended up crossing the line in a fantastic sixth position, he would have learnt a lot by following the fastest riders in the world. Tenth overall for the German in an MXGP full of talent is very impressive. German fans will be hoping he can keep those rides up and they could be looking good for the Motocross Des Nations!