MX2 & MXGP: Who impressed in Assen? 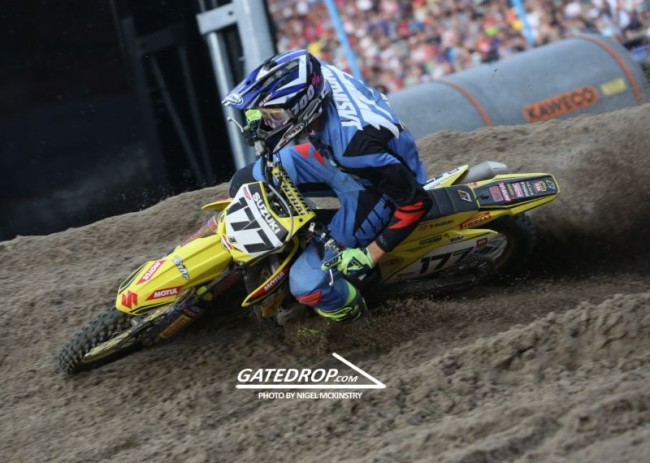 After a slow start to the season for Brian Bogers he has come to life in the second half of the season!  Assen marks his second podium of the year as he ended up second overall. He put on a great show in front of his home fans and was so close to passing Herlings in the first moto! Two third place finishes were enough for second overall. Bogers is currently eighth in the championship and has missed three rounds due to injury. I fully expect Bogers to be a consistent top five rider in 2017 with plenty of podiums, wins won’t be out of the question either! With Bogers riding great Holland could be very dangerous at the Nations.

A fantastic weekend for Jorge Prado ending up third overall. Remember when people said we might not see another talent like Ken Roczen or Jeffrey Herlings for another ten years? Well, then along came Jorge Prado. He already has his first MX2 podium at fifteen years old. He just needs to improve his hard pack riding and then he will be challenging for podiums every week. Another winter on the 250 will also help massively. It’s hard to believe he was riding a 125 just last year!

The first MX2 moto was just mayhem! There were a lot of crashes but it worked out perfectly for Thomas Covington. Paturel and Sterry both led but made mistakes that cost them and then all of a sudden Covington had a massive lead! He rode a smart, consistent race without making too many mistakes and won his first MX2 moto of his career. It must have been a great feeling for the American. Unfortunately, he went from hero to zero after a bad start and crashes in the second moto but that still won’t take away his first ever moto win.

It was a great weekend for another Dutch rider, Lars Van Berkel. Lars had a great first moto crossing the line in fourth and hanging it out with the front runners. The second moto wasn’t quite as good but fourteenth is still a solid result. It meant he ended up tenth overall on the day, not bad for a privateer! Next year will be Lars last year in the MX2 class, hopefully he will be able to line up at all the European MX2 rounds.

Bas Vaessen and Thomas Kjer Olsen deserve shout out’s for finishing up fifth and eighth respectively. It could have been so much better for Bas as he had great speed on the day but he continues to make mistakes, it must be very frustrating but hopefully he can work to minimize the mistakes he makes. It was TKO’s second GP of the year and he marked it with a fifth overall, a brilliant result as it’s not always easy stepping up from EMX250. If the results in Switzerland and Assen are anything to go by he could be great in 2017! Another rider that has developed well with Bodo Schmidt.

Kawasaki’s Clement Desalle isn’t known for his sand riding but he put on a good show in Assen and finally got the overall win he has been searching for since getting back to full fitness. There is no doubt that Desalle is one of the best riders in the world but injuries have held him back this year but the win will help his confidence. It’s a good time to start riding well with the US GP’s and the Nations coming up. Desalle will be motivated to put on a good show and beat some of the top yanks. With Desalle in good form Belgium will also have every chance of winning the nations again.

Before Assen it was a year before Glenn Coldenhoff was on the podium but he put on a good show in Assen for his home crowd. He went 3-3 in the moto’s for third overall. Glenn had a slow start to the season but he has improved a lot over the last few months and we are starting to see what he really has to offer. He definately looks more comfortable on the KTM over the last few weeks and it’s good to see the Dutchman back on the podium.

At a track like Assen it isn’t a real surprise to see Shaun Simpson at the front. Shaun really excels in these kind of conditions. He won the first moto and just controlled a comfortable gap without much pressure from Desalle. However, in the second moto he cost himself the GP win with a couple of early crashes. He showed some great speed and was consistently quicker than the front runners. If Shaun could figure out how to go as fast in hard pack he would become a force to be reckoned with! Hopefully he tries to improve in that area over the winter.

A fantastic weekend for Tanel Leok who ended up seventh overall on a private KTM. That is a fantastic result in such a stacked class. Beating guys like Tixier, Febvre, Bobryshev, Searle and Guillod, Leok should be proud about his weekend.

What a second moto for Arminas Jasikonis! He didn’t look like a GP rookie at all with a fantastic seventh place finish. He looked like a guy that has been racing GP’s all his life but he’s still only eighteen years old! This kid has a lot of potential, we are starting to see why Stefan Everts signed him up when Ben Townley was ruled out for the season. Jasikonis just needs to work on his hard pack riding and then he could become a consistent top ten rider. He has already learnt a lot during his short time at Suzuki and he now has the opportunity to ride the USA GP’s.