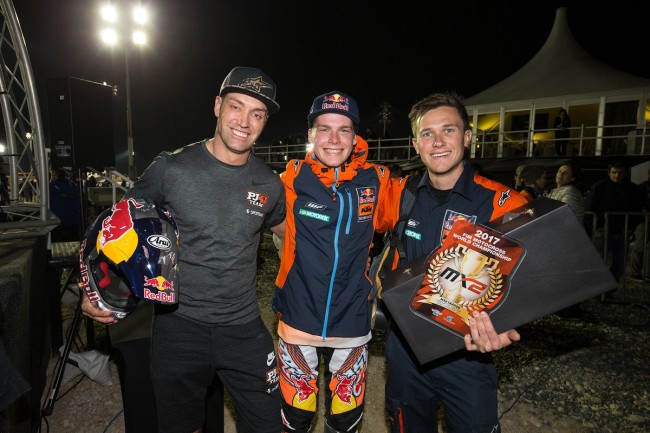 Pauls Jonass won the 2017 MX2 world title in race one in France – but only after a big crash on the first lap!

Jonass went done hard after a great start but, as he has done all year, remained calm, gathered himself back up and rode smart to come back to fifth place from last to clinch his first ever world title.

Jonass said: “Yeah, this was a tough one. Before the race I felt really good because I know I can ride mud but I got a really  good start and fell in the second corner when I tagged abother rider and went down. It was really tough but I knew it was a mud race and I had to stay calm and we did it!.”

It was Thomas Covington, in great form ahead of the MXoN, who won another moto with a brilliant win in the mud from Jeremy Seewer, Jed Beaton a brilliant third and Hunter Lawrence fourth.

In race two it was Hunter Lawrence who ended his season on a high with a storming race win, passing overall winner Thomas Covington who hung rode strong for second to take his second overall win of the season.

Jeremy Seewer crashed while trying get Covington for second and to win the GP, allowing Jonass and Beaton by with the Suzuki rider taking a frustrated fifth.

It gave Jed Beaton a fine third overall and two Aussies on the podium in the world championship!