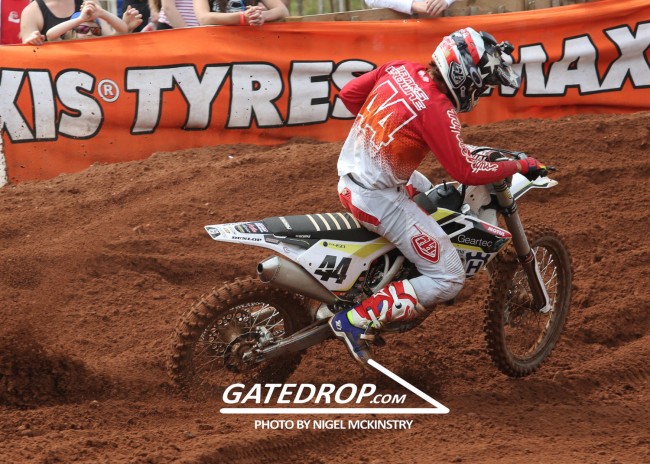 After setting the quickest time in qualifying, Banks-Browne carried that good form into race one and took the race win. He did just enough to fend off Irwin who was applying the pressure towards the end of the race. Rob Davidson, one of the most improved riders in the UK during 2017 ended up a strong third in front of Gert Krestinov.

In the MX2 class, Josiah Natzke won the first race of the day, he crossed the line in sixth which is impressive considering he still hasn’t fully recovered from his thumb injury. Micky Eccles and Mel Pocock ended up second and third respectively in the MX2 class.

During the second race of the day, Martin Barr had the early lead but Banks-Browne found his way through to secure a double victory and fifty championship points. Barr rode well to come home in second ahead of his team mate, Graeme Irwin.

Micky Eccles came home in fifth and the first MX2 rider across the line. He won the MX2 overall on the day from Mel Pocock and Josh Gilbert who is showing this year he can be competitive with a good start. Natzke DNF’d the second moto but the first moto win shows his pace is good, he just needs to put his thumb injury behind him now.

The Expert MX2 class had three races on Saturday followed by one on Sunday. Glenn McCormick took a clean sweep as he won all four moto’s. Jake Sheridan also rode well to finish second, two thirds and a fifth in the moto’s to end up a strong second overall.