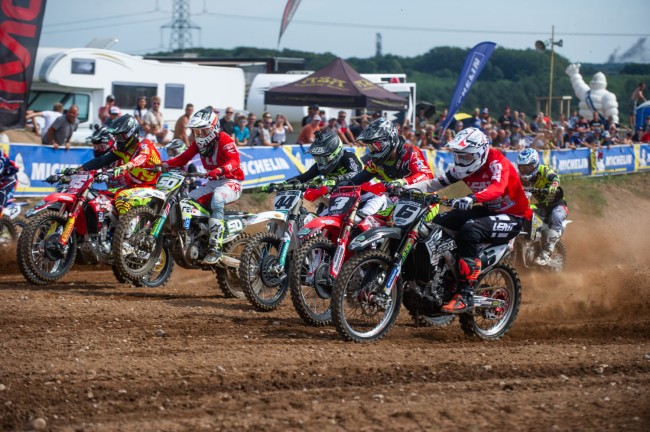 PR- The Michelin MX Nationals enters the penultimate round of its 2018 British Championship this weekend when it takes on the spectacular and demanding Canada Heights circuit in Kent.

Thanks to a two-week summer break in the punishing MXGP schedule, reigning MX1 Pro champ Graeme Irwin (Hitachi ASA KTM) will return to the series for a one-off guest appearance, which could shake things up at the top. He won’t have an easy ride though as, fresh from his double win at the last round at Sherwood MX, Elliott Banks-Browne (Geartec Husqvarna) is on a roll and will be going all out to repeat that performance and taste MX1 victory once more. Jake Nicholls (Buildbase Honda) too will be gunning for glory and aiming high. His two second places behind Banks-Browne, at round four, helped him retain his lead with an 18 point margin over the Husqvarna pilot, but these guys are in it to win it and are rarely happy to settle for anything less. Ryan Houghton (Rob Hooper Yamaha) is next up in the championship charge, but he has a rapidly improving Estonian in the form of Gert Krestinov (Phoenix Tools Honda) just 10 points behind, tying on points with Liam Knight (Trevor Pope KTM). A DNF at Sherwood may well have relegated Micky Eccles (Manchester M/Cs Husqvarna) from third to sixth in the overall standings, but he’s only six points behind Krestinov and Knight and cannot be discounted.

In the MX2 Pro class, leader Brad Anderson (Verde Substance KTM) was still nursing a knee injury at Sherwood and unable to complete the last race, losing valuable championship points. He has 14 pointadvantage over Buildbase Honda’s new recruit Josh Gilbert but can’t afford to be complacent as the younger rider didn’t place a wheel wrong at the last round, taking pole and two class wins – and an impressive second in the combined race one results, between Banks-Browne and Nicholls. They are followed in the championship by Lewis Tombs (Putoline Planet Racing), Alexander Brown (Husqvarna), Michael Ellis(ASA P&H M/Cs KTM), and Taylor Hammal. Thirty six points separate third to sixth and so there is still all to play for. Revo Husqvarna’s Mel Pocock and Martin Barr have missed a significant number of MX Nationals races and, as a result, are uncharacteristically placed down the championship order, respectively in ninth and 15th. It is hoped the Husqvarna pairing will be fit enough to get out and mix it up with the rest of the field at a slightly reworked Canada Heights track.

Elsewhere in the series, Jason Meara took four wins from four starts in the Expert MX2 class at Sherwood and has a weighty championship lead ahead of Ben Clark and Ryan McClean. In Expert MX1, Richard Bird leads Brad Cavill and Ryan Crowder. In the packed-out Clubman classes, Harry Foster, Fabio Rizzi and Brad Thornhill are holding the top three MX2 positions, whilst it’s Aiden Christie, Guy Prince and Harry Fletcher in MX1.

In the Youth classes, Callum Green’s full house of results at round four kept him just ahead of Aaron-Lee Hanson – but with only seven points in it, and four races over the course of the weekend, anything could happen. RFX Crescent Yamaha’s Joel Rizzi increased his lead to 105 points ahead of Dylan Spenser in MXY1, Rizzi’s team-mate Bobby Bruce, who will be riding on home turf at Canada Heights, sits a further five points behind. In the 85s Ryan Mawhinney is stamping his authority on the BW class with Jack Grayshon and Buster Hart in second and third. Over in the SW sector, Bailey Johnston and Ollie Colmer continue to do battle and can be expected to take it all the way to the flag. Arai Elcock rounds out the top three.

Timed practice will start at the regular time of 9am on Saturday, with racing getting underway at 11am for all classes, except the Pros who race only on Sunday when the action gets going at 9am.

Weekend tickets are £15 on the gate, with children aged 12 and under gaining free admission. Discounted tickets are available from www.mxnationals.co.uk