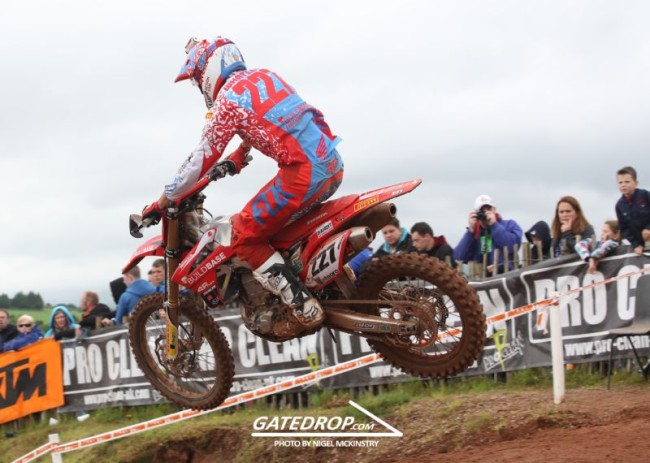 This weekend’s round four of this year’s Michelin MX Nationals travels to the southeast of the country and the Sidcup clubs famous Canada Heights circuit next to the M25 and M20 in Kent.

Riders love the challenging track with most of the classes full it looks like being a fun packed weekend with lots of competitive racing.

Graeme Irwin (Buildbase Honda) will be looking to consolidate his thirty-five point in the pro MX1championship lead over Gert Krestinov (Phoenix Honda) with Brad Anderson (Verde KTM) needing a good result after missing the last round in Dunns.

Elliott Banks-Browne (Geartec Yamaha) is only two points behind Anderson with Josh Spinks (Heads and All Threads Suzuki) and Dan Thornhill (Cab Screens Husqvarna) are within striking distance of the experienced pair of racers.

But points maybe snatched away from them all by a wildcard rider as Frenchman Steven Lenoir (Dyer and Butler KTM) will be definitely mixing it with the leaders.

MX2 series leader Martin Barr (Buildbase Honda) will want to make up for a disastrous Maxxis round last Sunday and rebuild his confidence to maintain his thirty-six-point advantage over second place man Lewis Tombs (Geartec Yamaha) who won the experts class at a centre championship event at this venue a couple of weeks ago.

Jake Millward (Verde KTM) is in a strong third place in the championship but behind him eight riders are within a race win of him.

But like the MX1’s a wildcard entry may steal valuable points away from the leaders as Mel Pocock (Hitachi Husqvarna) will want to get on the podium after missing out by just one point at the last British Championship round.

The Bell expert MX1 championship chase is hotting up as Shaun Southgate (Herts MX Honda), Luke Parker (Herts MX Honda) and Brad Cavill (KTM) are separated by just seven points at the top of the table, while in the Fly expert MX2’s Henry Williams (RFX KTM) had a sixty-point lead over Adam Wells.

Michael Ellis (P&H KTM) has Taylor Hamell (Dyer and Butler KTM) closing in on his lead in the MXY2 class after an overall win at Dunns but with still a load of points up for grabs before the end of the year Jamie Carpenter (Holeshot KTM) and Dexter Douglas (Husqvarna) are not out of the picture yet.

In the 85’s Joel Rizzi (RFX KTM) has a commanding lead over Sam Nunn (GMX KTM) in the big wheel, while Ike Carter (MBO Power Husqvarna) remains unbeaten in the small wheels.
The Canada Heights track is always well prepared and produces good fast racing and can easily be reached from the M25 and A20 roads.

It only cost the small some of £10 for adults and the kids under ten getting in free, and that’s for the whole weekend, both days which is great value for a family weekend out.
If you want to camp in the Kent countryside its £10 for the weekend but don’t arrive before 2pm Friday afternoon.

If you don’t know Canada Heights post code is BR8 8DX. See you there.