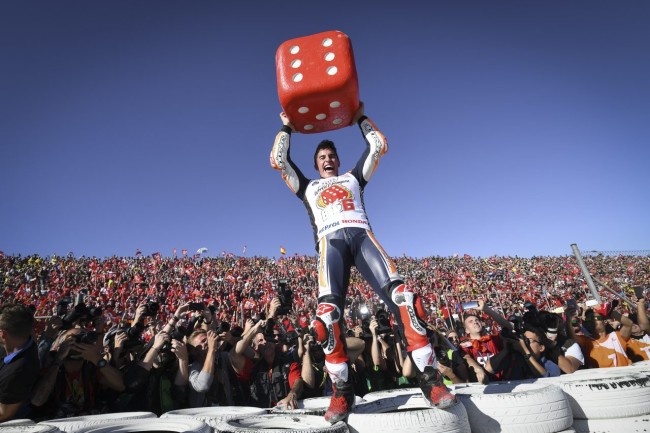 This has been another remarkable and historic Grand Prix season for Honda, with Marc Marquez (Repsol Honda Team RC213V), Honda, the Repsol Honda team and Honda’s Moto3 riders and teams all breaking records today.

Marquez went into this afternoon’s season finale with a 21-point lead, but instead of riding conservatively, he was the same Marc as always: attacking from pole position, leading the first few laps, then retaking the lead in the late stages, moments later saving a scary moment, when he ran off the track and into the gravel at high speed.

The 24-year-old Spaniard regained his composure to cross the finish line in third place and secure his fourth MotoGP crown in five years. He finished the last race of the year less than 11 seconds behind team-mate Dani Pedrosa (Repsol Honda Team RC213V), who took his first victory since May’s Spanish Grand Prix at Jerez and moved up to fourth overall in the points chase.

Pedrosa’s 31st MotoGP victory takes Honda to 287 premier-class races since it first entered the class of kings in 1966.

This is also a record.

Marquez proved everything today: that he a six-times World Champion (four in MotoGP, one each in Moto2 and 125cc), that he has a superhuman ability to maintain control in the most amazing situations and that he is a great sportsman. After the race he immediately thanked his Honda staff and his Repsol Honda crew, then paid tribute to Ducati’s efforts. Andrea Dovizioso (Ducati) had been his main title rival, taking the championship all the way to the final round.

And Marquez has achieved a whole new record. He is the first rider in the 69-year history of motorcycle Grand Prix racing to win at least five GPs per season over eight years, across three categories: 125cc, Moto2 and MotoGP.

The race started watched by a capacity crowd, buzzing with excitement. Marquez led for the first three laps before sensibly allowing Johann Zarco (Yamaha) to take the lead. The last thing he wanted was a race-long battle for victory, when all he needed was an 11th-place finish, even if Dovizioso won the race, which the Italian needed to at least stand the slimmest chance of bettering Marquez’s points haul.

For much of the rest of the race that’s the way it stayed, with Zarco a fraction ahead, then Marquez and Pedrosa, followed by Jorge Lorenzo (Ducati) and team-mate Dovizioso.

By the closing stages Marquez knew that Dovizioso didn’t have the pace to win, so he decided to do what he always wants to do: go for victory. He swept past Zarco, but then lost the front as he rode into the high-speed first corner. The bike fell onto his knee at speed – which would’ve meant a crash for anyone else – but Marquez saved the crash in his own inimitable style, ran into the dirt and then regained the track. When both Ducati riders fell he was promoted back into third place, allowing him to celebrate this amazing title from the podium, in front of his adoring fans. It was another astonishing performance from the man who scored six victories and six further podiums this year.

Pedrosa rode a beautifully judged race, riding behind Marquez until his younger team-mate ran off the track. In the final laps the 32-year-old closed on Zarco, then took the lead as the pair attacked turn one for the 30th and last time. He rode an inch-perfect final lap to take the chequered flag 0.337 seconds ahead of Zarco.

“I’m living a dream. ‘six titles’ are big words. The truth is that I’m incredibly happy because we worked so much this year, and today the race was incredibly tense and exciting – a bit ‘Marquez Style.’ I made a mistake, but I also made my best save of the year. From that moment on, I just tried to finish the race in a good position. I’m sorry that Andrea didn’t finish the race, as he deserved to do so. He had an incredible season and I would have liked to have him on the podium with me today. The key to the year has been our mentality. In our world it’s very important to remain positive and motivated during the difficult moments. Some things happened to us at the beginning of the season but when we found the way to sort things out, everything went better. Congratulations to Honda and the entire team for the triple crown. It’s an amazing achievement. Winning the title at the last race of the season in front of our fans is one of the best things possible, really special. Now I want to enjoy this with my entire team and my family, and after that we’ll start to work for next year.”

“Obviously I’m very, very happy because a win is a win, and this was a very tough and hard-fought one. Today we had a chance because we got a good start and the set-up was working well, so we took it. The track wasn’t easy as front grip wasn’t perfect, and in fact we saw a lot of crashes in the race. I was just behind Marc when he made that save and it was incredible. The smoke, the noise, the speed – wow, impressive! I realized that the track had a limit, maybe because the rear had more grip, which pushed the front. Anyway, I tried to manage the front grip, but then in the last three laps I gave it everything to pass Johann. He was so good into the corners but finally I passed him on the last lap. I’m so happy to have won in front of my crowd, and I would like to dedicate this victory to my family, friends, fans, and the team. This was a fantastic day for all of us, as Marc clinched the rider title and we secured the constructor and team titles. I also move up one place in the championship, and that’s great as well.”