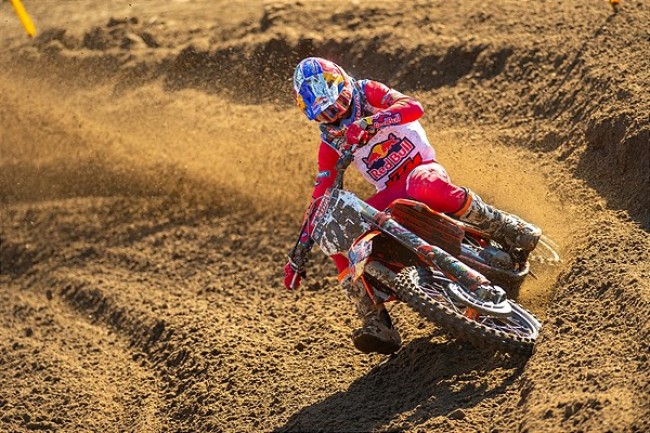 MILLVILLE, Minn. – Coming off the series’ one and only break from racing, the Red Bull KTM Factory Racing Team returned to action on Saturday with Round 6 of the 2020 AMA Pro Motocross Championship at Spring Creek MX. It was a mixed bag of results for Musquin, who raced his way to a podium finish in the first moto but experienced a big crash in Moto 2, where he salvaged a top-10 finish to earn some valuable championship points with sixth overall for the day.

Following a striking moto-win at the previous round, KTM-Supported rider, Blake Baggett, once again put his KTM 450 SX-F FACTORY EDITION onto the second step of the premier class podium with a pair of second-place moto finishes at the Spring Creek National. The day started off well for Musquin, who got off to a second-place start aboard his KTM 450 SX-F FACTORY EDITION in Moto 1 and he battled behind the leader for nearly the entire race. A small mishap in a corner caused Musquin to stall the bike with four laps to go and he was overtaken for second by fellow KTM rider Blake Baggett. Musquin got himself going once again and finished strong on the podium in third.

In Moto 2, Musquin got a top-five start and worked his way up to fourth halfway through. While charging toward the podium battle late in the race, Musquin got sideways and went down hard with about four laps to go. He was able to eventually re-mount and push through the remaining laps to salvage 10th in the moto and sixth overall for the day.

Marvin Musquin:“I was doing great in Moto 2 until having a mishap at the very top of the mountain on the left-hander before you drop off. I lost the rear just a little bit and it got sideways even more while I was flying in the air so when I landed I was still sideways and it hooked and I had a big crash. It was hard to get back up but I was able to get some points with 10th. I’m super disappointed because I was looking forward to getting a podium today but I’m very lucky right now to not be injured.”

Rocky Mountain ATV/MC – WPS – FLY – KTM’s Baggett put on a valiant charge in both motos to narrowly miss the race-win by 1.75 seconds in Moto 1 and 2.76 seconds in Moto 2. He currently sits sixth overall in the championship standings with three rounds remaining.

Blake Baggett: “I’m giving it everything I got, RedBud reminded me that I got it in there and I can do it. I’m really just enjoying it. I’m enjoying being a dad and trying to put it up front [for my son]. The goal is to try to be there at the end and if I don’t win – like today, going 2-2 is awesome but at the same time I was so close to pulling it off – at least they knew I was coming and that’s all that matters, so I’ll take it.”