Musquin on his win at Unadilla! 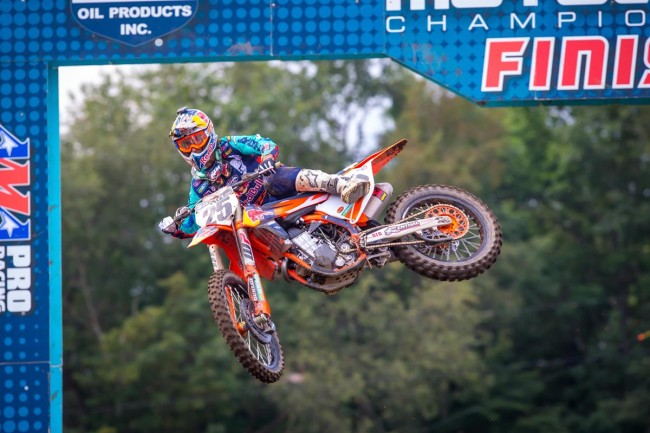 NEW BERLIN, New York – For the third race in a row, Red Bull KTM Factory Racing’s Marvin Musquin dominated the talent packed 450 field and rode to 1-1 finishes and the overall win on the day at the Unadilla National, round 10 of the AMA Pro Motocross Championship held in New Berlin, NY.

After torrential rains wreaked havoc on the race course during the first 450 moto and conditions worsened, Marvin excelled, piloting his KTM 450 SX-F FACTORY EDITION around the treacherous track leading all but 1 lap on the day and taking convincing wins in both races to extend his moto race win streak to 6.

Musquin was third at the start of the first 450 moto and quickly moved ahead. He navigated into second soon after, then made a pass on Matt Bisceglia in the second lap to overtake the lead. He held strong and was still leading at the halfway mark with Blake Baggett right behind him gunning for the pass. Dealing with downpours and pressure from Baggett, he continued to push through lappers and severe track conditions before the red flag came out with two minutes to go to signal the end of the moto and clinch Musquin as the first moto winner.

He pulled the holeshot in the second moto, battled through the tough track conditions, and held strong for the win. The 1-1 finish gave him his sixth consecutive moto win, third consecutive overall win, and leaves him third in 450 rider point standings.

Musquin: “Today was really tough, but I did have fun. It poured so hard and I understand why they had to red flag the first moto because of the lightning. We were late starting the second moto because of the storm but once the gate dropped I did my best to grab the holeshot and lead early on. I knew I needed to ride a smart race out front and not get passed in order to make it a bit easier on myself in all the mud. In moto one I had good battles with Baggett and in the second moto I know Davalos was right there behind me many times. I just wanted to control my races and I think that’s what I did. Nothing came easy though. I nearly crashed on the last lap of moto 2, it was so close, but thankfully was able to keep it together and finish in front. I’m really pleased with myself to go 1-1 in these conditions today, they were tough.”