Musquin on his Paris supercross win: Nothing beats the home crowd! 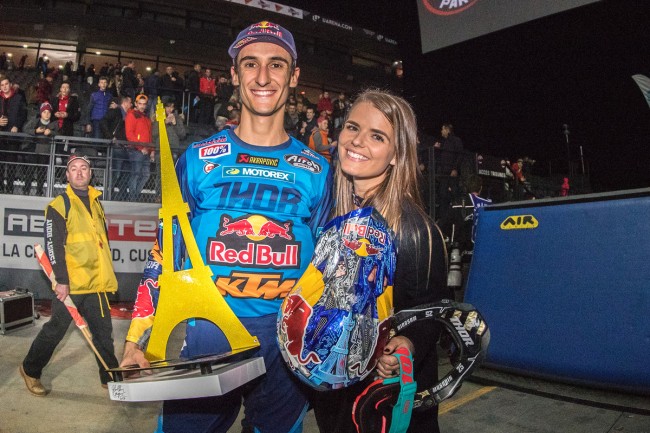 The 27 year old satisfied the thousands of fans that filled the new U Arena in the French capital city on Saturday night and Sunday afternoon by running to the win in both 15 minute and 1 lap Main Events and starring in the Superfinal and Sprint dashes particular to the Paris spectacle that is now reached its 34th edition and was born in 1984.

The recently-completed U Arena offered a vast platform and a wide floor for a track that was both challenging, hard-packed and ‘attackable’ and brought the meeting – Europe’s biggest Indoor motorcycle race – back to Paris after three years at the Stade Pierre Mauroy in Lille.

Musquin dealt with the threat of Zach Osborne on Saturday and Cole Seely with his KTM 450 SX-F on Sunday as well as owning two of the four ‘Sprints’ and both Pole Positions for a comprehensive sweep of the meeting. Along with success in the Monster Energy Cup and the Red Bull Straight Rhythm ‘MM25’ has been invincible in the off-season period.

Musquin: “I feel great even though it was a tough weekend. The level this year – and the track conditions – was so different and it made it tough on me, my bike and the body because of the dirt. I was not totally confident as Seely, Osborne, Wilson: those guys are great riders. The starts helped me. I lost two motos all weekend but got two Pole Positions and both Mains and that was the goal. The stadium was amazing and so were the crowd once again. For sure I miss this. I love racing in the US but nothing beats the home crowd. I could hear them every single lap and turn and that was special for me. My confidence is great.”

2015 MX2 World Champion Jordi Tixier was also back in ‘orange’ for the first time since his motocross title-winning campaign and with a new team prepped for the 2018 MXGP Grand Prix series. Tixier made his bow on the 450 SX-F with seventh position overall in Paris.

Red Bull KTM will begin the 2018 AMA Supercross championship as reigning champions and the seventeen round show gets underway at the Angel Stadium, Anaheim on January 6th.