Musquin and Webb on Southwick 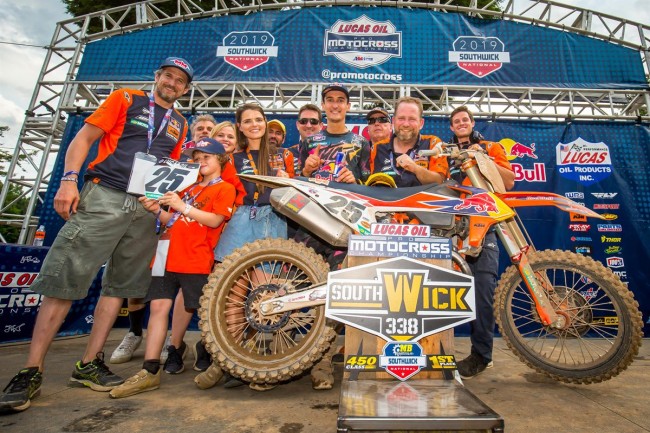 SOUTHWICK, Mass. – Round 6 of the 2019 AMA Pro Motocross Championship proved to be another grueling round on Saturday as riders fought through the humidity and sandy terrain at the notoriously rough Southwick National in Massachusetts. It was a banner day for Red Bull KTM Factory Racing’s Marvin Musquin, whose 1-2 moto scores earned him a second-straight overall victory as the 12-round series reaches its halfway point. His teammate, Cooper Webb, put forth a consistent performance to finish just off the podium in fourth overall.

Following a big win at the previous round, Musquin came out swinging on Saturday as he claimed pole position with the fastest lap in qualifying. In Moto 1, he powered his KTM 450 SX-F FACTORY EDITION to the holeshot and immediately created a gap on the rest of the field. Musquin maintained control of the entire race, leading all 16 laps from start to finish despite a hard-charging pack of riders behind. In Moto 2, Musquin got off to a third-place start and he battled for the position early on. On lap four, he made the pass for second and from there he was able to maintain the position to finish second in the moto. With 1-2 finishes, Musquin claimed the overall win for the second straight week, climbing one position up to second overall in the 450MX Championship Standings.

Musquin: “Qualifying first meant a whole lot coming into the races today. I was so pumped to grab the holeshot in the first moto! It was a long moto, when you lead like that the whole time it feels like forever but it was super important to win that one because everyone was right there. I didn’t get the same start in the second moto but I worked my way through to second and it was good for the overall. It was tough out there physically, but we stayed consistent and came away with the overall.”

Webb, the sixth-place qualifier, got off to a top-five start in Moto 1 and he positioned himself just outside the podium battle early on. He was charging in the fourth spot until he clicked neutral by accident and fell over, thus losing touch with the lead battle as he dropped back to sixth. With a severely bent clutch lever, Webb was unable to utilize his clutch for the remainder of the moto but he persevered and climbed his way back to a fourth-place finish. In Moto 2, he powered his way to the holeshot and early lead before a small mistake allowed him to get passed on lap one. He continued to battle for a top-three for a majority of the race, swapping positions along the way. With a strong finish, Webb ultimately secured fourth in the moto and fourth overall for the day, where he sits sixth overall in the championship standings.

Webb: “Southwick was a step in the right direction for me. The day went well and it’s definitely the best I’ve ridden so far. Heading to RedBud, I really enjoy racing there and hopefully I can get on the podium.”