Musquin and Cianciarulo win at a very tough Southwick! 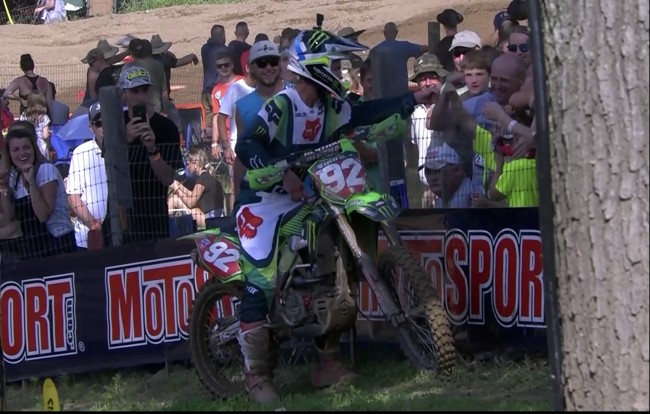 Marvin Musquin took his second overall win in a row to move into second place in the 450 US MX championship as Zach Osborne took his inaugural moto win in the 450 class in the states at a super rough Southwick.

Musquin cleared off in race one, riding superbly after early pressure from Tomac. Eli dropped to fourth for a while as Osborne and Roczen got around him in an intense ie in few minutes but the championship leader rose back up to second as Roczen faded in the heat with arm pump back to eleventh.

Race two saw Osborne get the lead quickly from Webb with Roczen again strong early but the German faded back to tenth as his health wouldn’t let him run his true pace for the full moto, severely denting his title hopes.

Musquin came through to second and held off a charging Eli Tomac who powered from tenth to third but admitted he ran out of steam at the end and eventually settled for third in the moto and third overall.

It was Osborne who held strong up front to take his first 450 race win in America with Musquin second, taking the overall, leaving the former GP men and Aldon Baker training mates, 1-2 on the podium.

Adam Cianciarulo continued his incredible outdoor form in the 250 class and took his fifth overall out of six this season but yet again didn’t go 1-1.

The Floridian aggressively passed rival Justin Cooper on lap one of race one and checked out as Dylan Ferrandis came from sixth but went off the track while challenging Cooper for second and crucially would end up third in moto.

Cianciarulo took the holeshot in race one but Ferrandis, after some bike changes started fourth, and then proceeded to reel in Cianciarulo. At the halfway point Ferrandis made his move for the lead and pulled away but Cianciarulo, showing his maturity, took his medicine and settle down for second and the overall win with Justin Cooper in third after starting fifth and losing touch with the leaders early.

RJ Hampshire rode through the field in both motos for fourth overall but yet again his starts killed his chance of battling for the podium positions.