Motocross of Nations: Presented in Milan! 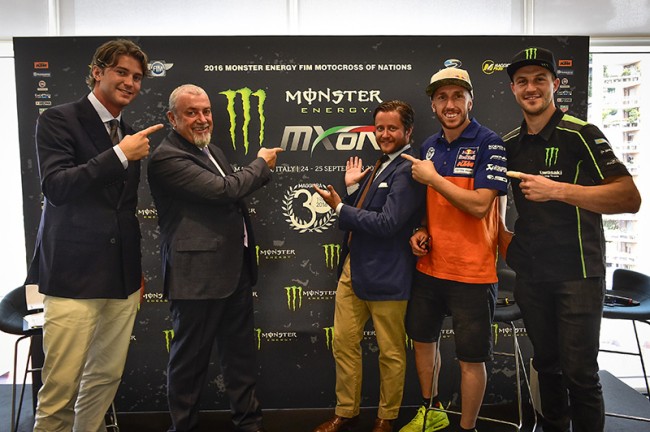 The 70th edition of the Monster Energy FIM MXoNwhich will take place in Maggiora the next 24th and 25th September was presented to national media at the majestic Unicredit Tower in Milan.

Renato Vichi, Head of Media relations at Unicredit in Italy welcomed the public, `We are very glad to host the presentation of this international event here in Milan. I wish the best to everyone involved in the event: organisers, promoter and riders. ‘

Pier Francesco Caliari, General Director of Confindustria, ANCMA, continues, “ It is a great pleasure for me to be here and take part of the presentation of the Monster Energy Motocross of Nations. I personally think ‘off-road’ is a synonym of freedom and creativity and I think it can help to attract young people to the two-wheels world. The owners of Maggiora Park, Paolo Schneider and Stefano Avandero embody this value as well as the promoter of the event, Giuseppe Luongo, that I wish to thank.”

Luca Ferrazzi, Chairman of the Sport and Culture commission of Lombardia took the microphone to express the support from the institutions to this event.

The presentation was hosted by the popular Italian journalist, Pierluigi Pardo, who welcomed to stageMr. Giuseppe Luongo, Youthstream President, and Stefano Avandero and Paolo Schneider, Organisers of the MXoN at Maggiora Park.

Giuseppe Luongo stated, “I’m delighted to eventually be in Italy, my country, to announce the return of the Motocross of Nations in Maggiora after 30 years since the historical edition of 1986. That edition marked the debut of my own company and brought the Motocross to a worldwide level. Since that 21st September this sport has grown considerably and now the Monster Energy FIM MXoN is the most important event of the year without anything similar in other Motorsports, it attracts a huge crowd onsite every year and is broadcasted in more than 170 countries. I wish the best to Stefano Avandero and Paolo Schneider who are investing in that dream”.

Stefano Avandero and Paolo Schneider went on to express their gratitude to all the people involved in the organisation of this event and manifested their enthusiasm in being part of that project.  They also mentioned the track will have some changes comparing to the previous years.

Antonio Cairoli stated, “The circuit is spectacular, I see there are some changes and I can’t wait to ride there, on Tuesday we will go there to train with other Italian riders. After eight world titles a victory at the Motocross of Nations is a great goal I’d like to achieve this year together with my team.”

Clement Desalle went on to say, “The Motocross of Nations is a special event, different from all the others. The crowd is huge and the competition is different. We are working to be there in our top shape”.

A final greeting from Federmoto’s Presidents, Ivan Bidorini  from the Lombardia region and Vittorio Angela from the Piemonte region, concluded today’s Press Conference.

The appointment is for 24th and 25th September in Maggiora for the 2016 edition of the Monster Energy FIM Motocross of Nations.